When Sega’s Space Harrier came out in arcades in 1985 the rail shooter formula as we know it today was practically born. Soon other companies joined the wave of pseudo 3D sprite manipulation with varying effects and not only in arcades, with a few unique rail shooters being developed and released for less powerful hardware such as the NES. Attack Animal Gakuen, translated either as Attack Animal Academy or Attack Animal School, is one such effort. It hardly gets any different from the standard gameplay pioneered by Space Harrier, but the theme of this strange little game certainly is as wacky as it gets.

In this game the player takes control of a schoolgirl named Nokko. For whatever obscure reason she was given the power to fly, which helps her on a mission to save her kidnapped girlfriend from the clutches of an evil animal rebellion. Yes, animals have taken over the world and are now holding people hostage. Trying to come up with a reasoning for such a crazy setting is useless, it's as if George Orwell went all nuts on Star Wars and Japanese fetish culture. I personally loved the idea. Applying it to a rail shooter is the icing on a cake of weirdness, but you know what? Gameplaywise it's not as bad as it sounds, it can actually be pretty fun if you're able to overcome some of the more prominent limitations of the format. 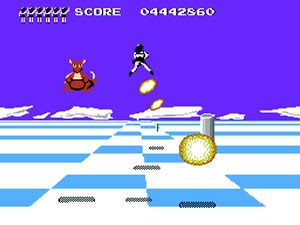 What struck me most when I started playing Attack Animal Gakuen was the slow speed of Nokko's weapon. It takes a while to get the timing right to hit whatever you want - and even when you're done with it you still need to adapt to the slightly iffy collision detection. Tapping the fire button like crazy won't help much because the rate of fire is limited to buffered streams of two consecutive single shots (strange note 1: some people say she fires flower petals; strange note 2: the turbo function in my Competition-PRO controller did not work with this game at all, so there was absolutely no autofire for me this time). Nokko moves rather slowly around the screen, but still fast enough to dodge 99% of the incoming shots and obstacles. How do I know this? Keep reading...

Each one of the six stages develops as a series of specific enemy waves separated by a brief dead space, and then the screen flashes for some seconds prior to a boss fight against some huge animal/creature. It's a simple scheme because there are never two types of active enemies on screen at the same time (meaning enemies that move and have the ability to shoot). All areas do have this one type of obstacle to be avoided, such as trees, cactuses, little volcanos, seaweeds, bushes and pillars. Therefore, basic gameplay will always consist of avoiding indestructible obstacles while anticipating and dealing with each wave that's thrown against Nokko. Very few of these waves are randomly generated, which helps to reduce the frustration with stupid deaths caused by poor scaling and cheap enemy attacks. Crows, spiders and bats are the worst offenders on this matter.

Is there a way to increase the chances of winning? The answer is yes, but I only found out after looping the game once. In a specific point in every stage three Buddha statues will scroll by on ground level. Shooting at them will make you think they cannot be destroyed so the natural reaction is to avoid. What a way to help the unaware Western player, Pony Canyon! These Buddha statues are there to be taken as power-ups! The first one will increase the rate of fire to 3 shots per stream, the second one will increase Nokko's speed, the third one allows her to shoot streams of 4 bullets, the fourth is a further speed-up and the fifth statue will give her with the ability to destroy even the regular indestructible stationary obstacles. Dying will strip away all upgrades you might have taken. I did not figure this out alone, guys, credit should go to this great strategy page. The only thing to have in mind about the statues is that their position is always random, and sometimes it's tough to get them because they're either too far apart or they appear right behind a cactus or some other deadly obstacle.

Even if you don't have the enhancements provided by the Buddhas Attack Animal Gakuen isn't impossible. As with all rail shooters, the rule of thumb is to keep moving. There's only one instance in the sky stage (6th) where a turtle will shoot one single unavoidable bullet. I know this because initially I practiced in an emulator without knowing about the power-up statues. Default speed isn't a problem anywhere else, in fact it's actually more desirable against some of the bosses.

Deeper details in gameplay are related to how to deal with bosses and how to approach some of the more intricate waves. Whenever the bouncing armadillos come I always flee to the top right of the screen where they can't reach me. Beware if you can't kill kangaroos and starfish fast, they shoot off the screen very quickly and might take you with them. Orbs and mines might be stationary, but it's common to crash against them because your bullets are slow. Aside from movement pattern all bosses behave similarly and die only when their minions are destroyed. As you destroy minions the boss's rate of fire increases. Later bosses are tougher, but since minions are worth so many points and it's pretty common to earn one or more extends per boss you can take advantage of the brief invincibility window of each new life to waste away many of them. By the way, 500.000 is the amount of points you need to score in order to gain an extra life.

Attack Animal Gakuen also has a 3D option to allow the game to be used with the Famicom 3D system (activate it by pressing SELECT at any time). I don't own the goggles, so I can't say how it feels in 3D. The game is colorful, with crisp graphics that complement the scrolling checkerboards and upbeat, albeit repetitive music. It doesn't feel choppy, it doesn't ever slow down and flicker is insignificant. Some details are neat, such as the heroine's outfit changing as the stages unfold - watch as even the life stock display changes accordingly. She even wears a swimsuit in the underwater level! This is one of the reasons why despite the inherent ripoff stench this game is actually a charming one if you fancy rail shooters and the NES.

Once you lose your last life the game is over, no continues allowed. However, once you memorize the tougher enemy waves and figure out how to beat bosses more confidently the game becomes manageable due to the constantly earned extends. That's good and bad at the same time, since after the end credits roll and the game strips you off your lives for one million points each Attack Animal Gakuen restarts with no change in difficulty whatsoever. As I noticed nothing would change upon reaching the 4th loop I decided to crash against the first enemy and die. The resulting score is shown below. 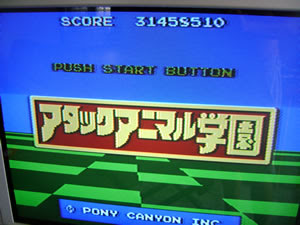