XBLIG shmups are a complicated matter in the world of virtual releases of today. It's getting more and more difficult to fish the good ones out of the ocean of mediocrity that plagues the service, so I'm moving on through the back catalog of shmups I have already downloaded in what I have baptized as my "2012 discovery campaign" (quick XBLIG shmups to rest my head from heavy bricks such as Raystorm). For the last relaxation sessions I chose a title that kinda suits the sentences above: MechFish is a horizontal shooter totally set in watery grounds. Close to but not really embracing the aesthetics of a cute'em up, this game is more of a methodical environment blasting than pure bullet dodging. "Relaxing" is a relative word to be applied here, for there is no room for sloppiness if you want to pursue a 1CC on this game. Looks may be childish but the challenge definitely isn't, at least for the XBLIG average shmup level.

The story goes like this: the plans for the MechFish - a remote mechanical recon device - have been stolen and used to create an evil counterpart named as the DeathFish. Armed with reflexes, a high powered vertical propulsion system and an unlimited supply of explosive bombs and missiles, MechFish must swim through dangerous enemy waters, dodging mines and destroying DeathFish along the way. Start a credit by choosing one of the save slots and get familiar with the basics in the mandatory tutorial. You can't start a new journey unless you play the tutorial, but that's okay since this "stage zero" is rather short and adds a few points to the final score.

MechFish makes extensive use of a very reduced set of sprites/enemies to deliver 14 levels (not counting the tutorial) of aquatic perils. It goes a bit overboard on its length and tends to get repetitive if you're searching for a quick romp. There are no bosses and graphics are of borderline Flash quality, presenting no variety at all during half of the game. All these aspects shouldn't be a good sign, but the mix of different obstacles, offbeat gameplay and the emphasis on a classic shmup structure offer an interesting challenge for those willing to take the plunge. People can still continue over and over after dying, but the score is reset every time you do this. With only four lives and no extends whatsoever, completing the game in a single session is a task reserved for persistent players with sharply trimmed reflexes. 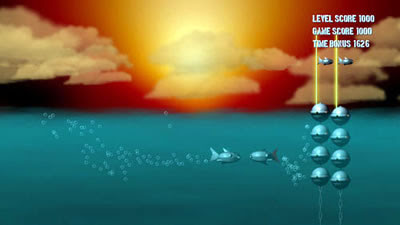 A deadly encounter against a beautiful sunset

Though it might seem a bit weird, the use of both analog thumbsticks works really well in this game. The left stick is used to move the MechFish, while the right stick offers the abilities to jump out of the water (press up) or dive (press down, hold it to stay at the bottom). Shooting missiles is done with the right trigger, dropping bombs is achieved with the left trigger. Scrolling speed can be influenced by the player: staying at the far left will lower speed to a minimum, moving to the far right makes the screen scroll faster. The MechFish will only occupy the left side of the screen at any time, so that there's always some room for you to react to whatever comes your way. Faster swimming is rewarded by a better time bonus once the stage ends, but gets quite risky later on.

Assuming the DeathFish are mechanical creatures, there are absolutely no live beings in the enemy gallery. Deathfish can appear in straight or jumping patterns, shooting single bullets forwards. Icebergs and different arrangements of stationary and moving mines make up for the rest of the things you need to work around in order to survive by diving, jumping and moving carefully. Although it seems pretty boring in the paper, the idea actually leads to an entertaining reflex-driven, racing-hybrid shooting experience. Early stages can get dull with repeated plays, but the game motivates you to finish them faster for better time bonuses. Controls certainly get in the way in a few key areas, with obstacles that are apparently impossible to overcome. Active and large foes are preceded by green warnings overhead, while icebergs and mines generate absolutely no warning signs.

A few useful hints I came up with:

All stages display stats for best level scores and best time bonuses, and most of them must be unlocked one after the other to be played. The music is of a subtle nature and fits the theme well, often heightening the tension of patrolling deadly waters. Halfway into the game the first real wall shows up: once you complete level 7 (Earning Stripes 4-4) three stages are unlocked at once, two of them being labeled as "bonus challenges". Well, suffice it to say that the first of these challenges has no bonus at all from a survival standpoint... Missiles are disabled and you can only count on bombs to get through tight moving sections. It's probably the hardest stage in the game, but I suppose it's possible to make the journey less stressful by starting a credit directly on it (use one of the save slots with previously unlocked levels). My 1CC credit was done from start to finish in regular stage order though.

Completing the game on one credit will let you see a special ending screen. Kudos to the developer for having included this neat message, but thumbs down for forgetting to register the 1CC score in the high score table, an almost unbelievable oversight in a rather decently designed shmup. I was glad I had the camera at hand when the credit was over! Note: if the mild controller vibration becomes distracting try switching to a different profile - it seems the vibration is active only on the account that was used to download the game. 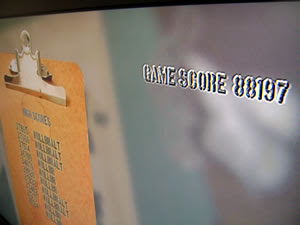