Some time ago I was thinking about playing one of the games from the Capcom compilations on the PS2. I realized that three of the shooters in them formed a kind of unofficial series: Section Z, Side Arms and Forgotten Worlds. Last week I took the PSP with me on a flight and finally dedicated some time to the first title, a pretty charming horizontal shmup that sucked me in completely. Section Z originally came out in 1985, but for such an old arcade game its fluidity and addictiveness are nothing short of outstanding. It's got an exquisite, creative design and provides instant, addictive fun. My first impressions revolved around the idea that the game kinda looked like a scrolling version of Dropzone.

All nine shmups emulated in the first volume of Capcom Classics Collection for the Playstation 2 belong to an early era of arcade games, where graphics and controls were more simple and the company was just another drop in the ocean of arcade developers. The idea behind Section Z is also simple yet very well executed: you are an astronaut sent on a mission to infiltrate an alien base. All areas inside the base are labeled after alphabet letters, starting in section A and ending in section Z. Every five sections the player must battle a boss, thefore Section Z has 5 stages with bosses awaiting in sections E, J, O, T and Z (the last stage is comprised of 6 sections). Once the game is beaten it loops in a harder difficulty.

I love the atmosphere in this game. It's a genuine sci-fi adventure with an old school charm that comes in a sleek shmup disguise - or is it the contrary? Graphics lack parallax and come with nothing fancy, but they're quite varied and get the job done. The atmospheric music is awesome and perfectly sets the mood for some deep underground action. Shmupping elements define the gameplay because the player's actions are restricted to shooting and turning left or right at the press of a button. The act of shooting will not only fire your shotgun horizontally, it will also drop bombs in a downward arch towards the direction you're facing. Enemies will appear from both sides as the screen scrolls in all four directions, and since there's very little room to breathe between one section and the next strategy and knowledge of the terrain and the enemies are essential to have a chance at survival. 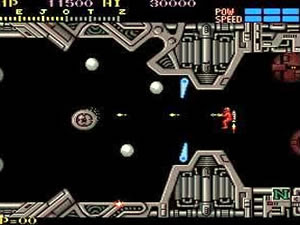 Following the descent into a surface hatch our hero finds himself inside a tunnel with some sort of mechanism with hose gears in the background. In the first section danger kicks in slowly, with only a few slow turrets here and there, a couple of flying drones and waves of spineless saucers. Then things start getting warmer. Green stacks expel smoke and more flying creatures approach from both sides as tricky-positioned turrets fill the screen with bullets. Turn right, turn left, shoot, be proactive and survive. Release items by destroying the small dome structures on the ground or on walls: P gives you more firepower, S increases the speed and B provides some bonus points. Speed and power can be upgraded in three steps (displayed in the upper right corner), but everything is lost when you die and get sent back to a previous checkpoint.

One of the refreshing aspects of the gameplay is the fact that you can touch and lean against walls with no harm. The astronaut is able to "land" on flat horizontal surfaces - while landed check out the cool animation when you fire and drop bombs. Landing and hiding behind walls often helps to hit special targets and herd or avoid incoming enemy fire, especially in the shaft descent of the 4th stage. Speaking of which, scrolling direction is what helps keep the game dynamic throughout: the first stage flows from left to right (A-E), the second stage flows upwards (F-J), the third stage scrolls from right to left (K-O), the fourth stage is the aforementioned descent (P-T) and the last stage (U-Z) resumes the initial scrolling direction. It works as a progressively dangerous spiral of death, with increasingly tougher sections with hardly any repetition in level design. The hardest parts for me are the stone barriers of stage 2 (wrong timing leads to frustratingly stupid deaths) and the second half of stage 4 (those sneaky moving eyes are a pain). The pinball area of section N is also tricky and often caught me off guard.

Despite the somewhat harsh difficulty that heavily rewards memorization, Section Z has an evenly spaced assortment of extends: first one with 30.000 and another for every 70.000 points afterwards. There's also a hidden 1UP that does not compute in the life stock counter (you don't see it decrease by one when you die). Just before section L is over there's this lower platform with a power-up dome that releases one of those tiny creatures. Keep hitting the dome spot to uncover a heart and destroy it to register the 1UP - my method is to stay in the upper platform and hit it with bombs. Some secrets for scoring include hidden objects which are also uncovered in a similar fashion in sections B (a head on ground level, 2.000 points) and H (a hand on the left wall amidst a group of four consecutive turrets, 5.000 points). Every once in a while you'll find a transmitter dish inside a dome that yields 10.000 points if you keep shooting at it for a brief while. Last but not least, speed-killing bosses results in better bonuses since they have a timer that's converted in points once they die.

Given the nature of the game it's safe to assume there are probably more secrets. I didn't get to find anything in the 4th and 5th stages, for example. There are lots of corners to explore, so maybe in a future endeavor I might dig it a bit further. As I mentioned above I first started playing Section Z by means of the PSP version present on the Capcom Classics Collection Remixed compilation, so when I fired up the PS2 disc I had a good idea of what was ahead of me. Both versions are pretty much the same, down to the minor graphical glitches in the emulation (if you kill something close to a side border you might glimpse its final animation on the other side). Other than that the game plays just fine, and the fun factor is definitely aided by an optional autofire switch, infinite continues and an alternating two-player mode.

I'm not sure if Section Z was the first horizontal shmup to allow bidirectional shooting, but it should certainly be included in the first batch of influential titles within the genre. I would love to see a proper sequel with the same mechanics, meaning a jetpack-propelled explorer fighting his way through non-stop auto-scrolling stages. The picture below shows the reward from my best Section Z credit playing on NORMAL. Result: section S reached in the second loop (4th stage). 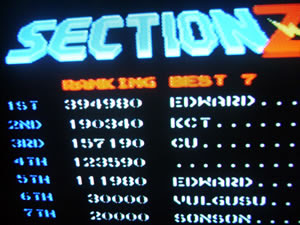