Shooting left and right was a concept pioneered by Defender. Great success in the arcades, Defender allowed the player to attack aliens from both sides of the screen and control scrolling speed at the same time. Many similar shooters followed its trail, but as far as I can tell associating the same bidirectional controls with automatic scrolling was only seen five years later with Capcom’s exquisite Section Z. Following the cool experience of that game Capcom continued their venture into the same gaming style with Side Arms, originally released in 1986. Some people refer to it as Side Arms - Hyper Dyne, as seen in the small subtitle at the start screen, but the shorter and less clunky Side Arms sounds better to me.

For those with no access to the arcade version, Capcom Classics Collection Volume 2 on the Playstation 2 is one of the legal ways to play Side Arms at home. The compilation is definitely a must have for any Capcom and arcade fan since it includes titles from several genres and a handful of other shmups. Side Arms is completely customizable with button mapping, optional autofire, multiple difficulties and general tweaks. I recommend turning off “infinite credits” if the player wants to have single credit sessions because once the credit is over pressing any active button will trigger a continue.

Piloting a giant space mecha across non-stop landscapes to destroy evil aliens is the heart of the mission in Side Arms. There are no fade-outs or intermissions between stages, just kill the boss and keep moving at the same steady pace, reacting to whatever hazards come from all sides. One buttons shoots right, another button shoots left and a third button is used to switch weapons. Weapons aren’t at your disposal from the start, it’s necessary to pick them up along the way. There lies the basic rule of the gameplay: icons are released by defeated enemies and change/cycle when shot at, so they must be sorted out until the desired function appears. In a few occasions fixed items will be released for direct pick-up (shooting them won’t do anything), often prior to boss fights. That’s the game giving an explicit hint that should be read as “use this weapon, it’s the best one”. 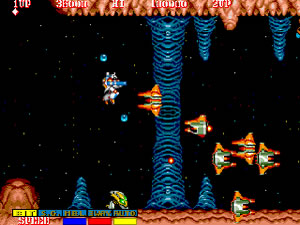 Infested caves need to be purified of all alien evil

Icons will cycle in the following manner: Pow, bit, Pow, SG, Pow, MBL, Pow, 3way, Pow, mirrored Pow (woP) and either a star or a yasichi (looks like a lollipop). Once the star or the yasichi is reached the icon won’t cycle anymore. Contrary to the standard assumption, instead of upgrading weapon power Pow increases the speed, with the mirrored Pow working as a speed-down item. Speed level is displayed by the three colored blocks below the weapon array. Now to the weapons: bit adds an option that circles the character and provides a bit of extra firepower, SG is a fan-shaped short spread pattern, MBL is your good old straight laser, 3way is a spread weapon with actual reach and "auto" depends on which of the last items you get (the star adds vertical shots with autofire and the yasichi adds autofire to the basic shot). All weapons can be powered up once by taking another item of the same type with the exception of the bit - it's possible to have up to three of them. Any currently weapon used is lost upon death.

Weapons are important, but even most important in Side Arms is the item that appears alone and alternates quickly between the Greek letters α and β. It invokes an armor that involves the mecha and fires auxiliary weaker shots in 8 directions, also providing protection against two hits (on the second hit the upgrade will be lost). In co-op the α/β item behaves in a different manner, combining both players into one whose control functions are shared by both parties. Losing the armor reverts it back to separate entities. α/β items always appear from selected enemies or by hitting certain areas in the screen, some of them unsuspectedly hidden (look for corners and flat platforms). Also hidden are 1UPs and score bonuses such as strawberries, cows and golden barrels. Besides 1UPs, extra lives are awarded with every 100.000 points you score.

While the graphic design still holds an underground charm that’s typical to the 1980s, the music in Side Arms is atrociously cheesy. It kinda makes me feel as if I’m playing a game late at night with dimmed lights, a false guilty pleasure of sorts. The action is somewhat repetitive, but the relentless enemy swarm in later levels only made me care about the repetition of bosses (there are only two of them, alternating between each other until the ultimate caterpillar boss appears). Each weapon comes with sprite changes on the character, but I find it funny that after the robot receives the α/β armor it looks like he's with stomach pain whenever he shoots. The effect is lessened if you decide to approach the game as player 2 because the second robot is bulkier and looks more menacing. Another difference is that the 8-way extra shots of the player 2 side work as boomerangs instead of regular outgoing projectiles.

Side Arms can be engaging for a while, but it isn't as cohesive or fun as Capcom's previous Section Z. Although built over an attractive concept, it fails to deliver a long-lasting experience because of some weird details in the gameplay. Explicit flaws relate to how easily confusing it can get. In certain areas you might practically go through a massive solid block, only to get stuck in a tiny tip of the scenery and die. There's a brief spell after losing the armor where the currently used weapon will revert back to the default shot, making the player believe he's lost it. Don't fret and wait for the weapon to resume its duties, if you don't keep the cool and die remember that there's almost no window to breathe upon respawn. That's why consecutive deaths abound while you're learning the game. Parallax is used with moderation but could've been of actual use in the 4th stage: most of the floating specks of mud belong to the background but a few of them will annoyingly get in your way, severely hampering navigation and dodging. On a minor note, stage duration is rather uneven, but thankfully later levels get increasingly shorter as you reach the end of the journey.

Even as irregular as it is I do appreciate some aspects of the game, such as the seamless connection between stages, the way the scrolling frequently goes up and down or the pressure added by those chasing caterpillars whenever the screen is cluttered with other enemies. Activating autofire in the options menu makes any the "auto" weapons useless, so my technique consisted of using mostly 3way for stages and MBL (laser) for bosses. Bits are an alternative if 3way isn't available, but that SG fan-shaped spread is downright dreadful.

In Side Arms the player's initials must be entered as soon as the credit is started, but there's a bug in the Capcom Classics Collection Volume 2: it won't register the result of a 1CC in the high score table of the attract mode. Fortunately it's at least kept in the upper display, as shown in the picture below (Normal difficulty, player 2 side, autofire ON). 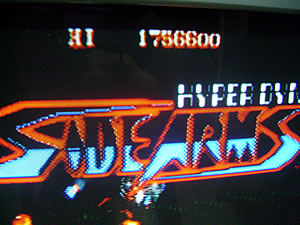