After two shooter entries for the PC Engine CD and a fighting game for the Super Famicom, in 1995 the most explicitly gay video game series of all time received a fourth title released simultaneously for the Playstation and the Sega Saturn: Cho Aniki - Kyūkyoku Muteki Ginga Saikyō Otoko. Allow me to shorten the name to Cho Aniki, we don’t need all those weird words, there’s weirdness enough in the game itself. So much that I consider this the most bizarre shmup ever developed. Even though it’s far from delivering a remarkable gameplay, 32-bit Cho Aniki is a tour-de-force in homosexually inspired graphical design, as wacky as it gets and going beyond what a regular onlooker would consider “normal” for any commercially released video game.

Much of the in-game graphics carry a bizarre touch, especially bosses, but most of the impact in weirdness comes from cut scenes in the introduction and in stage intermissions. Digitized graphics of real actors are all over the place, but in these segments they’re complemented by indescribable voices and groans of typical Japanese overacting. Many people wouldn’t be comfortable playing it in front of an audience. I know people who are sensitive to this sort of thing (lolis are another less extreme example), so if you don’t mind the subject matter prepare yourself for a very… standard shooting experience! Yes, despite the imposing aura of wackiness Cho Aniki is actually a rather straightforward shmup. The formula is pretty simple, much like in the original Cho Aniki for the PC Engine CD. 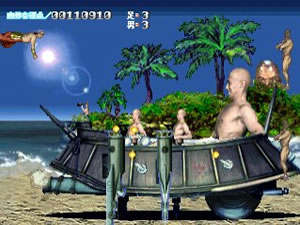 Now you two traitors get back here at once!

Adon and Samson are back to supporting roles after starring in Ai Cho Aniki. They are the aiding pair of Idaten the guy. Benten the girl, on the other hand, has the help of two child angels. Apparently, Idaten and Benten are summoned by an elderly pervert to stop an evil muscular man with a horned helmet who’s coming to destroy their world. You even get to control the other side of the conflict by guiding the huge muscular man in two intermission levels where you only fire a huge beam from his head while killing stupid little creatures. These intermission levels take place at the very start of the game and between stages 6 and 7. You get no points at all from them, but the most interesting thing is that the muscular man has only one life - if you let him die the credit is lost. Well, if he’s dead there can be no real fight against a final boss, so perhaps that’s why the game ends.

Cho Aniki on the PS1 uses almost all controller buttons. Fire with □, use a special attack with × and toggle helper position between fixed/moving with ○. Shoulder buttons control speed selection (L2 /R2) and special attack selection (L1/R1). Most larger enemies release protein globs that must be collected to power up the character and its helpers, and as you collect protein you also acquire successive special attacks (seen below the score counter). The more powered-up you are the more specials you have, kinda like what Psikyo did on Sol Divide. Special attacks vary from the trademark Cho Aniki laser attack to smart bombs or sheer firepower enhancement. Frankly, I used only the laser because it’s extremely powerful and provides instant invincibility, but feel free to try the others.

Benten seems to be slightly more powerful than Idaten, but playing with her has a few disadvantages. One of them is that while all other characters appear half naked she is shrouded in rags from head to toe, almost as if she was wearing a burqa. Okay, seriously now... Her speed range goes from 1 to 5, whereas Idaten can select speeds from 1 to 8. Adon and Samson are larger, consequently they offer better protection against incoming bullets than Benten’s smaller angels. Be careful when using them as shields though, if helpers absorb too much damage they will quit shooting and enter a sleeping state. If you get to the boss with a sleeping helper he/she might fall in love with the enemy, leaving you and taking his side in the fight. It’s pretty funny!

Cho Aniki's intro: just a taste of things to come in the game itself
(courtesy of YouTube user PrehistorikMan)

Speaking of funny, Cho Aniki is decidedly known for constantly making the player giggle at the scenery and enemies alike. Imagine a world where the opposition is made mostly of bald men, thin and fat, black and white, their torsos attached to all kinds of animals and mechanical apparatus, sometimes in a disturbingly shady fashion. Voices abound and more often than not blend with the music with mixed results. The game’s soundtrack is great, ranging from typical Japanese tunes to uplifting pseudo-techno compositions. In that sense, the creative excellence of the game is undeniable. Granted, some background graphics are lacking, but at least most of them have several layers of parallax scrolling, or even 3D effects that create planes above and below the player. On a side note, a few bosses clearly hint at how Masaya’s design evolved since the days of Wings of Wor on the Mega Drive.

Excluding the fact that a credit starts with three lives and the game offers absolutely no extends, there isn’t much in the way of pressure. It takes lots of protein to achieve maximum power, but provided you take them all you’ll never be underpowered (getting to the wave shot that pierces through everything is a sign that you’re nearly or you've already maxed out). The game is on the easy side, with only a few challenge traps here and there and bosses that become a joke once you've figured out their patterns. In my opinion the trickiest stages are the 8th (cars throwing grenades) and the ones that have lasers (beware of the cheap ones that might take you by surprise, as in the 3rd and 6th bosses). Dying has no influence in firepower, but using a special attack reduces power level by a little amount. Other than that the gameplay is pretty much down to cruising across amusing/creepy settings, marvelling at the bosses and enjoying one of the most unique guilty pleasures in shmup history.

All main characters in Cho Aniki were based off real people, as seen in one of the options in the starting menu that contains a video showing actors posing for the game’s image capture process. I still don’t know how the Playstation game compares with its Saturn counterpart, but I assume they must be pretty equivalent to each other (those who own a PS3 can play the PS1 version since it was re-released for the console’s online service in 2010). Following an obscure RPG entry for the Bandai Wonderswan, the next shooter installment in the series is Cho Aniki for the Playstation 2, released eight years after this one.

Since the game does not buffer or save high scores, the following picture was taken immediately after I defeated the last boss. I played with Idaten on NORMAL and had great campy fun! 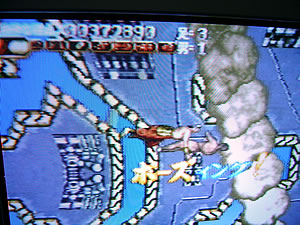