A mere three months separates this release and the previous seemingly identical game for the Playstation. For all purposes both titles are the same, but I had been warned by a fellow shmupper there would be differences. The first hint of this is in the game's full name, yet I'll refrain from focusing on that and just refer to it as Cho Aniki. Those familiar with the series already know why it's so infamous. As for those who're being exposed to it – and to this chapter specifically – for the first time, all I can say is that you'll never experience any other series like this. Or any other game like both 32-bit renditions of Cho Aniki.

I don't comment on that based on gameplay, since the gameplay is the least daring aspect you'll find here. What's strikingly unorthodox are the visuals full of homoerotic motifs and crazy variations thereof. It's one of those cases where you have to see it to believe it, hopefully with no audience unless they're also keen on unique, unexpectedly campy and downright bizarre stuff in a video game. All of it with a slew of glorious digitized graphics for greater eccentricity. That said, what's this game actually about? After the botched experience of Ai Cho Aniki, Cho Aniki on the Sega Saturn returns to the roots of the series seen in the original Cho Aniki for the PC Engine CD, in that you regain control over either Idaten the warrior or Benten the maiden against the hordes of a powerful demigod.

Adon and Samson, the big muscular guys from Ai Cho Aniki, return to supporting roles as the helpers/options that fly alongside Idaten. Benten's corresponding aids are a duo of child angels. All these characters appear prominently in several animated sequences during the intro and at key points throughout the game, screaming or shouting in typical Japanese overdone dialogue. 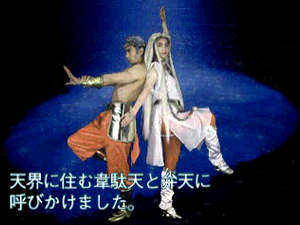 Idaten and Benten teaming up for great justice

Almost all buttons in the controller are used. Shoot with A, fire special attacks with B, freeze helpers with C, decrease/increase speed with X/Y (8 settings for Idaten, 5 settings for Benten) and choose any of eight special attacks (if available) with R/L. All stages are just straight horizontal stretches towards a big boss, with little variation seen in the vertical/diagonal scrolling parts of the underwater 3rd stage (this particular level is also one of the hardest due to the seahorse-men that fire those arching four-bullet patterns). There are two idiotic intermission sections prior to stages 1 and 7 where you control the big boss of the game in a pointless destruction havoc. None of them adds anything to the score and you still run the risk of losing the credit (all lives are lost) if too many tiny men hit you. To make matters worse the second intermission lasts more than three and a half minutes, as opposed to the PS1 version, which is much quicker at roughly over a minute.

Getting ahead of the danger and herding bullets wisely are two very important measures to circumvent the huge hitbox of your character, but the most important one is powering up as fast as you can. Specific enemies release gray protein orbs that upon collection slowly build up your firepower. These orbs are the only items you'll come across in the game and affect not only the power level, but also the assortment of special attacks available. Whenever a special attack is used you decrease the stock for them and lose a fraction of your power. In my opinion losing power isn't as bad as running out of special attacks, so don't overuse them. Since Cho Aniki doesn't have extends, deaths can impose lots of pressure on those who want to clear the game on a single credit. The good news is that you're not powered down upon dying.

One thing I noticed only when playing this version of 32-bit Cho Aniki is that each part of your flying group is powered up separately. That didn't happen at all when I played Cho Aniki on the Playstation, for example. This means that if you want to add more spread to your firepower as fast as possible you should touch the protein orbs with your helpers, not the main character (that can be easily tested in the first level). And if you want to get the piercing wave shot faster proteins should be collected by the main character. That's why sometimes I'd get to the wave shot in as early as the 3rd stage, while other times it would only come late in the 5th stage. Moving helpers around and freezing them in place is the best way to control how you collect the orbs (lean against screen borders to "sink" them into the character). Watch out for the power pick-up voices, which differ for Idaten/Benten and their sidekicks.

Besides adding a precious chunk of firepower, sidekicks can also block bullets with their bodies. Don't abuse this ability though, because if they receive too many hits they'll fall asleep until you've collected some more protein. Sleeping helpers might also abandon you during boss fights, leaving your flanks unprotected. And here's another detail that only dawned on me when playing this version of the game: touching regular enemies does not damage helpers. I figured this out when dealing with the long lines of falling lantern-men in the Japanese house stage.

And this brings me to the subject of differences between versions.

Some of the falling lantern-men have completely dissimilar placements on the Playstation and the Saturn. This kind of difference happens in lots of other parts in the Saturn game, which also exhibits the abovementioned gameplay distinctions with varying bullet speeds/density, alternate animated snippets and even alternate music (in the 2nd intermission). In a sense, it seems the Saturn version was conceived as a slightly tweaked game that increases the challenge a bit. The only aspect that remains the same on both versions are the bosses and their lame attacks, with the exception of the big manly battleship and the completely diverse movement patterns around him on both platforms. The exclusive boss rush in the Sega version seems to be a cheap last-minute inclusion since you need to fight nine previous bosses in separate screens prior to facing the final enemy (the manly battleship and the electric brain are left out).

Kitsch value aside, you can't really say Saturn Cho Aniki lacks gameplay content. With the exception of the stupid intermissions the game is never dull, plus diversity is the visual and musical standout rule (there are some great BGMs to be heard). The scoring system can be exploited for peanuts on some bosses, other than that the game is just straightforward fun with lots of material for trash talk.

I chose Benten to play the Saturn version and got the 1CC score below in the Normal difficulty. There's no high score save or buffer, so I paused after the last boss went down and took the picture. Unlike the Playstation version, which grants a final 100.000 point bonus that can be seen for two seconds only (!), the Saturn game does not add anything to the finishing score. 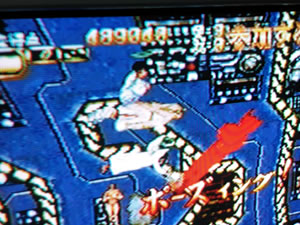 Next: Cho Aniki - Seinaru Protein Densetsu on the Playstation 2.
Posted by Edward at 10:45 PM