Lovers of cute’em ups, take note of another title for you to enjoy with your kids, girlfriends/boyfriends, wives/husbands and all those nostalgic old-school Super Nintendo fans. Looking for an easygoing fix to relax or spend a lazy afternoon with? Or maybe just on the lookout for an easy game, period? The Japanese-only Flying Hero serves all these purposes with undeniable gusto. Drawing vivid inspiration from Konami’s Twin Bee franchise, it starts off with the same goofy story about a princess kidnapped by a deranged bad guy, soon flooding the TV screen with lots of colors and all sorts of mode 7 effects.

The only thing I’m not sure about in this game is what you’re supposed to be when playing it. Going from the witches that constantly appear as bosses and mid-bosses, obviously it’s a universe where magic plays a big part. My best guess is that the protagonist is either an egg or a marshmallow ball, fully clad with flying garments and endowed with wings. As you fulfill your heroic duties you’ll notice lots of creatures of your own kind sleeping, waving or sunbathing on the ground. These details get mixed with several cutely animated enemies, most of them animals: monkeys, insects, bears, pterodactyls, bats, cats, birds, pirate parrots, fish, etc. Unfortunately I saw no penguins, so expect no Parodius references anywhere. 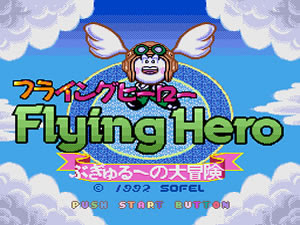 Divided in eight “acts”, the game becomes a breeze in seven of them once you know how to properly use your arsenal. In fact, the control scheme in Flying Hero is one of the best I’ve seen for Nintendo’s 16-bit console, which results in pretty smooth gameplay all the way through. Basics: shoot with button B, bomb with button Y and “bend” shot direction with the shoulder buttons. Pressing L directs it to the left diagonal, pressing R directs it to the right diagonal and both L and R make the flying egg shoot backwards. However, all these inputs are of no use if you don’t push SELECT to change flying speed as soon as the game starts. There are three speed settings to choose from (check the feathers on the upper left) and you always start with the slowest one, which is pretty much useless.

Managing the items released by pink balloons is also of great importance. Three of them are used to select the desired weapon: ice/egg balls, puffs of cloud or lightning. Small cupcakes increase the weapon’s efficiency whenever three of them are collected. The large cupcake acts as a shortcut and sends the weapon to its maximum power at once. Remaining items consist of extra bombs and a little cat-face that activates a homing cat-shot fired in couples. All weapons and the homing cat-shot have three levels of power, with power level being easily distinguished by the number of streams in each weapon. When you get hit the weapon gets reduced by one level, and death only happens when (1) you’re at the lowest level with no homing cat-shot or (2) when you get crushed by a scrolling obstacle.

Even though you can be satisfied with all weapons, my favorite one is the ice/egg balls. Puffs of cloud are powerful but have a slow firing rate, whereas the lightning suffers from short reach. On top of that, whenever you switch weapons you must build up their power from zero, and that’s quite annoying to say the least. That’s why I always avoided puffs of cloud and lightning during the whole game. As for the small power-up cupcakes, from a survival standpoint it’s always best to have two in stock and avoid all others because once you get hit it will take just another cupcake to return to your previous power level. However, if you want to score higher you’ll be inclined to take all incoming items since each one of them is worth 200 points. The game is considerably easy anyway, so with the exception of the icons for puffs of cloud and lightning greed mode was always on for me.

Speaking of difficulty, reaching the final stage should be absolutely no big deal for a seasoned gamer. The bulk of the challenge lies in the fight against the final boss, as if the developer had left all the hard work for the poor guy to do. All extends achieved by then are extremely helpful, and even though I can’t really tell when these extends are granted (there seem to be other mysterious variables involved other than scoring), it shouldn’t be hard to have lots of them by the time you reach the final stage without dying.

Besides excellent controls and cute design, another aspect that stands out in Flying Hero is the number of large enemies throughout the game. There are at least two mid-bosses per stage, sometimes even four. Not really dangerous in themselves, they add a sense of variety that gets extended to the gameplay, which is totally free of slowdown or any other related technical hindrance. Graphically one of the most interesting stages is the one that has tetris-like blocks and turns into a brief maze towards the end. That's where you're most likely to die from squeezing, simply because there aren't any other levels filled with tricky obstacles (large walls in the mountains and gate sections do not count).

To gain access to the options press SELECT at the start screen. All messages appear in Japanese, but don't worry about settings if you want to play in the Normal difficulty (it's the default). As easy as it is, at least Flying Hero entertains while it lasts, and once the credit is finished the game halts at the screen below. I played on Normal. 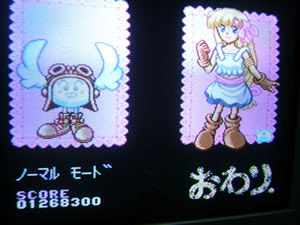