Take Cotton, mix it with Parodius and infuse it with a wacky storyline. Keio Flying Squadron could pretty much be the result of this combination. Since the original Japanese game contains heavy doses of Japanese animation, text and dialogue, the fact that it also came out in other regions with decent English translation/dubbing is nothing short of astonishing. The North American version in particular is quite rare, but any of the Western releases is worth the search if you value anime design with humorous storytelling. Of course the shooting part of the game remains the same for all versions, and that’s what matters most if you’re into shmups.

The name “Keio” refers to a brief span of Japanese history during the 19th century, a time when industrial development was blossoming and Japan was in friction with many foreign countries. The story of the game is supposed to take place in that era, but of course it doesn't take itself too seriously (for example, you need to fight a crazy general from the United States navy in stage 3). A 14-year old teenager named Rami is the star of the show - never mind the Sega CD version saying she’s 20, that's censorship at work and no 20-year old woman would behave the way this brat does. She’s supposed to be the guardian of a sacred golden key that’s stolen by Dr. Pon, a super intelligent raccoon who wants to turn the world into a raccoon paradise. Rami’s grandma goes nuts and tells her she’ll have no food until she gets the key back, so there goes Rami and her pet dragon Spot (Pochi in the Japanese version) on a mission to recover the golden key. She’s childish, lazy and totally unaware of the danger she constantly runs into. Grainy FMV sequences open and close the game, whereas colorful cut scenes make it evolve from stage to stage. These animated intermissions create a lighthearted, lovely atmosphere that works well as a complement to the main game. 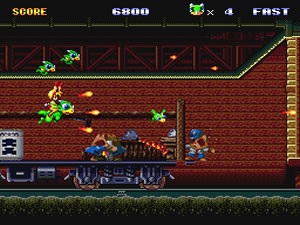 Being a dragon, it’s only natural that Spot shoots fireballs. That said, he’s able to fire two types of them, a straight one (default) and a spread pattern. This primary weapon is changed or powered up by taking the corresponding icon released by hitting a fan-propelled monkey, the bringer of all items in the game. Secondary weapons appear as three types of missiles: air-to-ground Darius-like bombs, directional explosives and homing baby dragons (which look like parrots to me). Both main and secondary weapons are fired simultaneously by pressing B, and are upgraded by successively collecting the same item. These keep circling and cycling as they leave the screen slowly, so take your time to snatch them when it’s safe. Once Spot is fully powered up, any extra item will be converted into 2.000 points.

Besides knowing your weapons, in Keio Flying Squadron it’s very important to use the two helpers/options that are automatically created once you stop shooting. Each one takes around three seconds to materialize, but once they do you’re given an extremely important firepower aid. Helpers trail you around like the options from Gradius, and can be “sacrificed” in a kamikaze special attack. By pushing button C one of the helpers is sent forward in a spread pattern of fireballs that can even block enemy bullets. Afterwards you need to refrain from shooting for a brief while to get the sacrificed helper back.

When you go a long stretch in the game without sacrificing any helper, the impression you get is that the game is easy. However, depending on where you die things can easily get out of control, with massive loss of lives and shameful credit termination. Because dying powers you down one level and strips you off your helpers and secondary weapons, an instant problem is presented if you’re surrounded by lots of enemies and bullets: quit shooting and wait for the helpers to materialize or face the mayhem with the main weapon only? Once I got to the last boss with over 10 lives in stock and lost all of them because I died as soon as he fired its first laser attack. Honestly, this was probably the most ridiculous GAME OVER of my recent shmupping career.

Keio Flying Squadron is totally old school in its gameplay, with no special tricks in scoring besides milking bosses and not dying to reap the bonuses of 2.000 points from surplus items. It's quite fun and easygoing for the most part, but it also requires memorization and a certain dose of strategy (it's good to switch to ground bombs before the barrier of spinning toys in stage three, for instance). Avoid staying too close to the borders, as mid-bosses tend to suddenly ram into the screen. Don’t stay too centered either, sometimes they’ll just fall over your head or appear out of nowhere (granted, everybody dies at least once in these cases). The last input in the controller is provided by button A, which switches between two speed settings (slow/fast). On default settings they were both very useful to me – I mention default because before starting the game you can adjust how fast you want to fly. Other tweaks in the OPTIONS screen allow you to choose your hitbox position (nice!) and to toggle all in-game cinemas on and off.


No key, no dinner!
(courtesy of YouTube user kingarthurpendragon)

Graphically the game offers good variety with a basic design and almost no effects. It does shine on its enemy roster, which is full of crazy creatures and all kinds of animal and mechanic foes, a good portion of them derived from raccoons. In fact, raccoons are to Keio Flying Squadron what penguins are to the Parodius series. All stages are considerably long with a few empty stretches and clearly defined sections, sometimes abridged by transitions or cut scenes. The difficulty curve pretty much divides the game in two parts, as from stage 5 onwards it does require more careful dodging and positioning. Thankfully there are a few score extends to achieve (30.000 + every 150.000 points) and lots of 1UPs to get, often triggered by fulfilling easy tasks within the stage or by simply finding them (examples: fly over the fish swimming upwards against the current in stage 2, shoot the lower edge of the big ship as you start stage 6). Though it seems to be possible to milk bosses forever, I was relieved to see that they eventually time out.

Much like other Sega CD titles, Keio Flying Squadron has an excellent sound design. The soundtrack ranges from bubblegum to somber, with a few very catchy tunes towards the end of the game (the first theme reminds me a lot of Parodius). Song loops are also longer than usual, and sometimes I let the bosses live longer just to listen to the best part of the boss theme. Lots of different animal sounds can be heard as you play (barks, moos, etc.) and strangely all in-game voices were left undubbed.

Don't let the relatively simple graphics fool you, this game should not be missed if you're into wacky cute'em ups. It's deceptively challenging and ocasionally infuriating. I had a wonderful time with it, playing at full defaults (medium/normal difficulty, default hitbox, slow 2, fast 3), with the 1CC score shown in the picture below. The game does not buffer high scores, so remember to pause once Dr. Pon is defeated to take note of your final score. Note: a hidden catch mini-game can be accessed by inputting a secret code at the start screen, and by using a similar code it's also possible to perform stage select (good to practice since continues are limited). 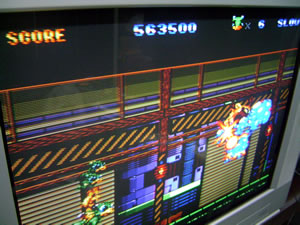 The sequel Keio Flying Squadron 2 was released for the Sega Saturn two years later. It's not a pure shooter, focusing instead on platforming action with a few shmup stints spread along the way.
Posted by Edward at 10:02 PM