Last Saturday I had to wake up early to go through another glucose tolerance test. The objective of this test, in my case, is to measure the tendency I have to develop diabetes. Those who’ve been through this know that you need to collect two blood samples separated by a period of two hours. Now bear with me… Two hours doing nothing in the medical lab on a Saturday morning? You see, that’s what gadgets like the PSP are made for. It wasn’t hard to choose the game I would take with me to keep me busy, since I had just received Taito Legends Power-up in the mail a few days earlier. Out of the rather unimpressive shmup roster included in the package, a particular and unexpected game grabbed my attention: the remake of the mediocre Balloon Bomber, aptly titled Balloon Bomber 2005.

The original Balloon Bomber was as primitive as it gets. A sleep-inducing experience to say the least, and a failed attempt at developing on the Space Invaders idea. The exclusive PSP remake, on the other hand, bursts with color and detailed sprites while offering expanded gameplay and a finite number of levels. In a nutshell, an irresistible way to spend two hours with old school gaming.

Getting acquainted with the new game shouldn’t take less than five minutes. The player controls a tank on a flat surface while a bomber plane crosses the screen dropping balloons in straight lines. Each balloon carries a bomb, and all of them must be destroyed so that you can proceed to the next wave/level. By default the tank is able to fire only one straight shot at a time (button □) and turn around itself to switch the offset position of the cannon (button ○). Power-ups brought by extra balloons can be taken, stocked and activated when needed (button ×), while cycling through them is accomplished with the shoulder buttons (R/L).

Bombs hang from balloons like pendulums, and depending on how they’re hit you might either pop the balloon and make the bomb fall (hit the balloon only) or destroy the bomb and the balloon altogether (hit the bomb). Straight missiles are dropped by bombs themselves (they open up briefly), and arching missiles are released in groups of three by extra bomber planes. Both types of missiles can be destroyed just like anything else. When a bomb or a missile touches the ground it creates a crater that blocks the tank from crossing its path, thus reducing the maneuvering area. Tighter spaces and bombs that fly very close to the ground are the main causes of death in the game - the only good side of dying is that the terrain is completely regenerated afterwards.

Targeting bombs is definitely the best way to clear the screen faster, but remember that all power-ups have the same behavior as bombs, meaning you can also destroy them. Therefore, in order to get a power-up you need to pop its balloon first. Beware though, the last bomb/balloon in a wave works like a screen-clearing device, destroying everything in sight including any power-ups still hanging to their balloons or lying on the ground. Power-ups might appear as temporary speed-ups, ground regeneration (deletes the craters on the side the tank is facing), a single cluster missile, fast shot or increased firing rate (three shots at a time). Unfortunately, all power-ups last for a brief amount of time only or as long as the current balloon wave isn’t wiped out.

Since the game has five stages with five sections each, the variation in graphics, zoom level and basic gameplay help avoid the stench of repetition. There are cool effects applied over the castle backgrounds, such as fogging and rain, but Taito also added more meat to the bone by giving balloons and bombs three strength levels. As the game starts they all go off in a single shot, but soon enough yellow and blue balloons start replacing the initial red ones. Yellow targets take two hits to go down, whereas blue targets take three. Especially tricky are the blue waves that appear very close to the ground and the ones that are zoomed out the most. In the first case it’s always best to target the bombs, in the second case maintaining a close free area is essential to avoid getting dangerously stuck between craters. Aiming is an essential part of Balloon Bomber 2005, and goes hand in hand with the generally slower pace of the game, which isn't that hard and is most suited for relaxing purposes. There are no continues, but extends are granted with 50, 100, 200 and 400 thousand points. 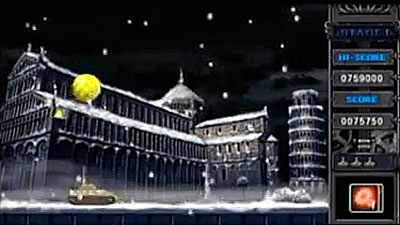 It's snowing in the land of bombing balloons

If you crave the Space Invaders style of shooting there’s no denying that Balloon Bomber 2005 is visually great. I just wish Taito had spent the same amount of dedication on other aspects of the game such as the music, which is restricted to a single boring circus-themed song from start to finish. The complete lack of bosses might also be a bit frustrating for some people. Even though the game tracks best scores, best firing rates and best completion times for each section, there’s no extra bonus for beating these sections faster. In fact, you can milk those arching missiles forever in the very first screen if you so wish. All of this hints at the game being just another lazy rehash of an old idea, or maybe it’s just the fact that Taito has lost touch with its own arcade expertise over the years. In any case, Balloon Bomber 2005 is fun regardless of its limitations and more intricate oversights.

Compared to its Japanese counterpart Taito Memories Pocket, the Western release of Taito Legends Power-up has more games and should be the preferred version if you’re aiming at getting the best package. However, both of them are a disappointment. While Capcom and Konami have made their most recognizable shooters available in similar compilations, Taito stuffed these discs with very old fixed shooters only – apart from Balloon Bomber 2005, the newest one in Taito Legends Power-up is Return of the Invaders, released in 1985 (I'm not counting the unscrolling multidirectional Kiki Kaikai). The compilation fares a little better in other genres, with deluxe/revamped versions of Cameltry, Crazy Balloon and Legend of Kage, but the absence of shmup classics such as RayForce or at least one Darius is a big letdown.

And below is my final 1CC result in Balloon Bomber 2005. I played the game aiming for the quickest possible completion time and had good fun for two hours. For an obscure handheld title hidden in a poor compilation disc, it was a pretty neat diversion. 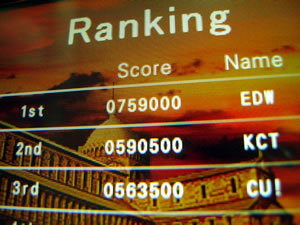 As for the glucose tolerance test, the results showed I'm okay. :)
Posted by Edward at 10:54 AM