Back in 1993, a small game inspired by Asteroids was released for the Amiga computer, called Stardust. One year later a revision came out in the form of Super Stardust, and more than 10 years after that a new chapter would appear exclusively for the Playstation Network. Calling Super Stardust HD a new take on the old formula is an understatement, since the new chapter replaced the thrust controls with a twin stick scheme. Coupled with an astounding amount of color and particles rendered in glorious high definition, this gameplay aspect helped make Super Stardust HD one of the most successful titles on the platform. It was even selected as one of the four "Welcome Back" games offered by Sony as a compensation for the series of outages the system went through in April 2010.

It’s easy to underestimate this game if you don’t actually play it, for on the outside it just comes out as another twin stick shooter seemingly developed on the trail of Xbox 360’s exclusive Geometry Wars Retro Evolved. However, unlike its competitor, Stardust HD actually puts all those flashy HD explosions to good use in a game that has engaging gameplay and an actual ending. It also lives up to its hype once you start playing it, something that does not happen with Geometry Wars at all. In my case, the proof is in the fact that I couldn’t let go of the controller until 2 AM the first time I played the game last week – the same day I knew about Resogun, Housemarque’s new title to be released for the Playstation 4 as a spiritual sequel to Super Stardust HD. I guess motivation sometimes requires just the right degree of pushing… right? :)

The objective of the game is to clear the orbit of a planet and wage war against enemy warcraft while doing it. Given the proportion of your ship and the size of the targets you’ll be destroying, each one of the little planets you’re defending sure has an incredible gravitational force at work. As you move around with the left analog stick and direct your shots with the right analog stick you’ll be able to circle the whole planet in a matter of seconds while asteroids and bombs descend from outer space into your flying level. There’s never any interaction with the planet itself, and considering the amount of mayhem the player’s constantly trying to control chances are you won’t have any time to appreciate its beauty. Detailed textures are applied all over the planet and the objects surrounding it, creating an incredible feeling of 3D that does not interfere with the core gameplay at all, which remains restricted to a 2D plane at all times.


Gold melter all the way!
(courtesy of YouTube user LangleyZeroTwo)

Super Stardust HD’s main game mode (arcade) has five stages divided in five sections/phases each. A hidden timer runs for each section, and beating it before this timer runs out yields an extra bonus. At the end of a phase a series of specific enemies appears, meaning you just have to get rid of them for the phase to end. The final phase in a stage always comes with one or more big, powerful bosses.

Of course blowing up stuff isn’t the only rush you get from Super Stardust HD. Green rocks release items that look like opening lids from soda cans. Three of them are responsible for increasing the strength of each weapon: green upgrades the “rock crusher” (spread gun), red upgrades the “gold melter” (flamethrower) and blue upgrades the “ice splitter” (needle cannon). Power-ups keep cycling between them, so just wait to get the item you want if a different one appears. The power of a weapon ranges from 0 to 100% and is shown whenever you collect the corresponding power-up or when you select it with the shoulder buttons (L1/R1). If a weapon is already at 100% any subsequent power-up will temporarily raise it to 200% for greater destructive power. Other items released by green rocks consist of 1-hit shields (purple), extra lives (yellow) and bonus points (white). Extra bombs show up as orange items, and they're always hidden inside crates brought by a slow moving carrier.

Completing the array of inputs available, R2 triggers a screen-clearing bomb and L2 activates a boost command that sends the ship forward while making it invincible. Boosting capability is recharged according to a gauge in the lower left corner of the screen. Bombs and boosting represent the base of the both scoring and survival, and that’s probably the main reason why the game is so addictive: once you get the hang of it, playing for score becomes one with playing for survival. Sure the risk/reward factor is still there, it’s just that very few games unite both approaches (survival and scoring) as perfectly as Super Stardust HD does.

Take boosting, for instance. If you get dangerously surrounded by falling rocks and bombs, use it to evade and focus on surviving until the recharging cycle is complete. Are several white power-ups floating around? Take them all in a single boost dash and see their value get multiplied by 1 + the number of items collected. If you manage to avoid dying and reach higher multiplier levels, boosting through white power-ups can lead to a great amount of points. By the way, the multiplier is shown in the lower right corner and grows automatically as you play, being applied to every single base/bonus score throughout the game. Regarding bombing, they surely serve the purpose of panic evasion whenever needed, but if you refrain from using them you’ll be entitled to higher bonuses at the end of a phase. The conclusion is simple: if going for a higher score don’t bomb, just dash, and don’t die. Die and see that precious multiplier get sent back to ×1. The good news in this case is that you don't lose any power when you die. 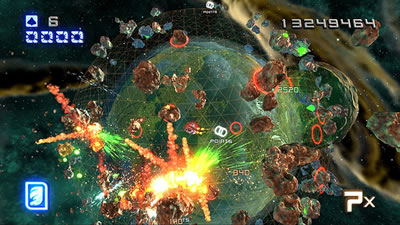 In order to avoid repetition, the game constantly adds enemies and dangers to each new planet phase. Asteroids are scattered all around all the time and represent the most present hazard, but you also come across different types of crawling creatures, bombs, mines, cannons, saucers, etc. In some phases you’ll notice small asteroids surrounded by decreasing number tags: destroy them all in sequence and get a large green bonus asteroid filled with power-ups. Swift use of weapons also becomes important in later stages because asteroid types get mixed – remember that each weapon is more recommended against the type that matches its name (rock, gold and ice). However, when in doubt I always went with the rock crusher (green), since I think it’s the most effective weapon against all asteroid types. 1UPs are rare items and always turn into shields after a while, so wait for it if you happen to be with a bare ship. Score extends are given with one, 5 and 10 million points, and for each successive 10 million points afterwards.

Even while mind-blowingly simple, Super Stardust HD manages to be incredibly intense and fun at the same time. It’s definitely one of the best twin stick shooters out there, and certainly one to get your toes dipped into if you’re not too familiar with the style. I could only point the generic electronic soundtrack as a letdown, but I can’t be sure if the sound effects are to blame for this impression. Explosions are so abundant it gets hard to pay attention to anything else. Another important aspect in the game is that, unless you're fighting a boss, there's no emphasis in bullet dodging. It's much more about crowd control.

Once beaten, the game loops in a harder difficulty level. In the options you can adjust the look of your ship (absolutely no influence in the actual game) and set the camera view to far (default) or near, but the difference between both is negligible in my opinion. The basic Super Stardust HD package also comes with an extra mode to play single planets/stages and a single-screen co-op option. Three add-on expansions offer split-screen and versus co-op possibilities, as well as several single player modes: endless (no end to enemy waves), survival (how long can you survive a series of indestructible enemies?), bomber (you can only attack with bombs), time attack (finish a planet with the lowest time possible) and impact (emphasis on boosting plus much higher multipliers).

Below is the best result of my sessions with the game on NORMAL. In this run I had my first death during the start of the 4th stage, finishing the credit in the first phase of stage 2-4. Unfortunately there's no way to save high scores locally, but the online leaderboards are especially cool for showing lots of unusual stats for the records displayed there, such as date/time, credit duration, etc. 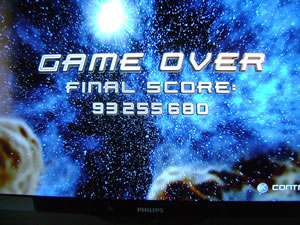