Ah, the 32X… The device that became a joke the instant it was released upon the then dying commercial era of the 16-bit system… What’s left for us, Sega fans, to enjoy from the 32X? Not much, given the reduced library of 41 titles… And what’s left for us, shmup fans, to enjoy from the 32X? Almost nothing, given the fact that the amount of shmups released for it can be counted with the fingers of one hand. Sad, isn’t it? It’s no surprise the 32X is shunned by players and collectors alike, but thankfully we 32X owners will always have Kolibri. The game represents half of the original shooters developed for the system and is considered by many as one of its highlights (the other original half is Zaxxon’s Motherbase 2000, arcade ports exist for After Burner and Space Harrier).

The best thing you can say about Kolibri is that it’s unique. Besides, it’s the best hummingbird-based shooter available for the 32X (sorry, I couldn’t resist that). Jokes aside, the game is indeed unique, and the beauty in its design is somewhat related to the classic Ecco The Dolphin. The company behind both games is the same, that’s why Kolibri shares many of the gameplay traits that made Ecco such a hit: excellence in graphics, atmospheric music and challenging puzzles are the most recognizable ones. I just wish at least one aspect had been left out, and that is the complete absence of a scoring system. That’s a disappointment in itself, but in Kolibri a scoring system wouldn’t help much anyway: most levels have no timeout and enemies are respawned all the time when you move back and forth. In the end, I guess having no scoring system is less harmful than having a broken one.

My 1CC run on Kolibri

Once upon a time, Earth was in peace and the hummingbirds happily sipped nectar from flowers, until onde day darkness fell across the land. One hummingbird was then chosen and given powers by a magic crystal, and there he went destroying bugs and creepy creatures in order to bring nature back to its glorious self. This part of the magic crystal endowing the bird with powers happens when you start the game, as soon as you find a specific flower and start sipping nectar from it (just get close and it will happen). That's when the game really begins: all stages are preceded by names and vary in atmosphere, length and difficulty. Some of them are of the exploring type, others scroll automatically. Scrolling levels are very straightforward, but exploring stages require you to perform some kind of task. Unfortunately these tasks aren't always clear and get progressively more complicated as the game unfolds (unlike Ecco, there are no text messages anywhere). Trial and error is the rule, encouraged by unlimited continues and a password system that allows players easy access to any stage reached.

Controls are easy: use button B to fire, button C to perform a quick dash and button A to trigger special attacks, whose function depends on your current situation. Tracking the number of lives is only possible when you get hit or when you take one life refill - that's when the number of lives left will briefly circle around you like faint shadows. Life refill items are released by flowers freed from parasite insects (early levels) or left behind randomly by regular enemies (later in the game). Note that lives are NOT refilled once you complete a stage, and life stock is also saved when you take note of passwords.

All weapons in the game have three power levels and are upgraded simply by sticking to the same weapon icon. The icons look like small bubbles and come in the following flavors: a pea shot (default), rings (small rings that expand forward), 3-way spread shot (rebounds off walls), exploding shot (explodes like fireworks), homing coconuts (evolve to a 3-way spread at maximum power), homing laser (thin long laser shot), homing peas (look like light blue petals) and homing thread (a "living" thread that chases after everything in sight). Note: I have named and listed these weapons from least to most useful ones, but it's easy to test the majority of them with the crystal that spits them out once you start playing. By the way, crystals are the normal source of weapons, but they're also released at random by flying enemies (actually it's very easy to switch weapons by mistake this way). Each weapon changes the color of the hummingbird and has its own characteristic sound, with upgrades that are signalled by an increase in either firing rate or spread capability. Finally, taking a hit downgrades the current weapon in one level.

There are also special items. The DNA fuels the shield that's activated by pressing button A and expands outward when the button is released. According to the manual, big transparent blobs are supposed to slow down the enemy, but what it actually does is increase your speed to uncontrollable heights. I avoid it at all costs. Much more useful are the several shield rings that protect you against one hit.  Yellow seeds are the key to destroy rock barriers and keep going in later stages, you just need to take them and then press A when you're close to the barrier. Some barriers are trickier to break and will require pushing a worm-like fuse bomb with one of your weapons so prepare, you'll need lots of patience. Checkpoint crystals appear in longer levels and save your progress (including powers/lives). They're irrelevant for 1CC attempts, but very useful while you're learning the game. 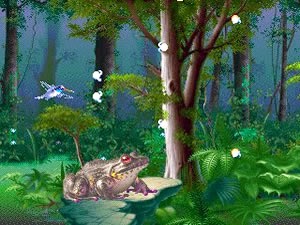 "Do you know what happens to a toad when it's struck by lightning?"

Much of the challenge in Kolibri comes from decyphering the mysteries in each stage and locating the necessary items to progress. However, the game is also riddled with cheap deaths and becomes a little nightmare if you're willing to see the end without ever losing all four lives. Beware if you're surprised by toads, chameleons or carnivorous plants, because once you're swallowed that cute hummingbird turns into dead meat. In rare occasions a quick dash can save you though, but no dash of any kind will be able to avoid those unpredictable huge droplets that also kill you in one blow. Dark Obstruction, one of the hardest stages (14th), has a moving bridge that kills you at mere contact, requiring a good amount of practice to be safely crossed (try to get there with a shield). Just for the record, there's no harm in touching any other part of the scenery.

Kolibri is original and fun, but it can also be infuriating when you get lost within the mazes of later stages. Gameplaywise there's something odd about the controls because the hummingbird doesn't really stand still when you stop moving. I'm not sure if the developer wanted to mimic the real bird's behavior with this, but it definitely requires getting used to. Other than that it's okay: most of the time crowd control is more important than dodging, especially when you consider that there are no main enemies apart from the final boss. Given the chokes of slowdown here and there, it's difficult to justify the fact that Kolibri is a 32X exclusive. Except for the exquisite use of color, I'd safely put it in the same technical prowess of Ecco or Bio-Hazard Battle, with which it shares a few similarities (one thing I only now noticed is that the game also belongs to the group of shooters that are insect-themed).

Two selections in the options screen must be mentioned. D-pad allows you to chose between holding or changing direction while firing (I prefer hold). Bird speed offers the alternatives of "normal" and "fast", which remains in effect for the whole game (I always leave it set to normal). I was able to clear the game on one credit with these settings and difficulty set to Normal.