I think Cotton 2 - Magical Night Dreams caught everybody by surprise when it appeared in the Japanese arcades. The first game had been out for more than five years, and the growing dominance of danmaku was remodeling everything people knew about arcade shmups. Original console titles Cotton 100% and Panorama Cotton were good in their own rights, but were no real sequel to Cotton. That said, Success (the company) was full of the best intentions when developing a real sequel, infusing the gameplay with a unique scoring system in order to make it sound fresh, faithful to its roots and at the same time engaging for those who valued something more than just blowing up stuff in a magical cute’em up setting.

So here’s to Cotton 2, my friends, a game that honestly took more time to draw me in than I think it would... First of all, I was virtually terrified when I learned it had fighting-style commands in the same vein of Ai Cho Aniki. By the time I had finally found the correct motivation to play it, at one moment I realized I hadn’t sworn so much at a shooter in ages. You see, this is one of those examples where a single mistake can easily ruin an excellent scoring performance, and screw-ups happen in the most awkward manner until you learn how to reduce the error margin down to a comfortable level. Of course you could just blast your way through the game, collecting colored crystals and casting magic spells like crazy... But what of the final score result? What about the rush?

We’re all here for the rush, aren’t we?

On the surface Cotton 2 isn’t much different from Cotton - Fantastic Night Dreams. Aside from the gorgeous graphical evolution, that little witch is still flying her broom in a neverending quest for those delicious willows. The first difference is that player 2 now controls a second character, Appli, who's followed around by a talking hat called Needle (he's to Appli what the fairy Silk is to Cotton). Both main characters have a single health bar instead of the traditional assortment of three lives. Basic gameplay is still related to crystals, which are released by destroying waves of enemies and color-cycled by being hit afterwards. With the exception of yellow, which gives you points and experience to upgrade firepower up to level 5, all other colors switch the element type that defines your shot while adding a magic spell: orange (fireballs), blue (ice shards), green (wave shots) and white/gray (thin laser beams, appear only after stage 5). Shooting is accomplished with button A and magic spells are cast with button C. A very brief invincibility window comes with each spell cast, and pretty much any element type is okay if you’re just playing for survival. Now here’s where things start to get intricate. Performing combinations of directionals + shot generates special attacks that “seal” regular enemies into a magic ball that can be grabbed with button B (grabbing can be done with pretty much anything, by the way). While holding the seal press A or B to throw it forward, hold B to put it in front of you. This seal is the most important aspect of scoring and can be used in two different ways: (1) defeat and seal further enemies by hitting them with the current seal, thus increasing the chain value for progressively higher rewards; (2) release the seal and hit it with regular shots in what’s called “pursuit” to increase a shot counter for more bonuses and generate a heart icon that refills health. The seal disappears/expires if it’s left untouched for too long or if it hits an enemy that’s too strong (bosses and midbosses), in which case a huge ball whose size varies according to the chain value will be created and flown towards your current position. Hint: you never need to worry about collecting yellow crystals when you play for score because then powering up happens automatically.

The catch with the seals is that they behave according to the current element/shot type. Wind and light seals tend to drift up, ice seals plummet heavily and fire seals fall slower. Therefore, optimal seal types are preferred in certain situations – pursuit of an ice seal in open space is extremely difficult, for example. Furthermore, response to shots during pursuits varies depending on the element type. Ice seals are also heavier to carry, and it's easy to notice how the caracter goes down faster while holding one. Having a favorite seal at the start may require some magic: Cotton always start with the fire element because that’s the first magic spell in stock, so if you want to quickly move to wind or ice you need to cast one or two magic spells. Appli, on the other hand, starts with ice. I play with Cotton and my favorite element is fire, so unless something goes really wrong in a credit I never use a single magic spell. Well, if I end up getting extra fire crystals I might use one against the knight boss of stage 6. He deserves it.

These are the commands you can use to start a seal:
I don't really like the last two commands listed, mainly because they're bound to create more than one seal and also because I can't perform them consistently. Nevertheless I think the controller response is decent, it just takes the same amount of practice as in any new fighting game. However, here’s an important note on the use of command shots: for some reason a chain started with little bombs (↑ ↑ A or ↓ ↓ A) isn’t always registered by the game. Enemies are regularly sealed but you don’t see the chain count grow and there’s no score increase either, the only thing you get is the bubble when the seal expires. All you can do to remedy that is let the “bad” seal expire and start a new one. What puzzled me for a long time is that at certain specific places bombs work 100% of the time, but alas! I learned to live with that.

There are a few more complicated commands than the ones listed above, such as the one that discards a magic element without firing it (because a spell always kills the seal) and the suicide (why, I wonder?). In any case, I only use command shots when I'm starting a chain or when a boss is in front of me. On top of all the beauty in the graphics of Cotton 2, bosses are definitely my favorite part of the design. To accommodate their awesomeness the screen has to zoom in or out slightly at times, and with the exception of the final witch boss the more you advance the more unpredictable and dangerous they get. And if you think that the emphasis on chaining and the low bullet count of the initial levels make the game a joyride without much dodging, well... Bosses will teach you a much deserved lesson. There's no magic, no chaining, no shot-commanding that suffices unless you get pretty good at reading patterns and moving out of bullet's way. And all bosses time out, so be quick if you want to take them down.


A 1CC run of Cotton 2 with cut scenes disabled

It doesn't matter whether you choose Cotton (1P) or Appli (2P) to play the game, they behave exactly the same way except for their initial spell elements. Due to the unique nature of the gameplay it takes time to confidently deal with seals and pursuits, but once it happens Cotton 2 acquires a whole new dimension. By then you'll be giving much more thought to positioning (it affects enemy spawning), as well as rebounding seals off walls, grabbing/throwing stuff to clear the way and reacting to the occasional odd response of the built-in physics. Every now and then the seal will drift farther than usual, ricochet towards a different direction or connect to a series of enemies that are just entering the screen. During my first weeks I tried to refrain from shooting to add all enemies to the chain, often getting hit and losing a large chunk of health. In the end, no matter how you look at it, controlling the environment is essential to succeed both for survival and for scoring, especially when you consider that the game has rank. The better you play and the higher you score the more aggressive the game gets. Get hit and score peanuts to keep it tamer (not by a large stretch though).

When a boss is defeated you’re given the chance to recover some health by collecting the falling cups during TEA TIME. If you manage to avoid all cups a secret higher bonus will replace the regular bonus at the cost of no health refill. Then you’re awarded extra points for the stock of spells, cups collected (or the secret bonus) and the sum of seal/pursuit results for the stage. TEA TIME is the only part of the game where I detach my sidekick from the broom (Silk or Needle) in order to move a little bit faster. The command for that is → → ← B (there's also a speed increase triggered by holding A, but that's an unreliable resource because the character moves in bursts). Besides TEA TIME the only other way to recover health is by engaging in pursuits during the levels, but that's a bit more complicated. However, it's easier to accomplish pursuit recoveries when you have a wall where you can lean the seal and shoot it away. One spot where I'll certainly do that is on the 5th stage, right after the diagonal shaft descent prior to the mid-boss. The breather in enemy activity allows you to pull the seal against the upper corner and blast away to harvest a tender heart.

It is true that the gameplay in Cotton 2 isn’t for all tastes, unlike the outstanding graphics and audio. There’s a dark layer all over the game, but it never gets too grim or sinister. Even the creepiest things (zombie flocks, ghosts, fiends) look cute. Some of the music is lifted from the soundtrack of the previous chapter, and unless you use a RAM expansion cartridge you won’t be able to hear voices and intermission dialogues (which is actually a blessing for many people, those exaggerated characters can get annoying with time). Not only is the Saturn port a perfect rendition of the arcade original, but it also comes with an exclusive extra mode with rearranged backgrounds and enemies. Both modes are selected in the options menu, which is beefed up with extra tweaks when you beat the game in successive difficulty settings. If you want to take the shortcut and unlock everything – including a very handy Practice mode – just place the cursor over "Option", press and hold X, Y and Z and then press and hold A, B and C. Bingo! Special attention should be given to the pad-XYZ option: it allows the player to use autofire or map command shots to extra buttons. I didn’t use it, but I bet some people would love to have it from the get go.

The only downside here? The Sega Saturn port came out only in Japan, just like the pseudo-sequel Cotton Boomerang, which is supposed to be just as cool, albeit more hectic. For now I can say that pursuits + seals = lots of fun, you just need to be a little patient with Cotton 2. The arcade mode 1CC score below was achieved on Normal at full defaults (no pad-XYZ). A cool feature of the disc is that you can see a breakdown per stage of your performance by checking it in the Ranking section. 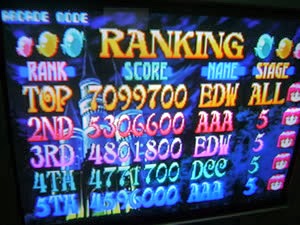