The Hunt for Red October (NES)

Right before the Cold War ended, a Russian typhoon class nuclear submarine entitled Red October deviated from its exercise course. It headed towards the USA shore, much to the concern of both North American and Russian authorities. What's the real intention of Red October's captain Marko Ramius? The NES game adaptation for The Hunt for Red October uses this same premise, and luckily for us shmuppers it puts the player in Ramius's shoes. Had Jack Ryan (the supposed hero of the movie) been cast as hero in the game I certainly wouldn't be writing about it here. Besides, out of games based off the James Bond franchise, where else would you be able to play as Sir Sean Connery himself, not only imagining him inside the submarine but also controlling an avatar drawn from his likeness?

Okay, the above statement may not be that exciting for some people, given the fact that The Hunt for Red October on the NES is quite a demanding, sometimes punishing experience. It's a shooter very much based on environmental hazards instead of dodging, and on top of that you have limited ammo, as well as many random factors working against you. The pace is predominantly slow and the atmosphere is often claustrophobic, with only a single haunting theme repeated over six levels and replaced by another tense BGM as you control captain Ramius himself in the final platforming stage.

There's a lot of story to this game, starting from the brief intro sequence that describes the same preamble shown in the movie. In between stages the likenesses of Richard Jordan and Joss Ackland interact as the US premier and the Russian embassador, respectively. Does snubbing Alec Baldwin seem weird now, considering he was a hotshot back then? Wait, he wasn't? Anyway, of course the storyline of the game doesn't match the movie, but who cares? We shmuppers prefer to blow up stuff, don't we? 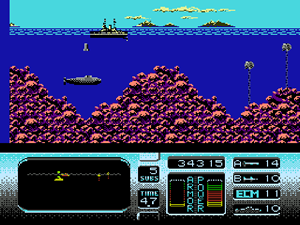 I'm Sean Connery and I command the Red October

Getting comfortable with the large HUD is extremely important in Red October. To the left you have the radar, which shows both the enemies in the vicinity and the nearby items. Next to it is a display for life stock and time left (there's no time limit to complete the level, but any time remaining after beating the boss is converted in bonus points). Next is the score counter and the gauges for armor and power. Armor = health, while power decreases slowly as the sub navigates underwater. Power is needed to fuel the sub's special abilities, and to recover it you need to go to the surface or to take the icon with the radioactive sign (P). To the far right is the ammo display for weapons and special abilitites. First is the stock for torpedoes (horizontal, fired with button A), below it is the stock for missiles (vertical, fired with button B), then the stock for ECM (electronic counter-measure, nulifies enemy fire, activated with A+B) and finally the display of spare time for the caterpillar drive, which allows the submarine to evade enemy sonar systems (activated and deactivated with SELECT).

Ammo for torpedoes and missiles is increased and upgraded by taking the appropriate icons. There are three firepower levels for both: A is the default normal range capability, B improves the weapon range and C adds homing ability. If the stock in a certain upgrade level is depleted you're automatically downgraded to the lower level. The only weapon you can still use if you run out of ammo is the torpedo, although at a reduced firing rate. Using up all others will leave the player without them, that's why you always need to have a sharp eye on the radar. All icons are shown as letters there: torpedo (T), missile (M), power recovery (P, radioactive sign), armor recovery (R, green wrench), 10 extra EMCs (E) and 10 more seconds for the caterpillar drive (C). There are also extra lives to be taken, in the form of parachuting men delivered at surface level. They show up as hearts on the radar and must be taken quickly, before they reach the water.

While there's nothing outstanding about the graphics they at least get the job done, and the dark tones help set the mood for a game marked by constant pressure. Getting used to the controls isn't enough though, you need to be prepared for several random attacks from enemy subs and bombs being dropped by overhead jets. Dealing with falling rocks/shards, moving barriers, intelligent turrets, sniping subs and quick-moving ships is possible with practice, but bosses are particularly tricky. The best advice to beat them is to take advantage of the bult-in autofire and to get aggressive on their weak spots. Sneak into the gap of the 2nd boss and pound away with torpedoes, destroy the ships of the 3rd and 6th stages from right to left at close range with missiles. My nemesis was the 5th boss: defeating him requires you to get inside his dome, find a spot where the approaching subs won't hit you much and pray. Yes, pray that the enemies won't hit you to death.

Of course the "praying" kind of challenge is prone to driving people away from the game. However, it's not that bad once you get better and learn exactly where to get all the extra lives. Besides, on every boss checkpoint you're always given the necessary firepower to try again. And here's a little note on difficulty: when I practiced the game on Nestopia I noticed there are two versions of it. The hardest ROM is the European one, with more obstacles and more random enemies during boss fights. What's weird is that it plays just like my US/NTSC cartridge! It's clear that boss fights are less troublesome in the easy version, so I was thrilled to be playing the harder variation of the game.

Speeding through the first level
(courtesy of YouTube user BoredGamer)

Once you beat six submarine stages it's time to help Ramius in a last mission inside the Red October. It's a rather simple platforming task, with five consecutive rooms where you need to defuse a series of bombs planted by dirty insurgents. Jump with A, shoot in eight directions with B and go from a blinking bomb to the next before the clock on the left of the HUD completes a full round (for each bomb). To defuse a blinking bomb just stand in front of it (funny note: it looks like Mr. Connery is peeing!). If you take too long and one of the bombs explodes you die and get respawned at the entrance of the current room. Dying can also happen if you take too much damage, so watch the health meter on the right side of the HUD. Falling from more than two stories knocks Ramius down briefly and sucks away more health, so don’t count on it to take corners. Above all, be careful not to run out of ammo: once the sixth shot is fired it takes a few seconds for the gun to reload, and if you’re surrounded by enemies it’s most certain they will shoot you to death. That’s why it’s always good thinking to (1) clear all baddies on-screen before moving to the next bomb if you have some spare time and (2) empty the gun every time you’re disabling a bomb. Remember that the clock freezes when you’re peeing on them. :)

Regardless of how you stand before entering the sabotage area in the final level, you’ll always be given 5 lives/attempts to get through all rooms. Jumping on the right platforms and taking some damage is necessary to reach some of the bombs, but in general this final action phase is easier than navigating the waters inside the submarine. The game is still slow and the graphics don’t get any shinier though.

The NES version of The Hunt for Red October is tough, yet manageable with a little patience. There are no continues whatsoever, but a series of in-game codes can be used to alter many gameplay aspects if you so wish (a quick online search will bring them up). If you still feel the game is too hard, well... Submarine Attack on the Master System can certainly provide a much lighter underwater shooting romp.

And below is my 1CC high score for this one. Final note: besides the NES, the Super Nintendo and the Game Boy also received their own games based on the same movie. 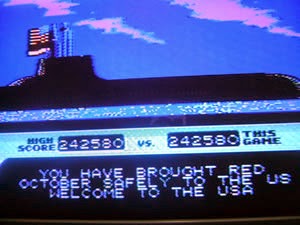