What a lovely game this is! Colorful, cheerful and deliciously nonsensical! Sure, I guessed part of this when I tested it a few years ago and came out thinking of Hana Tahka Daka!? as a cute’em up starring a giant flying chicken. In fact, the avatar in the game is a “tengu”: a large creature from the Japanese folklore depicted with human or avian characteristics, often represented in monstrous fashion and above all endowed with a long red nose. So there you have it, I wasn’t completely wrong in my association, but if “flying chicken” sounds too mundane we can always stick to “long-nosed goblin”, which is actually how this relatively unknown game released only in Japan got to be known amongst those who’ve been exposed to it in Western circles.

Even though the tengu of the myth weren’t really benevolent entities, in Hana Tahka Daka!? a fox in distress calls for a tengu’s help in order to get his girlfriend and a stolen sacred scroll back from an evil raccoon. Looking at it this way it’s impossible not to see similarities between this game and Keio Flying Squadron on the Sega CD, which also has an evil raccoon as main villain and even shares much of the same gameplay vibe. Hana, however, has more Japanese culture packed in its design and comes with a softer challenge level. Add the excellent soundtrack to the mix and the result is a sweet shooter that delivers on almost all aspects that matter for a console like the PC Engine.

And that’s not all. More experienced players will recognize lots of things in the influence stew cooked by a very inspired Taito. Konami is the obvious first one (Parodius), but you can also see clear echoes of Irem (R-Type), Namco (Ordyne), Sega (Sonic the Hedgehog) and even pop material from Hollywood. Ever heard of Freddy or Jason? 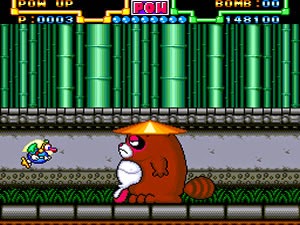 Controlling the long nosed goblin is simple and requires two buttons only. Main shot is fired with button II, special bomb weapon with button I. Hold down main shot and release it after a brief while for a powerful charge blast (check the charge gauge on top). There’s an impressive array of items to be taken from little gift boxes, starting with the meat-on-a-bone that increases the size of the goblin and works as an upgrade for power and health. This means that each of the three goblin sizes has a specific effect on how you’re able to play the game. A large goblin is the most powerful one. Getting hit sends it down to its medium size and removes the ability to use charge enhancers (see below). Another hit shrinks the goblin to its smallest form, downgrading its power to the lowest level and stripping it from all active items or special weapons. Any further hit means death and return to a previous checkpoint where you’ll be respawned with a medium-sized goblin.

Don’t even bother activating turbo fire on Hana Tahka Daka!?, even when you have three options and tapping the button seems to provide better firepower. The game never incurs in wrist pain anyway, and fortunately the charge-based mechanics around which it’s built work quite well, especially when you have one of the charge shot enhancers. Not only does the goblin possess greater destructive charging power, but whenever in this condition a half-full charge blast results in the unenhanced full charge blast. Confusing? I hope not! The result is that it’s always better to use the charge shot with a large goblin. Note: watch how a just-uncovered charge enhancer turns into gold if you get hit before taking it (actually any incoming item that’s somehow useless is turned into gold).

Besides six stages of rather decent length there are also six side quests to be completed. In each level there’s a hidden raccoon that gives access to a parallel room that scrolls in a closed loop, and once inside the objective is to find a special piece of the stolen scroll. That’s no bonus stage at all, since you can still die there and lose all your lives without ever coming out to the regular stage. Secret pieces of the scroll add 10.000 points as a bonus once you beat each boss, but failing to find them doesn’t really affect the rest of the game apart from the ending: there will be no clear view of the stills shown in the final sequence and you'll be denied the end credits (missing pieces appear with a darker color as the goblin puts them in place after beating a boss).

Easygoing is pretty much the definition of how Hana Tahka Dahka!? plays. After all, you’re allowed to touch walls and destroy nearly all enemy bullets. The large hitbox of the big-sized goblin doesn't incur in more difficult maneuvering at all, just beware of getting crushed by the scenery and watch out for cheap hazards in the form of traps, vacuum cleaning witches and hungry whales (getting the goodies inside the traps is possible if you do it very quickly, but overall it’s just not worth the risk). Levels range from mountain landscapes to castles with splitting caverns, skies, railroads, ocean and ice in-between. Secret areas offer other themes such as an upside-down section, a trippy clock-laden cylinder, an ant-infested candy land, a cemetery and an outer space scramble with whacked controls/inertia. Everything oozes with graphical detail, color and sheer creativity. And even though it’s really subtle there’s also some parallax going on almost all of the time.

Normally extra lives are gained with scoring (at 50K, 100K, 200K, 400K points, etc.), but look out for a special item shaped as a pink dinosaur in stage 4. That thing granted me the ludicrous amount of 30 extra lives! How’s that for some extra chances to beat the game? Just remember to suicide right afterwards and take the upper path in order to get the hidden scroll piece. Unfortunately playing the game for score is useless because you can amass any score you want in any secret area if you just refrain from finding the scroll piece. The continue screen is confusing (the active option is the yellow one) and since the game isn’t too long I think the password feature wasn’t really necessary. This password appears on the GAME OVER message and can be entered in the left option at the start screen (middle one starts the game; to the right is difficulty selection and sound test).

Since Hana Tahka Daka!? has no high score buffering of any kind, once again I had to come up with something really clumsy to get the picture below. I beat the game on Normal and collected all six hidden pieces of the scroll, with no milking whatsoever. 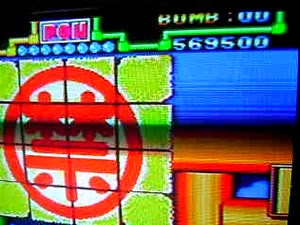