Obscure games such as Two-Tenkaku tend to give me a feeling of exclusivity. Because, you know, few people own it, even fewer played it and out of shmup circles almost no one has ever heard about it. Of course that’s the collector side of me thinking because, as a shmup, Two-Tenkaku doesn’t do anything out of the ordinary. The only real addition to the generic format of linear stages with mid-boss and boss is just a handful of those grainy FMV sequences that were so typical during the Playstation golden era. By today’s standards they’re pretty ugly, but in this case the animation work is aggravated by some of the most annoying Japanese voices I have ever heard. The only feeling I got from them was desperation. And the desire to press START to cut to the chase.

In the midst of the lack of innovation I noticed at least a few clear influences from famous titles released by other developers, such as Video System and Seibu Kaihatsu. Considering that DonPachi came out at the arcades in the same year, Two-Tenkaku might even dispute the honor of showing the first instance of the lava-stream laser that became a trademark for Cave's most famous shmup series. Sure, here it's not nearly as gameplay-driven, but it's there and it's probably the nicest graphical touch in the weapons department. That's the reason why I chose to play with the Shurinpper ship.

Speaking of ships, you must choose between three of them: Craber fires a green wave with some spread shots on the side, Kuidaoregger has a wide straight shot with options that move in fixed formation around it (with a little delay) and Shurinpper offers a narrow straight shot with the abovementioned DDP laser as bonus. All of them fly at the same speed, with basic controls consisting of shot, rapid and bomb. These can be mapped as you wish on the face buttons of the controller, just remember that rapid isn't really the equivalent to rapid fire or autofire. What it does is fire a single stream of bullets for a little longer than a second, thus requiring the player to tap it slowly in order to get a continous firing rate.


Two-Tenkaku: intro and first stage with the Shurinpper
(courtesy of YouTube user ghegs)

Most of the items are obtained by destroying one of the green carriers. They consist of power-ups (P), straight missiles (M), homing missiles (H), Susanoo bomb (S), Two-tenkaku bomb (T), 500 points (small coin), 1.000 points (large coin) and extra life (1UP). Both the primary weapon and missiles are upgraded in three steps, and in the case of missiles you must stick to the same type in order to increase their power (there's no timely switch as in Raiden, so you have to dodge any unwanted item until it leaves the screen). Regarding upgrades, the Shurinpper is benefited by the fact that once you take the second power-up the continuous laser beam can be fired with either shot or rapid, so no tapping is ever required in this condition.

People who are familiar with Japanese culture are bound to realize that Two-Tenkaku's main stage themes, as depicted by the short animation that precedes them, are based on well-known places from the city of Osaka. Two-Tenkaku itself is the name of a landmark tower originally patterned after the Eiffel Tower, but later reshaped as shown in the game. Naturally the levels themselves are only vaguely related to these thematic places. Conventional landscapes like city, ocean and factory are home to an eclectic yet mundane enemy gallery that imposes a somewhat uneven difficulty distribution, while several details show that the developers seem to have played a lot of Sonic Wings (jets that fly back and forth vertically and weird spinning bosses, for example).

Unfortunately Two-Tenkaku has no sign of the sting that permeates a game like Sonic Wings. It's got its share of traits that require attention, such as mid-sized planes firing three-way shots in the lower half of the screen or the disposition almost all bosses have to spit cheap blasts from their cores once their sides are destroyed. However, none of these should be enough to keep a medium-skilled player from achieving the 1CC after a few play sessions. Extra bombs abound, and since they offer instant invulnerability they're particularly useful as panic relief (S type is more powerful). The order in which extra bombs appear (S/T) is random, you can have a maximum of six bombs in stock and any extra bomb taken after that will result in a bonus of 2.000 points. 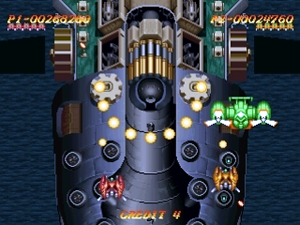 The 2.000 point bonus also applies to any other surplus item collected once its function is maxed out - namely power-ups and missiles. While this constitutes one of the aspects that defines the game's scoring system, most of the extra points to be had are achieved by destroying boss parts. One example is the first mid-boss: in a well-played credit aiming at the center leads to a faster kill with less than 100.000 points, but obliterating its wings completely before targeting its core results in more than 100.000 points plus the first score extend. Further extends are awarded with 500.000 and one million points.

Despite the lesser scoring opportunities provided by the Shurinpper ship due to its reduced spread power, I still decided to clear the game with it simply because I was sold on that blue laser. Pause the game and behold how it's actually formed by a series of smaller successive energy streams. Since neither graphics and music are remarkable by any means, that's probably what I'll remember most about Two-Tenkaku. The CIB game package comes with a cryptic poster full of strange symbols whose meaning I can't even begin to fathom. Anyone care to enlighten me?

At first I thought there was some kind of bug with the manual load/save functionality, but then I found out that you need to press right or left to toggle from "load" to "save" in the options menu. And here's my 1LC high score, playing on Normal with the Shurinpper: 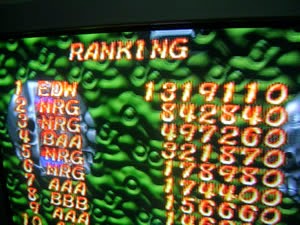