Once upon a time there was a Japanese 32-bit computer known as FM Towns. It had a console variation named FM Towns Marty. Despite the system’s impending obscurity and swift descent into failure a few unique and exclusive titles were developed for it, such as the first Rayxanber. It offered a different take on the methodical school cemented by R-Type, even though it lacked any of the flair one naturally expects from a 32-bit game. Seeing that the FM Towns wasn’t really going anywhere and Data West still had more of the same under their belt, the company decided to continue the series in a different system, granting the PC Engine CD add-on with not only one, but two exclusive sequels.

I should stress the above part where you read “more of the same”. There are absolutely no functional differences between Rayxanber II and the first game. You still have the same three single upgrades and you still win an extra life at every 50.000 points, fighting the same intergalactic organic-like enemy forces while aided by unlimited continues. Therefore if you’ve ever played the first one you’ll know exactly how to approach the second. However, this doesn’t mean Rayxanber II treads the same path of its predecessor in other gameplay aspects such as pacing and challenge. Most of the time everything moves much faster, whereas difficulty gets elusively heightened by a couple of infuriating design choices. And this in a shooter with unusually low bullet count, where the easier stages are too easy and the harder ones are too hard.

Working out the mechanics of the game takes little time. Button II fires your weapon, be it the pea shot of the default ship or the single-level enhanced weapon acquired by taking the colored power-ups released by a carrier that looks like a dark shadow of your own craft. The firing direction of the upgrade is defined by the moving dial inside the icon, thus demanding a little bit of timing from the player. Blue corresponds to a pattern of thin shards, orange is the flame gun and green activates a lightning bolt. By holding and releasing the firing button you trigger a charge shot that varies according to the current weapon: 8-way blast (blue), flame shots with homing ability (orange) and a quick circling attack that surrounds the ship (green). 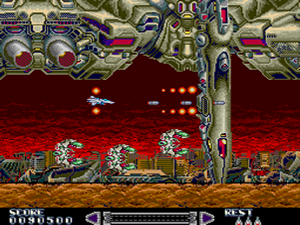 The other button in the controller is responsible for the dash maneuver. It propels the ship towards its moving direction, providing a very much needed evasion capability. You can’t dash continuously though, because then the engine overheats. The lower bar in the HUD serves as a meter both for charging and overheating, and whenever it’s in the red zone you have to wait for the engines to cool down. Dashing three times in a row is enough to cause overheating, but from my experience a triple dash is rarely needed.

Rayxanber II throws you in the action right away, with little gusto for any warming-up preamble. A series of drones and space stations cross the screen as multiple graphical layers scroll by really fast. What’s instantly clear is that in order to play decently you need some sort of autofire, and since the game has none you should definitely get a turbo controller. The need for autofire is also related to the fact that all weapons were made less powerful this time around. Charge attacks were also affected by the power downgrade, but that doesn’t mean they’re all useless. The effectiveness of the homing flame was severely toned down, but the green charge is still capable of damaging enemies behind walls in spite of its reduced range.

Further stages vary in theme quite nicely, from an open area over the sea to the barrage of walls and blocks of the last level. In the third stage you must weave below the paws of a gigantic insect-like spaceship. Huge creatures and deadly eyes protruding from walls populate the fifth level, but to get there you must make way through one of the most unsettling stages I have ever seen in any horizontal shooter. It’s like a nightmare turned into a shmup: a mud (or ice) mesh covers everything and impairs your firepower, rocks bounce around freely, huge snakes appear out of nowhere and kamikaze enemies home on you from all sides. What makes this stage extremely unpredictable is the fact that the trajectory of the bouncing rocks is affected by the movement of your own ship and your enemy’s. Memorization can only get you to a certain point, and after that it’s all about hazard anticipation and wise dashing decisions amid hiccups of slowdown (note about the slowdown in stage 4: it totally messed with my controller, and halfway into the level I had to turn turbo off to actually be able to fire). This is the place where most credits end in Rayxanber II… a stage without a single bullet fired at you, and that pretty much includes the boss.

Bosses are, in fact and literally speaking, in a league of their own. When the stage ends the screen fades and you enter the boss chamber. Every boss has a weak point with limited access, and each one demands a very particular and sometimes tricky approach to be defeated. Except for the third boss, if you die in their chamber you’ll need to restart the fight with a bare ship and no upgrades at all. Bosses are at least consistent in how progressively difficult they get, unlike the levels themselves, which are heavily unbalanced. The last stage, for example, is almost as maddening as the fourth, and it’s pretty common to get shot in the face by a turret you have just destroyed. Lots of memorizing and planning ahead might eventually iron out random deaths, but there will always be a strong rage-inducing nature to that section. And of course, the same applies to the fourth stage.

I believe developing Rayxanber II for the PC Engine CD was a wise decision from Data West, at least in Japan. It’s graphically and musically on par with Rayxanber on the FM Towns, and a worthy successor in its own right. Remixed with faster tempo and reused in the sequel, the music for the first stage works remarkably well as starting theme in a soundtrack that once again evolves into gloomier compositions later on. Everything else is pretty tight and straightforward, stages fading and succeeding each other in a hellish checkpoint-based experience – stages 3 and 6 have only one checkpoint, die anywhere there and restart from the beginning. Is it hard? Hell yes. Is it fun? I guess so. But it surely feels more fun when you finally manage to 1CC it. Tricky question: is rewarding equal to fun?

As it stands, it seems that every single resource in Rayxanber II went into the game itself, after all it’s got no options, no attract mode and no high score buffering, halting at the copyright screen in the end. Well, if you consider the company hired Homer Simpson to provide a voice snippet at the start screen then that’s where some of the investment might have gone to.

Considering those orbs can probably be exploited forever on the second boss we could say the scoring system in this game is unfortunately broken, so this is yet another case where the journey is what matters most. And here’s my final 1CC score (as you can see in the video above, I died in several places from stages 4 to 6). 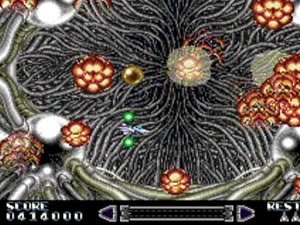