The Rayxanber series was never popular back in the 90s. I guess it was never supposed to be since the first game came out on an obscure system and the second one scared the shit out of people who had trouble coping with its high difficulty. Both games essentially followed the same rulebook, down to the last detail of the gameplay, but for the third chapter developer Data West decided to implement something different. The result is that while still remaining faithful to the style originated on the FM Towns, Rayxanber III changes the formula a little bit and by doing so delivers an experience that's much more approachable challengewise. The R-Type school of horizontal shooting still remains as the main source of inspiration though.

War rages on against the organic armada of the Zoul empire. The player must board the cockpit of one of the resistance's spaceships, in a final and desperate attempt to save the universe. Your weapons arsenal is fired with button II, whereas button I triggers the series' trademark dash move. Watch as the upper bar in the HUD indicates the energy used while dashing, if it enters the red area it means the engine has overheated and you must wait a little to use the dash again. Not that it matters much anyway, but dashing is the only unaltered aspect of the classic Rayxanber gameplay and just like before successive dashing is rarely needed.

The adventure starts with the departure from the mothership, and as you fly around to defend it you have a nice opportunity to get to know the new weapons. 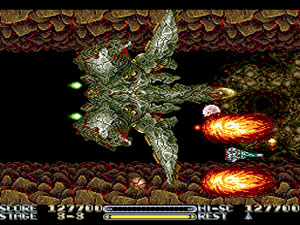 When the carrier ship is destroyed it releases a weapon item that has a moving dial inside. This dial affects the way the weapon behaves, so according to its orientation the ship will fire in a particular direction/way. Green activates a bubble shot that's very powerful despite its slow speed, yellow corresponds to a continuous series of laser shots and red generates a couple of thick flame bursts above and below the ship. A little experimentation is certainly needed to get a grasp of which weapon works best in every situation, especially on boss fights, but the important thing to have in mind is that there isn't really any useless choice. Of course the reach of the red flame is the only glaring limitation when compared to the other weapons.

The greatest departure from the gameplay in the previous chapters is in the charge shot. Instead of being associated with the current weapon, in Rayxanber III it's automatically charged as you keep the firing button pressed even if you're only equipped with the default pea shot. When the lower charge bar gets yellow you're ready to unleash it, so just let go of the firing button and watch as a pair of missiles gets shot forward. Press the button again and these missiles will explode in a batch of homing missiles that will fetch everything that takes damage anywhere on the screen, even behind most walls. Granted, in the heat of the battle 99% of the time I was just tapping the shot button to release the homing missiles and recharge them.

When you take out the need to stop shooting to charge a stronger attack, the gameplay certainly becomes more dynamic. I consider this to be a clear evolution from the previous games in the series. On the other hand, this improvement is not followed by a proportional adjustment in difficulty. If it weren't for the overall theme and gameplay, you couldn't really tell Rayxanber III is part of the same series that has such demading horis as Rayxanber and Rayxanber II. It is a lot easier than the others and in that regard it's an inevitable disappointment (or not). You come to it expecting some sort of memorizing hurdle and it has none, which of course is excellent news for those who crave lighter challenges.

On graphical and musical merits, I also think Rayxanber III isn't on par with the rest of the series. There are no voices for weapons anymore, and in my opinion the music isn't bad but it doesn't engage the same way it did before. Backgrounds are lacking from beginning to end, with black voids everywhere and no additional parallax layers whatsoever. There's a lot of detail in the way caves and walls are conveyed but that's about it, and the abundance of caverns/rocks + too little environment or outer space gives the game a cramped feeling. I might be wrong here, but I wouldn't be surprised to know there was some rush in the publishing process. The absolute lack of polish on the fight against the last boss is an example, something that a close friend compared to the boss fights from Atomic Robo-Kid (no grudge against Robo-Kid, but the boss fights there are an overall design choice instead of a weird, unexpected final showdown).

The worst thing about the last boss is that it allows infinite milking. Destroying all of its turrets and innards nets you more than 50.000 points, which is the amount you need to get an extra life. Talk about a broken scoring system! Milking in other areas of the game is also possible but more time consuming, such as when fighting the gigantic crawling monster at the beginning of stage 3. Speaking of monsters, the second boss is an obvious reference to the big marine creatures from Darius. And following with the trend in the series, there's also a cryptic boss here that won't give in just by hopelessly shooting at its core.

Rayxanber III is quick and easy, but I won't deny it's got decent fun factor. If you think the standard difficulty is already too tame, you can always try the maniac option. The main differences are in enemies being more resilient, coming in slightly higher numbers and behaving just a little more aggressively. All other gameplay aspects stay the same. Regardless of how you play the game, the ending gives a very nice closure to the series by showing stills of backgrounds from all stages in Rayxanber and Rayxanber II as you listen to the awesome theme for the very first level of the original chapter.

I just wanted to score more than half a million points, so here's my final 1CC result on Standard/Normal difficulty: 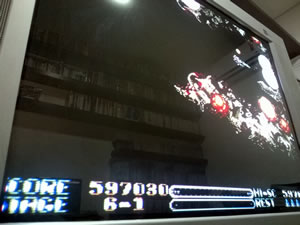