A vertical shooter where you pilot a motorcycle equipped with side cannons? This is Thundercade, originally released for the arcades by SETA and later ported to the NES. The idea is terrific and in my mind brings back fond memories of movies like Indiana Jones and the Last Crusade. Overall Thundercade shares a lot of the same gameplay of Gun.Smoke, even though it lacks the execution standards of the NES port. Unfortunately the first impression you get from this 8-bit adaptation is the complete opposite of exciting. The extremely downgraded visuals, the slow pace and the seemingly high difficulty are bound to repel even the most enthusiastic Nintendo or shmup fan from giving the game a chance.

But alas! Persistence and patience were highly regarded gamer traits back in the 80s, so why should it be any different today? It took me a little while to see beyond the stinky outer layer of Thundercade and once again adapt to the act of mashing buttons on the NES controller (because the game lacks autofire and somehow manages to screw with the turbo functions I had at hand). Eventually I figured it out... The thing is that this game is more deceiving than your average NES shooter, and unless you go out in a rampage of destruction you won’t get very far in it. So kill. Destroy. Shatter. Bring down the house!

Well, bringing down the house is quite hard to pull off at first, unless you make use of the bombs deployed with button A. Regular shots fired with button B are weak and disappear once you acquire any of the sidecars that shoot upwards. Sidecars can also shoot left or right and are found lying around or by destroying parts of the scenery. They comprise single and dual cannons in three power levels: green ones have shorter reach, red ones can reach farther and white ones provide a lot more offensive power. The side in which the sidecar will be attached depends on how you approach it: if you want it to be on the left touch it from the right, and vice-versa. The problem with the sidecars is that they’re gone once they get hit, so the player needs to keep the complete set of motorcycle + sidecars away from harm in order to preserve weapons. 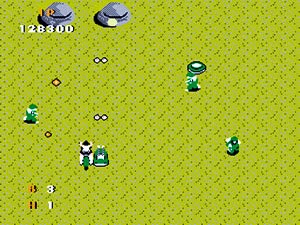 Leading to the base

Besides constantly trying to preserve a huge hitbox, sometimes you also need to deal with jumps that happen when you transition from one kind of surface to another. This is mostly present in stage 2, where touching any border of a different “height” sends the motorcycle into the air with a characteristic sound. While airborne you’re invincible, but the aimed enemy shots + terribly slow motorcycle often lead to a horrible death when you land. And after landing you might also find yourself confined to a smaller area whose boundaries are often uncertain, which then leads to more confusion and more deaths. Beware of cliffs and thresholds!

Throughout all four stages of Thundercade there’s actually a little variety on enemies and none on music (the same tune plays over and over). Graphical themes are city, base, woodlands and fortress, all of them with decent length which avoids people saying the game is too short. At the end of the second and third levels you face a large gunship that fires lots of 3-way shots: kill it fast enough so that you get the B item and enter a brief bonus stage. The objective there is to catch the falling parachutes by moving left or right. A parachute adds 4 missiles to your regular firepower, but sometimes they change into other more useful items such as V (vulcan cannon), 1UP (extra life) or an extra bomb. These last items can also be found in the stages themselves just like sidecars, but with the exception of bombs they’re always hidden inside static obstacles.

Turning the odds on your favor in this game requires a few attitudes most people take for granted. Sticking to what you normally get and being savvy on bombs will most likely make Thundercade a very difficult game. Soldiers and tanks are no big deal, but you should also be able to crush buildings, gas drums, trucks, trees, cactuses, helicopters, gates, dirt hills, etc. The first tip I can give is to shoot every single static obstacle, even the largest ones. Some of them will not fall, but inside those that crumble chances are you’ll find useful items such as the vulcan cannon (V). This is the most powerful weapon in the game but also the easiest one to lose, since it adds two sidecars at once and disappears if any of them takes a hit. It fires a two-way shot whose only weakness is the absence of any attack option at the front of the motorcycle, however this becomes irrelevant when you notice that the vulcan cannon can tear everything apart with ease. Just don't get close to any sidecar item or you'll end up replacing it. By the end of the game the vulcan cannon isn’t nowhere to be found, but the white sidecars are powerful enough to keep you going.

The second hint that helps to succeed in Thundercade is to not hold from bombing whenever you feel threatened. This may sound like dumb advice, but some enemies tend to be unpredictably erratic - those helicopters are particularly annoying, and if you can’t find a position to quickly kill them it’s often safer to bomb. Each life comes with three bombs, so it’s always better to lose a bomb than a life (or your precious weapons) on the face of an impending death. By holding the bomb button for a little while after deploying it you can also make the two forward blasts develop a staggering pattern, thus covering a wider area on the screen. Very useful on both gunship bosses. Speaking of which, no boss is to be found on the third level, while the last boss is just a handful of snipers trying to shoot you down from the manholes of a nuclear power plant.

Once you complete a level you get a glimpse of your progress, along with performance stats on shots fired, number of hits and hit-miss ratio. Since the best way to not die is to be proactive and keep firing all the time, those performance indicators are there just for show. The few continues available at least allow for some practice, even if they throw you back to the start of the level. There is no randomness at all to the game itself, so memorizing the location of hidden items is half the battle for the 1CC. Besides, it’s actually the only way to squeeze a little fun out of the game other than playing it with a friend in co-op.

Upon completion Thundercade halts at the ending screen and you need to reset in order to check the high score. Here’s mine, playing without autofire: 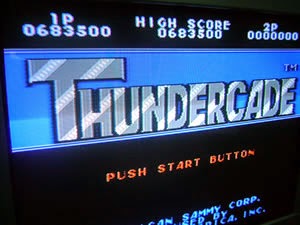