Marketing can be everything sometimes. I can almost feel the excitement a kid would experience by getting a hold of Thunderbirds on the NES. The box art and the text on the back of the box are pretty much a work of genius, regardless of how much a fan of the TV series anyone was (I wasn’t). I never got to play the game back then, but a few days ago a bad feeling was already in the air as soon as I turned on the console and saw the name of Pack-in Video in the copyright screen. That definitely wasn’t a good sign given some of my past experiences with the company, such as Deep Blue for the PC Engine.

Thunderbirds, the TV show, is a futuristic science-fiction series made with puppets that firstly aired during the 60s. Called supermarionation by its creators, the technique used by the show must have been quite charming for those who lived through that era, but the same can’t be said for younger kids back in the 90s – or for any average adult these days. As a video game adaptation, this particular Thunderbirds game is just as unapealling, although for different reasons. Graphics are fine for NES standards, and even though the music could be better it’s not really a disaster. The main problem is that there’s too much fan service and too little excitement in the gameplay, which then results in a drab, trivial, soulless shooter. 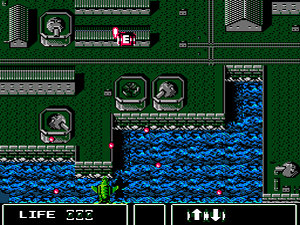 Deadly waters of the Indian Ocean

There’s a strong emphasis in story and characters in Thunderbirds. Jeff Tracy is the mentor of the team that protects the Earth, formed by his five sons Scott, Virgil, Alan, Gordon and John. Each one of them is assigned a particular vessel/ship with distinct powers. They’re aided by the scientific genius of dr. Brain, and together they fight against the villainous threats of a bald evildoer named Hood. Interactions between these characters are shown all the time as you transition from one stage to the next while an increasingly irritating song plays along (there came a point where I just didn’t want to read the dialogue anymore, so I pushed START to finish them faster). Plotwise the Thunderbirds have 60 days to foil Hood's plan to build a power source that's capable to wipe out the planet.

Each life has three health cells, and once you die the team needs 3 days to fix the ship for a new attempt at the failed mission. A succesful attempt is the equivalent to 1 day. The game is over only if you fail to fulfill your main objective within the period of 60 days. Missions are chosen by the player in three main sites around the world (North America, Indian Ocean and Asia), and in all of them you unlock secondary missions than can also be chosen at will. In total you need to play 8 missions before going into outer space to stop Hood's final attack, in areas that include ocean, city, caves with volcanoes and high-tech installations. There isn't really a consistent theme distribution throughout the levels, but in general the hardest missions as those set in Asia, whereas North America poses the easiest challenge of them all. You can't choose the pilot/ship because boss Jeff is bossy and assigns specific ships to specific missions.

Each craft you pilot has three power levels upgraded by taking the E items. This item, as well as L (recovery for one health cell) and O (orbital device, also widely known as option) is released only by destroying red enemies. The player can carry up to two options whose formation is cycled by pressing button B in the controller. Button A is used to shoot, and while it does not have any autofire function the strangest thing is that options are always firing regardless of you pressing A or not. Initially only forward and backward formations are allowed, but as you make progress other formations are acquired with special items once you get through selected areas. Further formations include sideways, circle and forward-diagonal (spread). Unfortunately most of the time the firepower provided by the options is too weak to do any damage, but in certain places they might help clearing turrets fixed on walls.

Taking a hit not only takes one health cell away, but it also downgrades the main weapon by one level. Upon death you lose all upgrades including options, but if you manage to make it out of a stage alive you get a full health bar in the next mission. Besides the outrageous amount of lives you receive by default with the 60 days scheme, that's mainly what makes Thunderbirds an easy clear. The only parts that might offer some resistance are the occasional tank that fires very fast vertical shots, the area that requires shooting through a marsh and the closing gates of the last level. Other than that, what we get is just insipid gameplay and the sorry lack of real bosses. A particularly annoying detail is that power-up items tend to drift upwards and disappear on the top of the screen, often making you go after them only to get hit by an obstacle (any contact to walls is deadly).

It's interesting to note that amidst the lameness of Thunderbirds lies a very clear inspiration from Namco's Dragon Spirit, most notable in the volcano areas and in the flower turret boss throwing petals at the player. Fans of the show might find some enjoyment in the animated intro that mimics the famous countdown from the TV series, as well as the brief cut scenes where the futuristic vehicles depart for battle in each level. However, that doesn't deny the fact that this is an extremely bland and short game. And it's just baffling that the developer chose to implement a password feature while completely ignoring the scoring system.

So there we have it in the picture below. No numbers, just the ending credits. 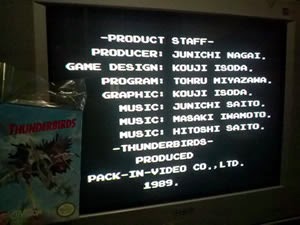