A quick glance at Keio Flying Squadron 2 isn’t enough to tell you everything about the game, at least as far as quick glances go for regular games. Sequel to Keio Flying Squadron on the Sega CD, this second chapter appears as an amalgam of action genres where platforming represents the main gameplay style you’re bound to taste. It’s an eclectic adventure infused with all sorts of little deviations from the norm, including several autoscrolling levels from which two sections mirror the shmup ambience of the first game. For a while I wondered if that was too little to label it as a symmetrical hybrid shooter, but given the awesome nature of the game and the gorgeous sprite work involved I figured it was definitely worth a look.

The wackiness that was already present on the Sega CD is naturally heightened by the platforming element, an aspect that allows for a more diverse touch of humor and Japanese culture. Bunny-suited Rami is still hungry, but this time she’s after an ancient orb stolen by a mysterious princess. Her pet dragon Spot is back, as well as Dr. Pon’s raccoon army in their neverending mission to spoil Rami’s quest, which spans across five stages with three to five areas each. Several low-res animated sequences are shown throughout the game, and together with the spoken dialogue they provide some laughs and a good insight into the story and the characters. One note though: Keio Flying Squadron 2 was released in all main regions except the US, so the best version for Westerners to enjoy it is the European one (it’s got fine dubbing - same voices from the Sega CD). Besides, the Japanese disc is extremely heavy on the Japanese language, down to the menus and score display. 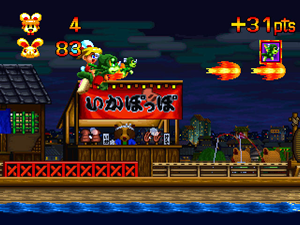 Even though the flow of the game is a little clunky in the platforming sections, the general design is much in the vein of the classic Sonic the Hedgehog. Dispatching opponents is primarily achieved by jumping on them with button C, but you can also attack with button B by using one of the three weapons found with enemies or inside chests: a hammer, an umbrella or a bow. The umbrella makes Rami fall slowly and offers protection against falling objects, and the bow can be used to hit enemies at a distance by being charged. To pick up or get rid of a weapon you need to press A (only A throws it away, ↓ + A puts it down gently on the ground). Rami is also able to run, and by default you just need to keep the directionals pressed to do it (you can also double tap or use buttons L/R, these need to be set in the options screen). As usual, jumping and running go hand in hand with button holding and preserving momentum.

Death happens instantly when Rami gets hit unless you’re carrying an object or a weapon. In that circumstance, after you get hit you let go of whatever you're carrying while being invincible for a very short time. This means that carrying something at all times is the key to survival in the platform sections, just be quick to recover the weapon before it disappears after flashing for a few seconds. Don’t count on the invincibility window when hit to get through the danger though, the grace period is really very brief. Dying sends you back to the latest checkpoint, always memorized at the point where you meet and wakes up a sleeping Spot dragon. Notes about weapons/objects: Rami must be bare-handed to pick any weapon, but she will always be able to lift one object while carrying a weapon or not; when umbrellas are open you're not able to hold on to ladders.

Regarding items, golden rabbits are the main ones you’ll see everywhere in the game, either just waiting to be collected or hidden inside chests. For each hundred rabbits you win an extra life, and the good news is that the rabbit counter isn’t reset when you die. Other items placed at tricky locations or inside secret passages consist of 1UPs (Rami’s face), extra continues (Spot’s head) and entry tickets to a bonus level (a green creature waving his arms). Additionally, a plethora of objects is scattered around for the player to tinker with, each one supposedly having a specific use in the game. They can all be carried around and thrown, but aside from the most obvious ones (the spring pads, the big hand, the boxes, the clown sticks) I haven’t figured out the use of any of them. Many of these objects can’t be broken either, otherwise they’ll add negative points to the score. Wait, negative points you say? Yes, scoring in Keio 2 is displayed in positive and negative terms. Every hit suffered deducts 5 points from the score, so if you keep getting hit without dying the score display might eventually reach negative hundreds. On the other end of the spectrum, most enemies are worth 1 point only, with special foes or boss phases giving out 2 or 3 points each.

The only shooting segments in the game are stages 1-3 and 5-1. The first takes place over a river in Edo/Tokyo and the second unfolds in outer space. Gameplay is almost the same from the original chapter on the Sega CD, with shot set to B and speed selection to X/Y/Z. Incoming items consist of P (power-up) and auxiliary shots that cycle between homing baby dragons and directional mines (each of these attacks can be powered up three times). Both shmup stages are rather easygoing and do not pose much of a threat. Just beware of huge cannonballs shot from the background in the river stage, as well as sharks coming out of the water and leaving almost no room to dodge. Don’t be afraid to fly behind boats and within the water because you’ll find a few hidden items there. Last but not least, whenever you die in a shooting section you’re instantly respawned.

There’s no denying that Keio Flying Squadron 2 boasts outstanding graphics with vivid colors, lots of details and sheer creativity in every single corner of the screen. For a gamer that doesn’t fancy platforming games that much anymore, the two shmup parts are totally worth the extra effort to get there. Granted, the music in both of them is lifted directly from the first game, in what seems to be the only glaring slip (or sign of laziness) from the developer. The rest of the soundtrack ranges from mellow to upbeat, but always with a nice Japanese flavor to them. Other autoscrolling stages include a train ride (2-1) and a trippy rollercoaster (3-1). Rami also goes underwater in section 3-2, “takes part” in a martial arts tournament in 5-2 and faces a handful of weird looking bosses, from which my favorite is the haunted mansion floating head. The final boss is disappointing though, instead of fighting that huge green beast you’re just supposed to escape from his throat in a sort of dynamic ladder generator. In stage 5-4 you don't even get to play as you just watch Rami getting sucked into the creature's mouth. Speaking of character interactions, these can't be skipped during the actual gameplay. Cut scenes can be properly skipped though.

As far as scoring goes, the biggest source of points is by far the bonus level, followed closely by the two shooting stages. A bonus level offers several point tokens (negative or positive) accessible by jumping over spring mats in an endless vertical pit. Since the big points are at the very top, not falling is essential to come out of the level with a nice score boost. On the other hand, if you keep falling chances are you might come out with a lesser score than the one you had prior to entering the level. When you start the game it takes just one special item (the green creature waving his arms) to have access to this bonus area, but later on you definitely need more of them because bonus levels get scarcer. Bad performances in platforming stages can be disastrous to the score, and I can surely say I had my quote of ruined runs because I panicked and kept dying inside the caverns, the flying boat stage or the ninja castle. By the way, the ninja castle is probably the hardest level in the game, full of traps, revolving floors and deadly iron pendulums.

Every progress is properly saved in the console’s internal memory. Besides the regular settings of the options menu there’s also an “Extra” area that shows maximum and minimum scores achieved, several helpful tips for progressively negative results (down to -125 points) and lots of rewards in the form of artwork and background information on all characters and enemies (up to +500 points). It’s all very neat and definitely worth a read/sight, just like the game itself: a moderately challenging and fun action romp. Too bad the next (and last) installment in the series, released for the Playstation, is a party game that's pretty much unplayable for us Westerners.

My 1CC score in Keio Flying Squadron 2 on Normal is below. The picture was taken at the last platform of the final level, before the screen fades into the ending credits. 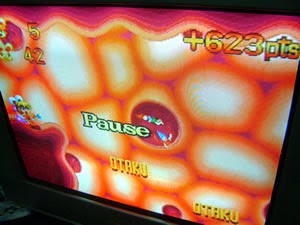