My knowledge of the Bandai Wonderswan haldheld game console is virtually none. I know only that it’s somehow close to the Atari Lynx as far as technical specs go. Since I’m not coming close to a Wonderswan anytime soon, it seems reasonable to accept that Judgement Silversword represents the shmup apex of this relatively unknown gaming platform. And the most interesting fact about it is that Judgement Silversword started as an entry in a game development competition held by Qute in 2001. After winning the contest it still received a few tweaks before a definitive physical release in 2004 with the subtitle Rebirth Edition.

There was nothing but praise for this game among those who had experienced it in its original platform, so it’s no wonder many people were excited to know it would be included as a bonus title in the 2011 release of Eschatos for the Xbox 360. The disc also includes Silversword’s spiritual sequel Cardinal Sins, and for that reason Eschatos is considered to be a perfect package to get to know the works of developer M-Kai. All three games share similar characteristics, that’s why playing one of them automatically makes the others somehow familiar. And going by the time I spent with Judgement Silversword – because it's the first one I actually decided to play – what lies ahead of me is nothing short of outstanding. I heard somewhere that the epicness of Radiant Silvergun was one of the main inspirations for the overall feel of this game and I agree. Obvious differences aside, it makes perfect sense.

Stages in Judgement Silversword are very short in the beginning, increasing in length and difficulty as the game progresses. They connect to each other seamlessly as you clear successive waves of enemies and fight the “judges”, bosses that are always preceded by the ominous message HERE COMES THE JUDGE. Graphics and music are wisely minimalistic and bear a delightful 8-bit flavor, creating a unique atmosphere and effectively adorning the game’s rhythm. All things considered though, it doesn’t take long to realize that the strongest asset here is gameplay. Intense, twitchy, demanding gameplay where urgency plays a big part and drives most of the player’s actions. Basically, kill a wave faster to trigger the next one and reap better time bonuses. And if you really care about scoring, in between speed-killing all efforts should be aimed at increasing the multiplier. 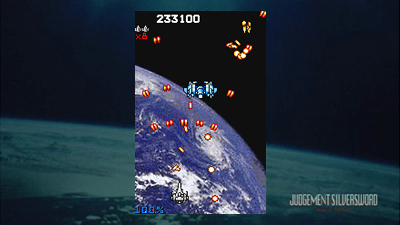 Original aspect ratio in all its old school glory

Your ship’s hitbox is that small square in the very center of its sprite, and its arsenal consists of three simple inputs: a straight shot, a wide shot and a shield. These are fully configurable, and my adopted setting was X for straight shot, RB for wide shot and RT for shield. Wide shot overrides straight shot, and shield has precedence over both of them. With the exception of lasers and a few evil projectiles fired by the true last boss, the shield is capable of wiping out or at least slowing down incoming bullets depending on their momentum: bigger bullets can’t be nullified, and the ship will be pushed back as a direct result from the mass/speed condition of the enemy or bullet. Shield usage is limited and indicated by the percentage shown at the lower left corner. It shrinks as the percentage lowers, being automatically recharged if you stop using it (it recharges a little faster if you also refrain from shooting).

By using the shield and connecting shots on enemies you can raise the multiplier to be applied over everything that takes damage. Note how you momentarily boost the multiplier by grazing bigger bullets or damaging large enemies with the shield. Whenever a multiplier is in place you see it appear beside the destroyed enemy, and the risk/reward relation that arises from this mechanic is what often causes the player to unconsciously improve his strategies towards the successively tougher enemy formations and bullet spreads. Of course that only applies for those who want to delve deeper into the scoring side of the game, otherwise the shield is pretty much just a resource for safety against the most intricate bullet showers.

Surely Judgement Silversword has a light start, but the ambience inspired by titles like Star Force and Zanac eventually evolves to something very close to bullet hell in the second half of the game. Surviving the harder waves and bosses of later stages is only possible with due practice, but those frequent extra lives granted by the game definitely help, if only at a psychological level (and in pure Compile fashion every time you take a 1UP there's a brief invincibility period that can be useful to evade hairy situations). The 1UP routine seems to be directly related to survival time and the number of enemies you’re able to kill (kill more enemies and die more often to get 1UPs sooner). You might even get a 1UP after you die your last life! In a well played credit it’s possible to reach Divine Flow, the evil judge of stage 30, with more than 10 spare lives. That’s a good entry point for the fight against the true last boss in stage 31, which can only be seen by getting there on a single credit. Continuing makes the game end after stage 30, but since the continue sends you back to the start of the level I doubt anyone will consider beating Divine Flow with only three lives an easy task.

My 1CC + only two deaths against Divine Flow!

Regardless of how you approach it, Judgement Silversword is an incredibly fun and addictive shooter. There are, however, two non-intuitive aspects in the gameplay that are extremely important if you're committed to the task of achieving a 1CC or chasing a higher score. The first one is the firepower boost you get by holding straight shot and tapping wide shot at the same time, which produces the effect of having both shot types active simultaneously. Not only this leads to faster enemy kills, but it also induces slowdown in key areas and helps to raise the multiplier faster (by doing it you’re landing more shots on nearby enemies). The second non-intuitive aspect of the game is the fact that the base multiplier increases automatically if you keep the shield at 100% at all times, meaning you can’t use it on bullets at all, only on enemies (by doing this the multiplier won’t go down to ×1 whenever you stop shooting). Blocking a bullet with the shield or dying will reset the base multiplier, therefore the general plan is simple: don’t die and don’t use the shield unless you know there are no bullets around. The benefits to scoring in the long run outweigh anything you can do by normally manipulating your resources to increase the multiplier.

Of all great features built into this wonderful shmup, the one that strikes me the most is how varied it is in regards to the amount of techniques you need to bring into play in order to survive the challenge set by the game. Macro and micro-dodging play huge roles in equal measure, as well as point-blanking, herding, grazing and a good deal of crowd controlling. The hardest parts often derive from pattern overlapping, so knowing enemy behavior and proactively reading their random formations is imperative to survive. I only wish the judges had a health bar so that I could know when they're about to die.

Upon beating the main game on Normal you unlock a Special mode made of only bosses. Some of them are lifted from the regular game, some of them shoot harder patterns and some are completely new. It’s a much harder game to beat, but if you succeed you’ll then unlock a secret ship to be used across all game modes. The interface provided by Qute for Judgement Silversword is excellent and includes stats for everything you do, from play time to number of coined credits. Play time is also what seems to determine the increase of available credits until you get to free play status (there’s a stage select option that doesn’t quite cut it for practice because the latest stage it will let you start on is the 27th).

If the Xbox 360 is connected to the Internet high scores can be uploaded to the online leaderboards. Unfortunately I wasn't online when I got the 1CC high score below. Coming up next is Cardinal Sins. :) 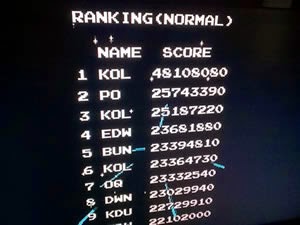