Playing a game for a limited amount of time in order to squeeze the maximum amount of points from it seems to be a nice concept for many people. Commonly referred to as “caravan” modes in the shmup world, these quick timed romps surely have their fans. I’m not one of them in the slightest, since I almost never touch any of the extra caravan content that comes with a few games and when I do I get bored really soon. However, to my surprise I have recently found out that Cardinal Sins might probably be the closest you can get to a hybrid between a full-fledged shooter and a caravan game. And it works like a charm, I’ll tell you that.

Originally a homebrew title released for the Wonderswan handheld console but only playable with a special development software, Cardinal Sins became more available to everybody around the world when Eschatos came out for the Xbox 360. Eschatos has it as a bonus game, as well as the title that represents the birth point of everything about this particular retail release: Judgement Silversword. Silversword is, in fact, the direct basis for Cardinal Sins, which builds upon its assets and gameplay while implementing new ideas based on the concept of the caravan. It’s essentially a shorter and much more focused experience that’s easier on survival merits but still very challenging for those who like to chase high scores.

As its name implies, each of the seven cardinal or deadly sins receives a depiction in the game as a single stage. Each stage lasts one minute and grants the player a ranking based on his/her performance against the particular rules of the level. This ranking ranges from S (100% completion) to F (failure signaled by the loss of all available lives) and is directly related to the bonuses you get at the end of the level (an S is worth 10 million points). In the end of the seven levels you are “judged” and an average grade is given based on all results, and if you achieve a certain minimum grade you’re entitled to fight the final boss. Failing to do so ends the credit prematurely while the game politely thanks you for playing. 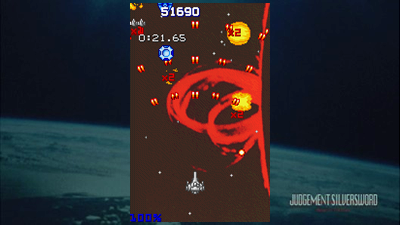 If you’ve played Judgement Silversword before Cardinal Sins you’ll feel right at home with the controls because they’re exactly the same. One button is used to fire a spread shot, another button fires a concentrated straight shot and a third button activates the shield. This shield is capable of slowing down and even blocking/clearing some of the bullets (not lasers), and its usage is key to increasing the multiplier applied to the base value of every destroyed enemy. By default the multiplier can be (1) temporarily raised by using the shield on enemies and bullets in succession or (2) permanently raised by not dying and not using the shield at all on bullets. However, since Cardinal Sins is so short and has a very specific stage-based scoring system, method #2 just isn’t feasible and won’t take you anywhere. Furthermore, the multiplier itself is never more important than fulfilling the requirements to achieve the much desired S rankings.

So how does it work then, this objective-based 1-minute stage thing? Let’s see…
In each of the above levels the player receives a new set of lives to complete the mission. This means that even if you’re on your last life when a stage is over you’ll start the next one with 4 ships in reserve. The only exceptions to this are the second and the final levels, which always start with 2 ships in reserve.

Despite some beefed up background graphics, a few new songs and the new elements in selected stages, all you see in Cardinal Sins is lifted directly and can be understandably mistaken for Judgement Silversword. Naturally all of the general gameplay strategies that work on Silversword also apply here, despite the little tweaks here and there. The spread shot, for instance, has a reduced reach, so take that in consideration when using the “trick” to increase damage by holding straight shot and tapping spread shot. Performing well in each of the seven stages is rewarded with bonuses when the last stage starts because each mirror shield that appears might deliver a special item upon death based on the rankings obtained: S is worth 5 million points, A is worth 1 million, B is rewarded with an extra life and the rest don't give out anything. This means that playing with ranking A or higher makes the final mirror shield boss harder because then you'll have only three lives to kill him.

Cardinal Sins is great for a concentrated burst of fun, besides obviously presenting excellent replay value because there is always room for improvement. It's got local and online leaderboards, tracking for several game stats and fully configurable controls. I couldn't decide on a favorite sin/stage since they're all so diverse and short, but there's an extra game mode called MARATHON where you choose one of the seven levels to play neverending stages based on its corresponding sin, complete with continuously increasing difficulty and suicide bullets. As for the main game modes, the basic differences between them are the random nature of the enemy waves and the absence of the on-screen timer on NORMAL, as opposed to TRIAL (you hear a sound cue when the stage is about to end on NORMAL mode).

Most of my time was dedicated to NORMAL mode, with the final result shown below. The only stage in which I never achieved an S ranking was Greed, but nevertheless I was able to make into the top 10 of the online leaderboards. I feel it's time to move on, so Eschatos here I go! 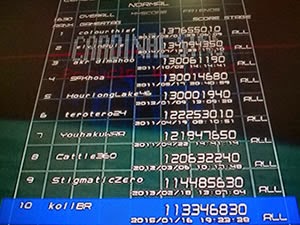