When thinking about rail shooters most of our memories tend to cling to the titles that somehow defined this particular style of the shooting genre. Maybe more so than in any of its subgenre variations, stellar games like After Burner or Space Harrier tend to completely overshadow the efforts of lesser known companies, be it in the arcade or in the console scene. My perception of G Vector is that of an obscure oddity that very few people know of, partially thanks to the above and also because it appeared exclusively on the Sega Saturn and only in Japan. Nevertheless I bet many shmuppers will immediately recognize something very familiar about it.

This familiarity comes up as soon as you start the game. For all visual purposes, G Vector is like an alternate version of Raystorm. Even the spaceship and everything about it seems to have been modeled after the R-Gray units designed by Taito, down to the complete absence of extends. I never heard of developer SoftOffice before and don’t know of any other game they might have made, so it’s no surprise that G Vector isn’t technically on par with its source of inspiration. It obviously lacks Raystorm’s graphical finesse and brutal difficulty, but it’s a reasonably fun rail shooter if you’re able to cope with a few awkward aspects of the gameplay. Sound effects and soundtrack do their job at a basic level, with the BGMs in stages 4 and 5 clearly stand out from the rest.

Anyway, what you see is what you get in this game. There is only one difficulty setting and no special modes besides Score Attack, where each stage reached is unlocked for individual play/practice with infinite lives. Other than that, in the options screen you’re allowed to choose between regular and reverse controls, listen to a sound test and visualize the enemy gallery. 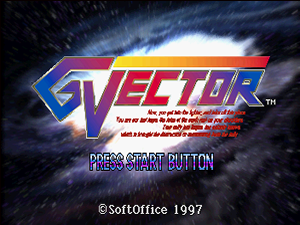 I tried to read what's below VECTOR but the characters are too small...

I’m completely clueless about the story in G Vector, so let’s stick with the good old alien threat that needs to be purged from the galaxy. The journey to salvation is fully rendered with the aid of polygons for enemies, explosions and landscapes, with sprites reserved exclusively for bullets. Some effects that resemble mode-7 are also in place, but none of these graphic devices offer anything out of the ordinary for a polygon-based game. There's a decent color work but textures aren't very detailed overall. Some of the screen action is very intense though, which helps to fuel the adrenaline across six short levels at the expense of a little slowdown. Loading times in between stages are fair, but they could’ve been shorter.

The control scheme is uncomplicated: A shoots, B fires lasers and C shoots with autofire. Lasers will hit anything targeted by the ship’s reticle, to a maximum of eight targets at once. Exactly like in Raystorm, the more targets you have locked on when you fire the laser the higher the rewards in points are: a destroyed first enemy is worth a bonus of 200 points only, but each successive target that’s killed multiplies this value by 2. The geometrical progression leads to a total 51.000 points if you’re able to vaporize a lock-on of 8 simultaneous enemies. Note that the targets must be destroyed for the points to register, that’s why it’s sometimes advantageous to build up the initial lock-ons on a stronger target and only then locking on to cannon fodder.

Since the lock-on window lasts 5 seconds and you’re only able to destroy what’s actually on screen, getting those bulky bonuses for 8 targets at once isn’t such an easy task. Enemies arrive and disappear relatively fast in the most varied formations, and the bullets fired add another barrier to the act of locking on to multiple targets. Enemy bullets in G Vector come in several shapes and colors, but those of the pink type are always fired in bursts that leave a long trail behind them. At first they're kinda weird to dodge, but once you get the hang of it you notice they’re actually the easiest attack type to be avoided. Much trickier are the firing spams inside the cavern of stage 4, the spinning bullet sprays of the large ships in stage 5 and the multiple trailing streams of the last boss.

My 1CC run of G Vector

Everybody will probably agree with me when I say that taking only two hits before biting the dust is really cruel. There’s a little compensation for the lack of extends though, since physical obstacles also do not exist at all in G Vector. From start to finish there are absolutely no walls of any kind and you can’t get hit by any enemy, not even bosses or those fat butted bugs of the last level. That’s the best aspect about the gameplay because with obstacles of the way the player is free to focus strictly on strategies to overcome each approaching wave. On the other hand, it’s also very important to adapt to the way aiming is implemented (you’re always aiming upwards) and to be careful with borders and corners because of a mysterious freezing bug that happens when the screen is cluttered with bullets: there were times where I would get stuck/paralyzed like a sitting duck for no reason at all. A few animation sequences take place with enemies shooting at you at the same time, so keep moving and shooting to get through safely.

All staples of the subgenre make an appearance in G Vector, such as city, desert, ocean, caves, tunnels and outer space environments. Bosses play a big part all the way to the end, moving a lot into and out of the screen while dropping a variety of aimed and non-aimed bullet patterns at the player. Every boss – here called guardian – has multiple destructible parts that can also be laser-chained, thus adding more points to the score. Pay attention to the timer though, because if you fail to kill the boss within the allotted time he flees and you get no rewards at all (the only exception to this is the last boss). Destroying boss parts can also lead to an easier fight (by blocking the associated strikes from happening) or trigger different attack patterns (on the 4th boss, by destroying his gun prematurely). Don’t forget to keep shooting the boss if he’s in sight while the victory animation takes place, it’s still possible to get a few more points from the segments that weren’t dismantled.

The most important survival strategy is being aggressive and eliminating the most dangerous threats as fast as you can. Stage 5 in particular is a real offender in that regard, with a bunch of strong enemies overlapping their attacks in almost unavoidable ways. Fortunately we’re allowed to properly practice in Score Attack mode, which also offers resources to improve scoring and completely destroy bosses. G Vector saves high scores automatically, both for the main game and the individual stages in Score Attack mode. The default number of continues can be increased to 9 with a secret button sequence at the start screen, but you’ll only see the ending sequence if the game is beaten in a single credit.

Accomplishing the 1CC mission was fun, and my best results are below (look how interesting, 1CCing adds a single digit 1 to the score). 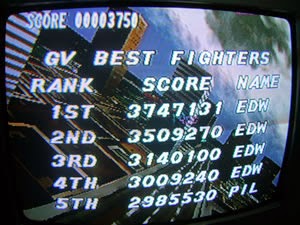