As a kid growing in South America, I was naturally exposed to just a fraction of the video game industry during the 16-bit era. The Mega Drive and the Super Nintendo were all that mattered back then, the PC Engine being a totally unknown system up until my adulthood. So I grew up with a very specific idea about a titled called Hellfire, which I had obviously played (probably on a pirate cartridge) on my good old Japanese Mega Drive. No matter how you approached that game, Hellfire lived up to its name. The crushing difficulty demanded us little kids to get better or just give up, after all the game had checkpoints and checkpoints were one of the most evil things created by video game developers.

Enter Hellfire S, a colorful and cut scene ridden alternate version of Toaplan’s arcade shooter, reworked by NEC Avenue and released exclusively for the PC Engine CD. Subtitled in its opening screen as The Another Story [sic], Hellfire S can be a lot of things, especially when compared to the Mega Drive version, but the aspect that will matter most for a lot of people is that it’s a lot easier than Sega’s counterpart released in cartridge format. The port for the PC Engine CD is also more faithful to its arcade origins in gameplay, except for the toned down difficulty and the fact that it doesn’t loop. Since this is yet another title that halts at a dead end after the closing credits are shown, pause the game as soon as the final boss goes down or else you won’t be able to see your score. 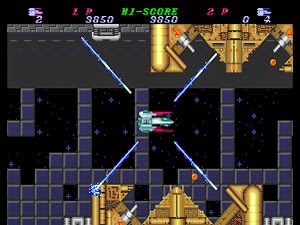 Is that someone playing Tetris in the background?

The anime paint applied over the game seems to tell the story of two female pilots dragged to another one of those missions where the fate of the galaxy rests on the multidirectional guns of their spaceships. Unfortunately everything is in Japanese, so proper understanding of the story is severely compromised for Japanese illiterates like myself. The gameplay is simple enough to allow immediate acquaintance for everyone, with button II used to shoot and button I used to cycle through the four available types of directional weapons: forward (red), rear (yellow), 2-way vertical (green) and 4-way diagonals (blue). Collectible items brought by special carriers include speed-ups (S), power-ups (P), two-hit shields (G), 2.000 point bonuses (B) and extra lives (1UP).

Each stage in Hellfire S is a colony that needs to be freed from evil. Overall the tone of the graphics is a bit of a mess, with the opening level happening inside a space station, the second one on an Egyptian-theme planet and the third and the fourth mixing organic and cave-like walls. Moving beacons and large ships appear in stage 5, while huge monsters with turret-ridden hulls try to stop you in the last level. Naturally, freeing all of these colonies requires the player to make good use of the available arsenal. Weapons cycle in a predetermined order (red → yellow → green → blue → red), and that leads to the instinctive development of switching strategies in some of the most intricate parts of the game.

Under pretty much all circumstances, the gameplay in Hellfire S doesn’t live up to the game’s name. Bullet count and speed is easily manageable from start to finish (it can be quite a shock if you try this version right after playing the Mega Drive port), most bosses are pushovers and the only level that demands a more dedicated approach is the last one. The absence of checkpoints is another factor that corroborates the conclusion that this version boasts an easier challenge, regardless of the default slow speed of the ship. Be careful though, collecting more than one speed-up can be risky during sections with many narrow corridors, such as the final stretch of the fifth stage.

Other details that might be brought to the table in a comparison between ports are the ship’s color not changing according to the current weapon and the overall lack of parallax layers on the PC Engine CD. The first of these characteristics is actually in line with the nature of the original arcade game, which only serves to cement the notion that Hellfire on the Mega Drive is one of the most interesting cases of a console adaptation being actually richer than its source. Of course it’s still a very punishing shooter and for that reason Hellfire S is a more sensible option for many people, never mind the apparent lack of depth in the scoring system of the latter. EDIT MAY-2015: In a very obscure and unexpected twist, if you manage to destroy a weapon carrier with the rear shot (yellow), it will release three pick-up items instead of just one (kudos to my fellow shmupper Perikles for contributing with this precious info). Also play risky for more points: all items turn into Bs once power and speed are maxed out.

For those who care about such an option, Hellfire S allows co-op play, a mode that’s absent on Sega’s console. Just remember to carry a pair of turbo controllers because there is no autofire in this port. As with many other PC Engine CD adaptations of arcade titles, the game comes with a rearranged soundtrack that’s especially cool if you happen to like the original tunes. I was never overly crazy about them, but the synth-infused CD tracks definitely sound better and less grating than the primary compositions. It's more of an improvement that what was accomplished with Zero Wing, another Toaplan horizontal shooter that also got a port for the PC Engine CD but on musical terms doesn't fare better than its couterpart on the Mega Drive.

By going into the Mode Select option at the start screen you can select difficulty (default is Easy) and player speed (slow/fast, slow as default). There’s also an option called “vector reset” but I couldn’t figure out what it does – I played the game and continued a few times with different settings for it, but I didn’t notice anything. The 1CC high score below was achieved on Normal with everything else at defaults (player speed = slow). 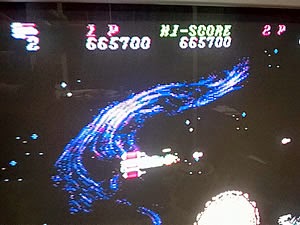