Games and their titles can be deceiving sometimes. For a long time I thought that Violent Soldier was part of the Star Soldier series of shooters. It was then brought to my attention by some fellow shmuppers that not only did it have nothing to do with Hudson Soft’s popular franchise, but it also boasted one of the most intricate difficulty levels within the PC Engine shooter library. I was naturally curious, especially when reading a few comparisons between this game and Rayxanber II regarding their supposedly extreme difficulties.

Come the day and there I was on a Sunday morning, cruising through the first levels of Violent Soldier. Indeed there’s a steep increase in difficulty as the game enters its second half, a very clear point of inflexion that in this case segregates casuals from persistent players quite abruptly. Perhaps a way to warrant the game’s name, I wonder? On an even further assumption, would Violent Soldier be instinctively aiming at teaching players the importance of being proactive? Is it all about fighting violence with more violence then? Jokes aside, this is actually a very straightforward horizontal shooter that drinks from the R-Type fountain but has enough personality to stand on its own. Note that I’m talking about the Japanese HuCard here – the game was also released for the Turbografx-16 as Sinistron. 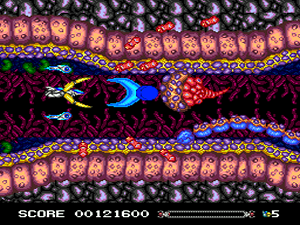 Undescribable creatures in the biological stage

There are six stages in Violent Soldier. Just like many other PC Engine shmups, shot works on button II. The ship you control is seemingly too long, but only until you acquire the first colored power-up, which by pressing button I allows you to open its frontal hull in order to stretch the side reach of your new gun. There’s a noble reason for the mobility of that golden hull: it protects the ship from incoming bullets. A second power-up allows an even wider opening angle for this “beak”, thus exposing the ship’s hitbox even more at the expense of a wider shielding offset area. Perhaps more important than the beak is the shard-looking item that acts as a shield once you take it, the first one hovering above and the second one below the ship. These glowing shards block enemy bullets and can deflect some of the asteroids in stage 4 (important: both the beak and the shards cause damage by contact).

Your arsenal consists of both the regular shot and a charge shot. By charging button II the player can unleash a circular blast that damages everything within a close radius. This blast is the same for all three types of weapons, which are switchable with the corresponding power-up colors collected from destroyed carriers: red (vulcan), blue (wave laser) and green (homing missiles). My first realization when playing this game is that the charge shot is slow, cumbersome and ultimately useless. On the other hand, if you want to go the whole way you’d better get yourself a turbo controller because the game has no autofire whatsoever. With the beak in the closed position you get a faster firing rate, whereas a full open beak reduces the rate of fire in proportion to how wide the shot becomes. It’s all a matter of how defensive or aggressive you want to get, but you also have to consider that point blanking plays an important role depending on the weapon you’re using.

The last aspect of the basic gameplay is speed. With such an awful default speed the ship can’t do much, but fortunately Violent Soldier always throws a good assortment of speed-up items at every checkpoint. Each level is broken in half by an intermediate checkpoint, and the ease of recovery is one of the aspects that help destroy the myth of this being an impossible game (classics like R-Type and Gradius have tougher recoveries). That absolutely doesn’t mean Violent Soldier goes easy on you, because it doesn’t, and we can all be very grateful for the unlimited continues and the ability to continue from the start of a level instead of the intermediate checkpoint, a very nice feature that should be mandatory in all checkpoint-based shooters.

On graphical and musical terms it’s fair to say that there’s nothing special in Violent Soldier. It is competently put together though, with great use of color and very little, quite negligible slowdown. Starting in outer space and entering a base, the first level deceives you into thinking the game will be a walk in the park. Lightning strikes in the backgrounds of the caves during the second level, while an organic setting dictates the atmosphere in stage 3. The 4th stage is populated with lots of asteroids. Most of them break out in smaller pieces, but the ones with a metallic color will be drawn towards the ship when hit.

My 1CC run of Violent Soldier

Stage 5 seems to be directly inspired by R-Type’s stage 6, with lots of narrow passages and all those block-shaped ships moving about. Even though it feels less claustrophobic here, those tiny green walkers can do lots of damage with those fast bullets they fire. The best way to succeed is by devising a predetermined route and sticking to it. Also abuse point-blanking whenever possible and use walls to protect yourself when needed. A small note on point-blanking: doing it with the red weapon is okay anywhere around the screen, but due to its piercing nature the blue laser can only inflict good damage when you’re very close to the right side; the homing shot is practically useless from stage 4 onwards.

Finally, the last level ramps up bullet count and enemy hazards quite a bit, throwing wave after wave of overlapping enemies and patterns. Good crowd control is the way to go, always aiming for the most powerful enemies first and paying attention to the green globs that follow you around. It's as unforgiving as the last stage of Cyber Core, the other shmup developed by IGS for the PC Engine. At first I thought there would be a boss rush, seeing that you have to fight two very angry forms of the bosses from stages 1 and 2. But no, after that there’s just the final boss. I wonder if the developers went out of time or money to add the remaining bosses or if they thought two hard rematches were enough of a preamble to the final showdown. Unfortunately we’ll never know.

I haven’t tried it yet, but according to the Brothers Duomazov the Western version Sinistron has quite a few differences from the Japanese Violent Soldier. If you fancy something with heavy emphasis on memorization and aggressive gameplay (a.k.a. violence), the game is perfect for you. It’s definitely hard but it’s fun nonetheless and never unfair, with a level of randomness that can be properly controlled without incurring in nearly unbearable frustration, as in (just to close the comparison loop) Rayxanber II. Score extends set at 20.000, 50.000 and at every 70.000 points give you several attempts to overcome the harder checkpoints, also allowing checkpoint exploitation for higher scores.

My 1CC result on Normal difficulty is the one shown at the end of the video linked above (difficulty is chosen with the SELECT button at the start screen). The game halts at the following panel after showing the end credits in a very unusual fashion, and only resumes back to the start screen when you press SELECT + START. 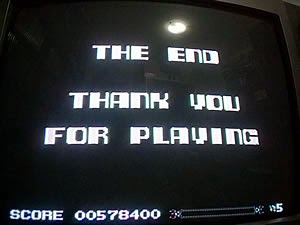