If widespread reputation is any sign of how a video game should be perceived without even being played, then Sol Divide is the epitome of failure, of dread, of sheer shmupping horror. It’s a particularly elusive subject for trash talk and it’s got the potential to bring out the worst from even the most sensible player out there. I myself remember distilling my hatred against it everywhere when I first started digging into the fascinating universe of shooting games, and it wasn’t until I was practically forced to play the Playstation port that I actually saw something beyond the almost insurmountable layer of presumed mediocrity.

Similarly to Toaplan, Psikyo was a company more akin to vertical shooters, so it’s no wonder it only made two horizontal shmups during its entire lifetime. However, bearing of horizontal orientation is pretty much the only common ground Sol Divide shares with Sengoku Blade. Sol Divide’s borderline experimental gameplay mixes shooting and melee slashing and is unmatched in its pace, clunky mechanics and overall uniqueness – or weirdness, some might say. It’s extremely short and intense while absurdly overwhelming at times, thanks to a series of random elements that are capable of draining that precious health bar in a snap.

The story of Sol Divide involves an elderly evil man named Efter and three brave heroes who stand up against him to end his reign of terror in a medieval world where knights, undead creatures, wizards, sylphs and winged beasts dominate the skies of several villages. Graphics and music reflect this ambience quite decently, I must say. Each level is preceded by a brief dialogue showing a little of the interaction between these characters, too bad the Saturn port came out only in Japan and all in-game texts are in Japanese. The disc comes with a straight rendition of the arcade game in its Arcade mode. Original is a special version designed exclusively for consoles, infused with RPG elements and with rearranged stages/enemies. Once again I haven’t even dared to dip my toes in Original, focusing on a new challenge for Arcade mode: loop the game with Tyora. 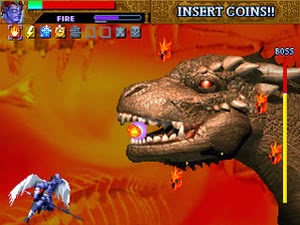 Kashon faces an escapee from the Prehistoric Isle

Tyora is the only woman in the group of playable characters, a wizard with decent shot and magic power but terribly short melee reach. Vorg is the dark knight specialized in sword fight and with stronger melee abilities. Kashon the hawkman stands as the most balanced of the three, with the clear advantage of having the best melee reach thanks to his long spear. Each character is able to fire, to slash and to cast magic spells (all inputs configurable) chosen from a wide assortment of magical powers shown below the health meter. Magic efficiency varies according to the enemies you’re facing, consisting in the most important aspect of the gameplay besides the slash attack.

“So are magic and slashing more important than shooting?” As weird as it might seem, YES is the answer to this question. While you can shoot enemies from afar, they will eventually get close and unless you react they’ll end up taking up huge chunks of your life bar. That’s when performing slash combos are useful, since they inflict good damage and stun enemies while pushing them back. Each character has a specific set of commands to do the combo though: the sequence for Kashon is slash, slash, slash, →, slash, changing the directional to ↓ for Tyora and ↑ for Vorg. Naturally Kashon comes off as the easiest character to play with because of his combo and the better reach of his melee weapon.

Most enemies when defeated release items that bounce around for you to pick up. These can be power-ups, health potions, magic potions and herbs (increase max health), some of them with different sizes. A few magic spells are only obtained through items for a single use only, and the more powerful the spells are the bigger the amount of magic energy they consume. There’s also an exclusive powerful spell that’s specific to each character: “Phoenix” for Kashon, “Summons” for Tyora and “Nightmare” for Vorg. While the main purpose of magic is to facilitate survival, melee slashing is the key to higher scoring. All enemies that are killed with the final blow of the slash combo have their base value multiplied by 4, a factor that’s reduced to 2 if you happen to register the kill in the second-to-last slash. Aside from the enemies in the level, in order to achieve higher scores it’s imperative that players dispatch all bosses with a ×4 multiplier. Hint: go to the options and switch Score Display to ON to see your score and the multiplier tags.

As a last note on gameplay, I’d say familiarity with enemy behavior is the defining condition to succeed in Sol Divide. Those brief flocks of enemies and each of the massive bosses are there to suck you dry so that you reach Efter with low health. The first of his four phases is the nastiest enemy in the whole game, so my advice is to try and get there with lots of energy to spare (the winged creature, the dinosaur and Efter himself in the end are pushovers when compared to the first form).

Adapting to Tyora’s awful melee reach wasn’t easy, but I needed to devise a basic plan to help me get the loop. In this plan the first magic I use is Fire against the four sylphs at the start of stage 4 (their straight shots are a pain to dodge). Then as the stone god boss is about to die I cast Freeze in order to get a ×4 kill. When the spikes from the worm boss start moving (level 5) I cast Meteor, which leaves him ready for me to get another ×4 final blow. The minotaur in stage 6 is tricky, and again if I have Freeze I use it to finish him off with ×4. Summons is reserved for the stone griffon boss of stage 7 while I attempt to time the damage with another ×4 multiplier. For Efter’s 1st form I cast Fire once or twice (if I still have it) to deal with the knight duo, but a ×4 is a very tricky matter of opportunity. Wind works well on neutralizing a few of the dinosaur’s attacks, but I prefer to Freeze him for the ×4 kill, casting away Fire against Efter’s final form.

Defeating Efter’s 1st form with Tyora is a daunting task. I lost count of how many times I got to him with a full health bar, only to be slaughtered like a filthy pig in an altar of sacrifice. Nevertheless I managed to fulfill my mission with her and reached stage 2-2, albeit with a lesser score than the one I achieved with Kashon on the Playstation. The second loop of Sol Divide has a different color palette, a lot more enemies with even greater resilience and is only accessible if you beat the game with a single credit. I’m sure I’ll have another load of fun when I revisit the game on the Playstation 2 to play with Vorg. 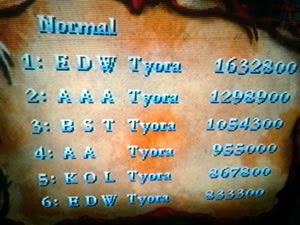