Those who’ve been around this genre long enough know that recognizing a Compile shooter doesn’t take much effort. Long stages, a multitude of weapons and frantic action: across the couple of famous series it gave birth to, that’s been the norm ever since Zanac saw the light of day. Expanding on the aforementioned aspects, the effectiveness of further Compile games – especially during the 16-bit era – varied quite a bit even though the challenge level often leaned towards the easy side. GunHed (or Blazing Lazers in the West, as released for the Turbografx-16) is frequently ranked as one of the company’s highlights, and if I may say for reasons that today seem more related to nostalgia than actual gameplay merits.

Of course GunHed does have some cool moments of shmup rush. The involvement of Hudson Soft in the development process is probably to blame for the unusual difficulty spike of the last third of the game, as well as the blended scheme of checkpoints and no-checkpoints that plays a pivotal role for those who’re serious about beating it. Hudson Soft is also the intersection that connects the game to the likes of Super Star Soldier, Final Soldier and Soldier Blade, which makes some people consider it an integral part of the Soldier series. As of today I haven’t ventured into those titles yet, but for now I can say that even though GunHed is unnecessarily stretched out, in its best moments the general atmosphere is of a well-crafted 16-bit shooting romp. And slowdown-free to boot.

Fire with button II, deploy bombs with button I and select between four flying speeds with the SELECT button. At first the amount of items and weapons at the player’s disposal is overwhelming, so it takes a little while to get used to all of them. Roman numerals correspond to the main weapons: I (photon blasters, Star Soldier 5-way gun), II (disrupt wave, good spread capability when maxed out), III (field thunder, electric laser beams with amusing visual flair) and IV (ring blaster, regular gun with rotating orbs). Collect the same type to power it up, or do it slowly by collecting the purple orbs. Alphabet letters create and upgrade auxiliary weapons: F (full fire, increases the power of the active weapon), M (multi-bodies, creates up to two trailing options), H (homing missiles) and S (shield). Furthermore, taking any icon for an auxiliary weapon is the way to acquire extra bombs, up a maximum of 16.

Regular carriers are responsible for bringing weapon items and purple orbs, even though you can get these from almost all enemy waves that are completely wiped out or from certain ground spots throughout the levels. However, players are allowed to carry only one type of main weapon and only one type of auxiliary weapon. It’s not possible, for example, to have the F enhancer and the S shield (not the natural single shield mentioned below) at the same time.

The simplicity of this weapon system is deceiving. After all, GunHed is filled with little mysteries that will only unfold for those who spend some serious time with the game. In the process of powering up your main weapon, for instance, a faint shield will naturally form around your ship, providing side protection against one hit at the cost of a power downgrade (the front and the back of the ship are still vulnerable though). For a certain amount of enemies killed special carriers appear bringing cycling power-ups that stand still when hit. Hit them enough or let them reach the bottom of the screen to see them turn into a blinking orb. Now for the catch: there’s more to their screen-clearing effect, since each blinking orb taken also gives you an instant respawn after you die. And that’s how you bypass checkpoints! Stockpiling these blinkers is the safest way to guarantee a chance at beating the tough final level of GunHed.

Another minor detail of the gameplay appears in the way auxiliary weapons work when maxed out. They acquire a temporary final upgrade that enhance their efficiency. A special case I’d like to point is the nature of the homing missiles, which are slow at lower levels but get very fast when maxed out. And they also fire more simultaneous rounds when used with main weapon I, which is an unexpected winning combination. One condition that tops this one in effectiveness is having the special 8-way shot, a secret weapon that’s only obtained by sticking to the following rule: empty the bomb stock and collect 30 purple orbs without dying or collecting any other item (only blinking orbs are allowed). A special power-up that looks like your ship will appear and grant you the 8-way shot.

Managing all these resources is the best aspect of GunHed’s gameplay. It’s harder to notice the gaps and the repetitive bits while you’re focused on finding the best weapon combinations. However, once a plan has been devised you start noticing how unnecessarily stretched some stages are. Some of them have mid-bosses and a few are certainly a joy to cruise through, such as the block-ridden treacherous level 3, the fast scrolling of the brain stage and the bubble area. The bad news is that by the time you get to the bubble level GunHed is already dragging, and the final level is pretty much a rehash of the 7th stage only with trickier enemies and a boss rush. Ultimately, the game just lacks substance to justify its long duration. 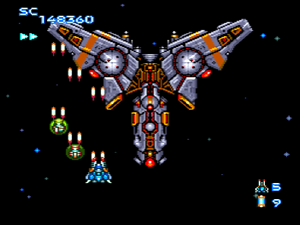 Destroy this boss arm by arm

The scoring system couldn’t be more simple. Kill everything you can and beat the game for a final bonus of 10 million points. You get no extra points for surplus power-ups, so use what you have for the sake of your destruction rampage. Going after the 8-way shot shouldn’t help in that regard, and on top of that it’s really easy to lose it – either by getting hit or by taking more than 10 power-ups once you have the weapon. The truth is that it’s much more enjoyable to tinker with the other weapons, especially the field thunder and all the auxiliary kinds. Unfortunately the scoring scheme in GunHed is broken since it allows infinite milking in certain parts of the game (such as during the quick confrontation against the 4th midboss).

If scoring is bust, at least the player’s left with the fun of playing a very long Compile-meets-Hudson shooter. A plethora of extra lives can be amassed by scoring (20K, 50K, 100K, 200K and for every 200K afterwards), and if you can take enough blinking orbs clearing the game on one credit becomes a lot less frustrating (I remember the first time I played it, hopelessly hammering the final stage on checkpoints until I ran out of continues). While the sound design tries to impress by providing voice samples for the weapons you collect, some of the music is at least reasonably catchy. Extra difficulty levels are available by performing a trick during the start screen: hold SELECT and press buttons I and II together at the same time; do it again to see further difficulties (a turbo controller helps); get out of there by soft-resetting with SELECT + START.

I got the best result below after experimenting for a little while and beating the game a few times (Normal difficulty). No milking was done. In between credits I tried to get my nephews to also play the game when they got fed up with the PS3 one evening. :) 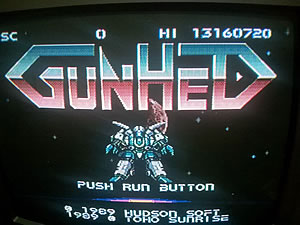