Down Load 2 is the sequel to the HuCard shooter Down Load, both exclusively released for the Japanese PC Engine by its in-house company NEC Avenue. This second game seems to be even more obscure than its predecessor, in part probably because it lacks the awkward cursing messages the first one came to be known for. However, Down Load 2 kinda makes up for that by concocting an out-of-bounds story that has Adolf Hitler’s brain being implanted in a doomsday organic creature that’s threatening to take over the world, complete with cut scenes that leave nothing to the player’s imagination.

Syd, the pilot of the cool hoverbike of the first chapter, returns to action when he’s woken up in the middle of the night by his friend Deva. This time he’s in control of a regular spaceship, projecting himself into a few cyber space environments throughout nine short stages set in extremely varied landscapes. The characters are the same, but the gameplay between both games couldn’t be more different. With the exception of the flying speed, everything else about Down Load 2 is more straightforward and results in an easier challenge that’s at least entertaining for its diversity and for the attempt at telling a story with extra dialogue and imagery. Of course for the dialogue you’re supposed to understand Japanese (to skip those long intermissions just press SELECT). 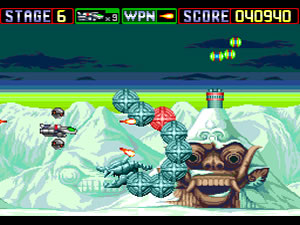 It is cold in the mountains

Worrying about weapon availability isn't needed in Down Load 2 since all four weapons are at your disposal at the press of button I, with which you're able to select between a vulcan pattern, a straight laser, a homing shot and a powerful close-range electrical field (firing is accomplished by pressing button II). It takes only two power-ups (P) to max out any weapon type, and the good news is that they're all useful in equal measure. Unlike in most shmups that have it, the homing shot in particular is extremely effective when maxed out throughout most of the game. I can use it exclusively in several stages without switching to any other weapon type, boss fights included.

A few other items are also very important in order to play the game more comfortably. Besides the obligatory speed-up (S) you can also take a red square-shaped icon that provides up to two side options that hover above and below the ship, block bullets and fire additional homing shots. The blue square-shaped icon grants a shield that can withstand a good number of hits, going from green (full shield) to orange (weak shield). Note: taking an extra red icon when you already have two options works as a smart bomb. Other items that might show up include extra lives (1UP) and two single icons that appear only once and are pretty much useless. The G in stage 7 should be avoided because it sends the ship flying at a ridiculous speed, whereas the E in stage 8 seems to have just a screen clearing effect. Unless I missed something, my opinion is that both G and E reek of leftovers from a rushed design process.

On visual merits, Down Load 2 is very keen on impressing the player with nice effects. No matter how obscure it is, this one is still capable of surprising even the most seasoned PC Engine gamer. Not only are the cut scenes considerably detailed and story-driven, but you also get an aggressive use of colors and some gorgeous parallax every now and then. Besides a few aspects inherited from the first chapter, it's possible to recognize influences from Forgotten Worlds (paintings on the walls coming to life, large bosses chasing you around the screen) and Rabio Lepus (the whole blueish cold design of the sixth stage). Influences aside, the game succesfully shows proper personality, if only for the bizarre use of Hitler's image. The music is rock-oriented and just correct, with no stand-out tracks in my opinion.

There's not much to say about the scoring system here. It's just too simple and rather messy, since some enemies and bosses do not result in any score at all. I couldn't identify any point of unlimited milking, and the little projectiles that can be exploited come from enemies that don't take long to go down or disappear too soon. By far the biggest addition to scoring comes from the extra P items you collect once the firepower is maxed out, since each one is worth 500 points. The higher you score the more chances you have at beating the game as well because for every 10.000 points achieved you win an extra life.

Unlimited continues and the possibility to stock lots of extra lives is what ultimately makes Down Load 2 an easy game. The default speed shouldn't be a problem as far as gameplay goes, and the art design surely makes for a fun little ride. With the exception of the lesser difficulty, arguing if the sequel is better or worse than the first Down Load is down to a matter of taste. They're just too different from each other after all.

If you want to have a record of your score after you beat the final boss remember to pause at once as soon as the boss goes down. There's almost no time to see the final score before the game enters the animation for the ending. I have successfully melted Hitler's brain and saved mankind, and my 1CC result is below. 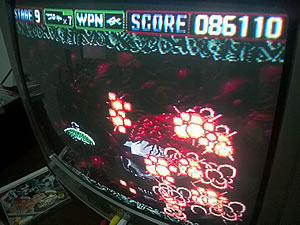