What can you say about video games where you control a giant robot fighting huge mechanical bosses? I’m not crazy about them but I certainly dig this particular departure from the norm every now and then. I do know people who absolutely love everything involving robots, especially those of Japanese origin such as the ones that appear in Gundam and Macross. It’s true that both series are also represented by a plethora of video games within the most diverse genres ever since video games were born, but what of other robot-based efforts that somehow have the same style?

Enter Kiaidan 00 for the PC Engine CD, a behemoth of 16-bit robot shooting with fancy, loud storytelling from start to finish. Foreigners could easily mistake it as a bastard entry in any Gundam series, given the amount of cut scenes, dialogue and character interactions that the brave hero must go through in order to defeat an army led by 14 evil beasts. The cheesy aspect of it all reminds me of stuff like Groizer X, and even if I understand nothing of Japanese I can still relate to the protagonist’s enthusiastic speeches as he enters the robot suit and navigates skies and outer space environments shooting down insect-like creatures, helicopters, jets, dragons, elephants, flying battleships, robots, dwarves, ninjas, warriors in chariots, etc.

If you’re one of those people who enjoy seeing everything the game can give you on story, take a seat and relax as the animated intro of Kiaidan 00 unfolds. And don’t bother prepping to sweat you fingers at that controller so soon after you hit START. You’ll still be seeing a lot before the actual shooting begins.

In the lower HUD everything you need at any moment is displayed, such as health bar, stage progression, weapon selection and boss energy. Button II shoots and button I cycles weapons between five types: forward gun, wave spread, rotating energy ball, fixed energy field and three-way lightning bolts. There are no power-ups or upgrades, therefore the sooner you get used to how each weapon works the better. However, this lack of upgrades is compensated by a powerful charge attack accessible by just refraining from shooting. When the charge bar is full press the fire button to unleash the attack, which takes the form of ~ in the same order of the weapon layout ~ a detachable punch, a rotating thin laser, an extended reach for the energy ball (the robot is locked in place though), a wider reach for the energy field and a thick vertical lightning discharge.

Establishing the atmosphere of old TV serials is something that Kiaidan 00 does with undeniable efficiency. From the colorful graphics to the pumping, sometimes eerie music of a few levels, everything in between evokes the feeling you’re immersed in one of those old cartoons. The scrolling takes the player flying over cities from afar and up close, between the clouds, across cold forests, inside cramped corridors where lava streams flow underneath, playing catch-up with a train protected by a ninja army and rocketing into outer space for the final showdown against the pair of final bosses. By the way, every stage comes with a mid-boss and a proper boss, varying from tiny people in cyborg suits to large mechanized aliens. They all have an assortment of predictable patterns for the most part, but the fights get more challenging as the game nears the end.

There are initially only three energy/health cells, meaning you can take three hits before the robot goes down in a burst of smoke and twisted metal (only to rise up again with a powerful shout when you say YES to the continue option). If you lose all health cells the character’s face starts glowing red, with the next blow causing a GAME OVER. Small green spheres scattered throughout the game replenish one cell, but I suggest not counting on them during later stages. The good news is that the health bar is fully restored at the start of the level. Activating the other bits of the energy bar is possible and directly related to scoring: for every million points achieved you activate an extra cell. 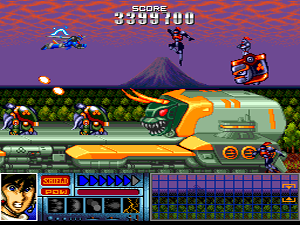 I'm on the ninja train!

At times Kiaidan 00 feels unnecessarily stretched out, not because the game is actually long but probably because some of the levels incur in repetitive cannon fodder. At least each stage has its own set of enemies, which don’t appear again in any other area of the game. Overwhelming flocks are the most dangerous hazard you might face, that’s why getting used to all weapons and trusting the power of the charge attacks makes a whole lot of difference for survival. I mainly used the forward gun, the 3-way lightning and the energy field, with a little help from the rotating orb in selected spots.

Although very simple, the scoring system is heavily unbalanced towards the energy field weapon. Getting higher numbers depends exclusively on how often you use it during boss fights. Just touch them for a moment and watch as the score counter increases at a much faster rate than if you were using any other weapon. This can be exploited during the whole fight, including the period after you have depleted the boss’s energy – when the game is merely waiting for you to throw the final blow with any charge attack (to which you’re treated with a corresponding animation during the level transition in the case of a stage boss). The wait time after the boss runs out of health isn’t too long and the boss will go down even if you don’t do anything. A midboss is worth 50.000 points when killed whereas bosses yield 100.000 points, but the amount of points you can get from exploiting them with the energy field weapon far outnumbers those figures.

Of course the above scoring technique comes with a risk-reward ratio that must be carefully dealt with, otherwise you might lose the credit for sheer greed. Some bosses are easier to milk, others not so much, such as those who tend to move erratically around the screen. I had more fun with the game once I started to squeeze more points from them.

Among the robot-themed horizontal shooters, Kiaidan 00 is unique because you don’t see the robot’s avatar in the usual profile we’re used to (standing, side view). Bullet count is considerably low, to which there’s a workaround if the player thinks there should be more of them: just go to the options and move the difficulty selector up. With each step the game will throw an increasing number of suicide bullets! The options screen is also supposed to show the highest score in each difficulty, but this function is bugged and doesn’t work well all the time. To get a record of a 1CC result it’s best to pause the game as soon as you defeat the final boss, as in the picture below (I played on Normal / 0). 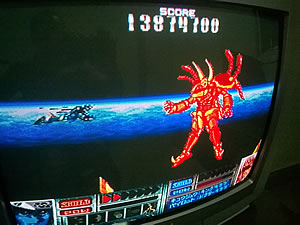