Jets, spaceships, nuclear-propelled saucer-shaped rockets? These are all too much of a cliché in those tiring, intergalactic adventures you play in your everyday shmup routine. Their missions would be nothing without the efforts of the brave people who strive to maintain justice at ground level, battling all sorts of fiends and beasts that emerge from desolate castles and polluted soils.

Jokes aside, no matter how predominant the archetypical shmup avatar/vessel is, there will always be room and faithful devotees for the pedestrian type of shooter. Like Elemental Master, for instance, a vertical take on the formula presented by Technosoft's own Thunder Force III.

Elemental Master is a fantasy shooter with outstanding atmosphere, one that aesthetically rivals titles with similar themes such as Jewel Master, Castlevania, Dragon Spirit and Undeadline. Being a pedestrian shooter, with the latter it shares many gameplay traits except for challenge, an aspect that instead mirrors the characteristics of Thunder Force III. So provided you don’t expect an enduring time with it, chances are you’ll have good fun with the adventure of a wizard warrior who must fight his own wicked brother to free a magical world from the clutches of evil. Graphics are top notch and the soundtrack is as great as in any other 16-bit Technosoft product. 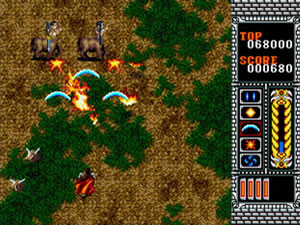 As seen in the dramatic intro to the game, our hero is at the core of a family tragedy, but in his quest for justice he’ll acquire additional elemental powers as each of the initial four stages is completed. It’s possible to select their order: there’s a fiery stage where lava flows through cracks on the ground, a ravine level with monsters throwing rocks at you, a windy forest and a desolate swamp filled with treacherous lagoons. Once all of them are beaten you’ll have completed your arsenal, which besides the basic straight gun will also consist of a three-way shot (fire), a wave pattern (wind), a powerful fire blast (earth) and an ice weapon that fires crawling projectiles on the sides (water). Weapons gained are only lost when the game is over, and once at least two are available button C is used to cycle through them.

In a bi-directional mechanic that adds a welcome diversity to the game, button A shoots down and button B shoots up. Plain shooting won’t be your only resource though, since with each press of either A or B you only get a short stream of fire. By holding down the button firing stops soon and you start charging the selected weapon for a more powerful blast upon release. Even though the scheme for regular/charged shot might be a bit weird, it actually works quite well considering that all forms of the charge shot are useful. And you don’t need to mash the buttons to achieve a continuous firing rate, all you need to do is tap them at short regular intervals.

When you start the game the default weapon is the only one that has no charging capability, but thanks to the sacrifice of the curvy fairy that aids you in the first half of the journey you’ll be able to use its charge blast as soon as you beat stage 5. This new charge shot is actually the only weapon that can damage the female spider-boss in stage 6, as hinted by the fairy herself before she disappears. All bosses return for revenge in the last level, a long stride inside a castle full of huge flails and moving spikes, as well as several lines of unspeakable creatures such as mummies, golems and gargoyles.

Expanding the initial health meter is accomplished by finding and taking a trophy item (each one creates an extra slot in the health bar). Other items to be uncovered from inside golden chests consist of health refill for 2 slots, a shield that absorbs three hits of damage and a magic mirror that creates three trailing shadows and provide additional firepower – this last one will be lost as soon as you get hit and lose health. There's no harm in touching walls, but you do lose health when you get crushed by the scrolling effect.

Although it’s hard not to get sucked into the awesome art design of Elemental Master, it’s also hard not to be disappointed by the game’s low challenge level. Enemy bullets are few and far between, with enemies themselves and environmental hazards being the main source of danger. Even when you press A + START to access the options and bump the difficulty up Expert (Very Hard), the stakes aren't that high for a 16-bit shooter. Aiming for higher scores is very simple: just kill everything you see, milk the few possible projectiles available (such as the fire snakes conjured by the floating wizards) and collect all icons since they’re all worth something (plus none of them affects gameplay in a negative way).

When you see what other developers were able to do with the Mega Drive later on, as in Twinkle Tale (especially the boss fights, which are very reminiscent of the boss fights from Elemental Master), I wonder what we’d receive as a sequel had Technosoft decided to revisit the world of this shooter. Would they be able to up their game just like Thunder Force IV did over Thunder Force III? We’ll never know.

As I tried to squeeze the maximum points I could from the game, I started all my credits in the forest stage in order to get the fire weapon and abuse its charge shot and piercing ability. My best result is the one below, playing on Normal. Note: in my opinion this is one of those rare cases where the US box artwork is superior to its Japanese counterpart. 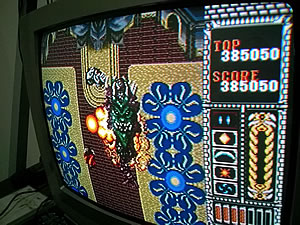