The Messerschmitt Bf-109 is a German World War II fighter aircraft designed by Willy Messerschmitt and Robert Lusser during the early to mid-1930s. “Bf” stands for Bayerische Flugzeugwerke, a code issued by the German ministry of aviation to represent the company that originally gave birth to it. Powered by a liquid-cooled inverted-V12 aero engine, it was one of the first truly modern fighters of the era since it included such features as all-metal monocoque construction, a closed canopy and retractable landing gear (source: wikipedia).

Despite its extensive use by the German Luftwaffe prior to and during the Second World War, a more obscure part of the Bf-109 history lies in its participation as one of the six allied planes that took over the mission to fight an alien menace that threatened to destroy the Earth, soon after the war ended. However, you won’t find anything about this hidden piece of military history in libraries or encyclopedias. In order to know about it and actually experience the excitement of shooting down evil alien scum you need to play Strikers 1945.

As all shmup fans know (or should know), this sprite-based war document was unveiled by Japanese company Psikyo across several different gaming platforms in 1995/96. The reason why I’m focusing on the Bf-109, which is actually the only German plane in the game, is that I decided to pilot it while savoring the Playstation version (I had previously used the British Supermarine Spitfire when I tried the Saturn port).

A drastic change in artillery is of course expected when a sci-fi theme is added to a military-based shooter. Therefore, all six planes in Strikers 1945 received an upgrade in their firepower that allows them to shoot unlimited ammo (rapid shot), execute unlimited charge shots (shot) and drop limited powerful bombs over the enemy. Their speed, charging time and weapons effectiveness vary, so choosing the plane that best fits your shmup sensitivities is quite important. Differently colored (often in red) and other specific enemies release power-up items and extra bombs. Bombs are self-explanatory, whereas each power-up adds an option whose behavior depends on the plane selected. A maximum of six bombs can be carried at any time, and by collecting four power-ups you achieve a maxed-out aircraft. Surplus items are then converted into extra points.

It’s important to note that options behave differently when you’re just shooting, but at least for me what also determines the choice of plane is the charge shot. In the case of the Bf-109, for example, the available options are grouped together and dropped in place, slowly advancing forwards while shooting a powerful bullet stream. This behavior leads to several possible approaches if you want to deal with stronger enemies while focusing in other areas of the screen or if you just want to quickly dispatch an incoming threat – just remember that you’ll be without options alongside the plane for as long as the charge attack lasts. The Spitfire charge shot, on the other hand, works as a net of extra firepower that forms in front of the plane and moves around with it, an aspect that requires totally different strategies than those of the Bf-109.

Weaker aspects of the Bf-109’s arsenal are its slightly longer charging time and the efficiency of its bomb, which almost exclusively serves as a panic function since it inflicts no real damage on enemies unless you’re pretty close to them.

Regardless of plane choice, players must learn how to deal with rank in Strikers 1945. Basically, the more powered-up you are and the longer you survive the faster enemy bullets will be. To make matters worse, all stages in the first half of the game are randomized, which means you might have to deal with the same stage in its easiest state (1st level) or at its toughest (4th level). One way to deal with rank is to let yourself collide against an enemy, which makes you lose an option and immediately slows down enemy bullets. Given the way bullet spreads are implemented in this game – often in concentrated quick bursts that demand some prior positioning and tap-dodges to be evaded – lowering rank in key areas can definitely be considered a valid gameplay resource. 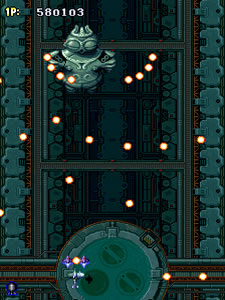 One of the three random mid-bosses in stage 7

The last main aspect of the gameplay is related to the gold bars released by ground enemies. Their glow varies at a predetermined rate, and to get the best bonus out of them they need to be collected at their maximum glow. Each gold bar is then worth 2.000 points, which is connected to a sound effect that differentiates it from when you take them at lower glowing points (200, 500 and 1.000 points). Naturally the further you advance into the game the harder it becomes to time gold bar collecting for best results, but overall it’s a fun gimmick that works and kinda offsets a bad order for the first four stages. Never mind the slaughter that takes over the whole second loop, where difficulty is amplified to crazy heights and makes survival absolutely more important than gold bar collecting. The only extend comes with 600.000 points.

If visual and audio merits aren’t that great in Strikers 1945, at least the particular style that Psikyo worked to maintain after branching off from Video System tends to grow on you with repeated plays. The Playstation port suffers from very rare faint stutters of slowdown but this isn’t nearly as bad as some online sources point out, and is virtually identical to the disc released for the Sega Saturn at around the same time. The Japanese Playstation game comes with three resolution modes: Original 1 (YOKO), Original 2 (wobbling YOKO) and Arcade (TATE). Plane profiles, configurable controls and a manual save/load function complete the package. Beware of the release for the PS1 in North America, even though it's named Strikers 1945 it's actually the sequel Strikers 1945 II with no TATE mode included.

Since I benefited from a short burst of MAME practice during week 3 of the shmups forum STGT 2015, it can be said that I started playing this version with a good amount of previous Bf-109 knowledge. In my second sitting I got the high score below on Normal (difficulty 5), reaching stage 2-2 for the first time ever. 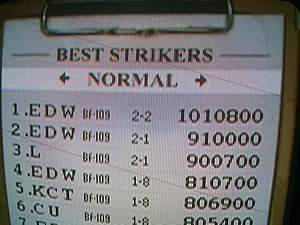