Rarely do I watch cartoons these days. Or animes. However, as I mentioned before some of the TV time in my childhood was spent on Japanese cartoon serials like Groizer X, which was notably the most famous one around here. And even though these kinds of cartoons are no more, we can still quench our nostalgia on video games with a real retro feel such as Supercharged Robot VULKAISER, a cheap and quick outing from Astro Port that embodies a lot of what made these shows so entertaining. Therefore nostalgic buffs take note if you're game for an undemanding passtime.

Supercharged Robot VULKAISER is as bare-bones as it gets, but it comes with a few stills where that fine Japanese anime art of the 1970s jumps off the screen thanks to characters standing in bold positions, their mouths opened as if they're about to shout a war cry. Of course their mission is to protect the Earth from the evil alien scum of the week, but who actually cares about that these days besides kids? The Steam version is so simple that it lacks any options for button mapping or even a pause function (ah, the desire to function as an arcade title!). Just launch the game and watch as it automatically recognizes your current control scheme - my Xbox controller worked perfectly with it, even allowing me to use the D-pad instead of that shitty analog stick.

Players pilot the Vulkaiser, a giant robot that's supposed to restore peace to the Earth and "combines" with four different types of VulFighter enhancing crafts, each one controlled by a different character. Practically you just use one button through the entire game, since any other button in the controller activates the Ω weapon, a bomb that's specific to each VulFighter, is capable of melting enemy bullets and can only be triggered once for every new craft you combine with. An assortment of VulFighters appears twice in every level so that you can switch your current one for another if desired. These can be:

The act of firing your weapon automatically fills up a charge gauge, and to release the charge shot all you need to do is refrain from shooting from a second. It's a mechanic that works really well, and essentially all you need to do is wait for the graphical/sound cue to release successive charge shots. Charge times and overall weapon effectiveness varies between characters, but the most difficult one to use is definitely the Drill Kaiser, mainly due to the way its charge shot works. It's important to notice that there are different health bars for the Vulkaiser and the selected VulFighter, and that depleting any of them is a definitive loss (in the case of Vulkaiser it's GAME OVER, and for VulFighters you just can't use the lost one anymore). Losing a VulFighter sends the Vulkaiser back to its default condition, including the charge shot that results in the robot's fists being detached in a frontal attack. Pay attention to the hit spot in the character's chest, as pointed out as soon as you start a credit.

When I played this game I remembered a lot of Kiaidan 00. Both titles share the same cool avatar orientation, but Supercharged Robot VULKAISER boasts a less cheap and more straightforward scoring system. There's a simple multiplier scheme that's directly related to how fast you kill successive enemies, which makes Needle Kaiser my favorite VulFighter. At the end of every level all health gauges are converted into bonus points, while speed-killing bosses also grants a chunky amount of extra score. Every time a boss fight starts a counter starts coming down from 99, with the kill tag being multiplied by ×10.000. 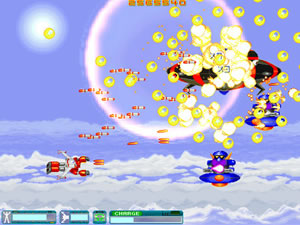 Lighthearted and approachable, VULKAISER does not veer away from the staples of a quickly developed game. Earth stages have backgrounds with cities, forest landscapes and clouds. No obstacles or walls are to be expected. There are lots of enemies and battleships riddled with turrets and little mechas flying around, with the design highlights reserved for bosses. They usually morph into giant robots after being defeated in their rocket or spacecraft forms. Brief comedic dialogue snippets develop the story in the levels themselves, whereas the current VulFighter pilot gives a longer speech at the end of the stage. Using the same VulFighter in multiple levels actually makes the bond between characters stronger, with only one drawback in the gameplay: the more you stick to the same VulFighter the harder the game becomes. Pick a different one to lower the rank.

A last note about rank is that ramming attacks and enemy missiles drain more health from Vulkaiser. Then the most damage comes from red, purple and blue bullets, that's why sometimes the energy you lose when you get hit seems to vary. A fully customizable training option exists, and checking how you're performing is easy because the game saves replays for your best scores automatically across the four difficulty levels. On a last note, Supercharged Robot VULKAISER adopts a 4×3 aspect ratio, so it doesn't fill the whole space in a widescreen setup.

My best 1CC result on Normal is below, mainly having as co-pilot the lovely Kimiko, master of the Needle Kaiser. Click here if you want to know a bit more about the characters.