Before shoving the FM Towns Marty back into the box I figured it was a good time to resume exploring the contents of Excellent 10, the compilation released by Amorphous with games exclusively developed with their shmup-making tool Shooting Towns. And true to my initial resolution when I played Beams, the chosen title had to be the next one in alphabetical order.

Even though it shares a lot of aspects with Beams – mainly the poor graphics, the absence of autofire and most of the music – Brenner is of a different breed. With only four levels it barely justifies being called a complete game, yet it doesn't come off as a complete pushover. Difficulty in this case is directly related to the fact that you need to mash button A to survive, and also because Brenner does not hold your hand by granting excessive extends. All you get is an extra life for each defeated boss. 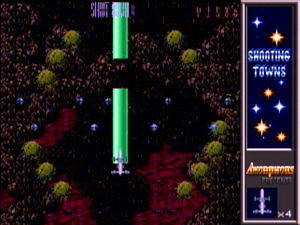 First of all, we need to make it clear that this is an 8-bit standard game. There's nothing here that could not be done with the same or even better results in an NES, for example, and that seriously hurts the reputation of a 32-bit video game/computer system. Back then it must have been thrilling to finally be able to design your own shmup, but I have already learned that you shouldn't get your hopes up on this system's technical prowess when it comes down to the games developed with the Shooting Towns tool.

That said, Brenner at least delivers something more palatable than Beams. As a simple game that follows a classic mold, players just need to adopt a methodical approach in order to deal with the obstacles and the lack of autofire. Most of the time that weird spaceship that looks like a racing car feels underpowered, especially after dying. The good news is that everything has a fixed behavior and there are no aimed shots at the player, so regardless of how many enemy bullets or fireballs cruise the screen they will always follow the same routine, as will the power-ups released by them. That's the saving grace in a game where button mashing is such a necessity.

The default pea shot can be changed into other weapons according to their respective icons: 2-way (forward + rear shot), 3-way spread, 4-way cross shot, a combination of 3-way and 4-way (best weapon in the game) and the laser (inexplicably the only one with autofire). I don't know what those guys in Team Fiat (the only "developer" in the compilation with a non-Japanese name) were thinking, but the single weapon with native autofire only appears in the second stage. There are no upgrades at all and no advantage is seen by taking successive items of the same type, be it for survival or scoring. Speaking of which, I believe the most difficult part of the plain scoring system is actually reading your score. All fonts in the game are so small they might strain some people's eyes.


From the beginning to the end of Brenner

Although simple, Brenner tries to show a little variety throughout. It starts very outer-spacey, making you fly through a meteor shower and fireballs before facing a series of turrets prior to the boss, then it slowly shifts to a biological theme. In the third stage you'll be surrounded by spores, amoebas and breakable caterpillars. If only the bosses had some minimally interesting design... But no, they're all huge wrecks that bounce around the screen in repetitive patterns. Don't try to move too far up when going around them, the game cuts you off a good stretch before you're able to reach the top of the play area. The final level has no enemies, only a brief escape sequence inspired by the Salamander games.

Note: do not press START once you lose all lives or you'll come back to the start screen. Continues are unlimited but you should always press buttons A or B to restart the level. In order to get back to the OS screen to select a different game you need to reset the console. Whenever you boot one of the games in Excellent 10 on the FM Towns Marty you're given the chance to select between under scan (31,47 kHz) or over scan (15,73 kHz) displays.

My final score for Brenner is below. I managed to beat it on a single life. 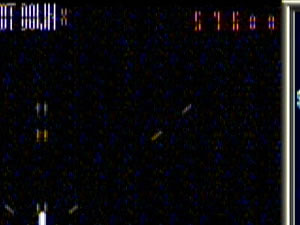