In the Hunt (Saturn)

In a post-apocalyptic world flooded by an evil force called Dark Anarchy Society (DAS), the only hope for the thriving humans is a special submarine designed to crush the enemy's ultimate weapon. The journey takes place throughout six stages of exquisitely crafted graphics, in a colorful mayhem that sees the player battling all sorts of creatures and military gear. It's a peculiar shooter that plays like nothing else, and also quite unique within Irem's library. Due to its aesthetical similarities with the Metal Slug games, which came later and were designed by practically the same team, In the Hunt could even be mistaken as a Neo Geo product.

In the Hunt (Kaitei Daisensou in Japanese) is indeed a special game among its shmup peers, as I mentioned above, mainly because of its flow. The gameplay is extremely methodical, less frantic and completely open to the pace dictated by the player since it uses a push-scroll scheme. The emphasis is in hazard management, not dodging bullets (dodging is still there, but in minimal doses and only in the last couple of levels). Abusive lethargy is avoided by a huge timer that blows the sub to shreds (no more oxygen?) once it reaches zero, which in turn inhibits infinite milking. Speaking of lethargy and coming from games that moved a lot faster, I was negatively struck when trying out this Saturn port. It feels even slower than the Playstation version I beat a while ago, but after a couple of credits the game won me over again so I decided to play it to the end.

The only problem of the Saturn port for In the Hunt, at least the US longbox variation, is that it comes with a few changes and scoring glitches. Though these are not of the gamebreaking kind, they certainly make it ineligible for comparisons with other versions of the game. 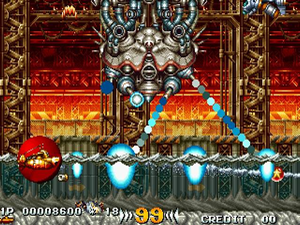 Coming back from death against the second boss

Our chubby submarine can fire torpedoes with button A, drop mines with button B and perform both actions with button C, the only input with native autofire. Torpedo types are switched by collecting the corresponding power-up that cycles colors: impact torpedoes (red/default), supersonic torpedoes (blue) and exploding torpedoes (green). There are also two types of mines, which differ in the way the auxiliary weaponry is fired towards the surface: floating mines when submerged and machinegun at surface level (A) or missiles when submerged + homing missiles at surface level (M). Each weapon can be powered up three times by sticking to the same color/letter.

Besides power-ups, players can also collect treasure balls with stars in them. Star count is displayed to the sides of the timer and contributes with one extra life for every 100 star points collected. Small stars are worth 1 point, big stars are worth 5 points, and in every serious credit it's possible to get at least two extra lives by taking treasure balls. Additionally, you should also know that each surplus item when you're at a maxed-out condition will also add 1 star point to this counter.

In the Hunt can be many things, except hectic. Most of the time haste leads to stupid deaths, so no matter what lies ahead caution is always the best alternative. Don't rush to get that item, don't move too far at the risk of being overwhelmed by more than what you can deal with. Wait and only then move. The abusive slowdown can be a pain and almost seems to bring the game to a halt at times (during the fight against the 5th boss, for instance), but eventually you learn to live with it. There is, however, an inexplicable change that required an adjustment to my previous approach in the gameplay: the clusters of the exploding torpedo (green type) are arranged horizontally instead of vertically, which drastically alters is function when compared to the arcade original or the Playstation version. Why the heck did this happen, I wonder?

Besides the unnecessary change to the green torpedo, this port also doesn't seem to have the same scoring rules as other versions. Overall you seem to score less for killing the same waves/enemies, and there's a bug that happens every time you keep the firing button pressed in between levels: if you do this the score you should get by destroying the boss is not computed at all! And no matter how I dismantled the forms of the last boss, sometimes I just scored nothing during the fight. As much as I tried to figure out what was going on I couldn't do it, it's just that messed up so eventually I gave up.

Of course the alterations mentioned above do not take away from the fact that this is still a fun shooter. Each stage has its own particular setting and feel, with highlights being the harbor entry at the second stage (which screams of Metal Slug), the escape from a stone monster that needs to be bombarded with falling rocks to be defeated in stage 3 and the epic final level and its sequence of indestructible giant torpedoes that force you to open tiny gaps between them in order to proceed. The difficulty picks up in the final stretch of the game, which certainly has a good dose of epicness to it, so that kinda balances out the sluggishness that might scare some players away. For those who care, the soundtrack is remixed and there's an additional animated opening in this port.

Once I got the clear I lost interest in improving my score simply because I got no points whatsoever from beating the last boss, as you can see in the picture below. The game was played on Normal difficulty. 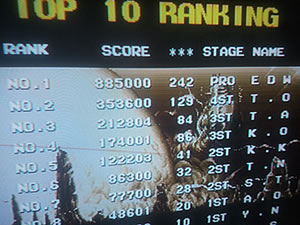 Interesting note about DAS, the recurring villainous force from Irem's arcade games that appears as main antagonist in In The Hunt, Geo Storm and Undercover Cops: this source says that if In the Hunt is beaten in 2-player mode both players will then fight each other for the final control over DAS. Now that's a cool objective to have if a friend decides to play the game with me!
Posted by Edward at 12:37 PM