With the inevitable arrival of the 16-bit generation, by 1991 the Famicom wasn't as important as before in the video game scene. Even though Konami was obviously moving forward with the development of new 16-bit titles, the company was still brave enough to deliver a late testament to the wonders of the NES hardware in the form of Crisis Force. Unfortunately the game was never released out of Japan, most probably because it used special cartridge components that would certainly require more work than usual in the porting process (a fate that also hit more famous titles such as Gradius II). One of the direct results of such fate is that since I've started collecting video games Crisis Force has always been a rather expensive cartridge.

First of all, it's okay to believe the hype when you hear people talking about how impressive this game is. In a sense, it's as if Konami had brought to the NES many of the effects and gameplay traits seen in 16-bit titles only, such as the densely layered parallax scrolling of some levels. And even if there isn't any explicit or official info in the credits, there is undeniable suspicion of Compile having worked on Crisis Force given how it sometimes feels like a Compile-developed title. A mercenary job from the competition or just pure homage? I can't be sure, but when it comes down to the game itself it certainly has everything you'd expect from a rock-solid 8-bit shmup: graphics, music, challenge and great fun factor.

The fate of the world rests on the shoulders of Asuka and Maya (Easy diff.)
(courtesy of YouTube user ShiryuGL)

One of the aspects that make Crisis Force such an accomplishment is the clever way the NES controller is used, after all you can do a lot with just two buttons. Button B fires and button A can either work as a form switch or as a bomb. Whenever you're firing and button I is pushed a bomb is detonated, whereas a press of button I when you're not shooting will switch the ship's sprites to one of three forms: there's the default forward shot pattern, a secondary form that also shoots backwards and a third one which emphasizes lateral forepower. All forms also have two variations of each weapon dictated by the color of the power-ups you come across: blue endows the ship with even faster firing rates, red results in more powerful and intelligent shots (with wider reach, rotating shields or homing abilities). Blue and red power-ups are the only ones that cycle, and between each other only.

Each weapon can be upgraded three times by sticking to the same power-up. Upon getting hit the ship reverts back to its default status, and any shot taken at this condition means you'll lose a life. Regardless of how powered-up you are, a special badge-shaped item can be taken and stocked, and whenever 5 of them are collected the ship changes into a special form with timed duration and its own dedicated laser pattern. Further badges collected while in this form serve to extend it, getting hit shortens it and when the time is over the ship reverts back to its normal state (in co-op mode the special form combines both players into one ship where player one controls firepower and player 2 controls movement).

Other items players will come across are speed-ups (blue S), speed-downs (red S) and extra bombs (B). For my experience the ship never gets too fast, so I'll always take all speed-ups that come my way. Who knows, maybe they are actually worth something? And why do I ask this? Well, Konami seems to have sacrificed something in order to make Crisis Force such an astonishing game when in motion, after all the only functional info you can see during stages are your lives and the amount of bombs you're carrying. I's only possible to have a glimpse of your score in-between levels or in the GAME OVER screen, which means that during a full credit the last you'll be able to see of your score is the one that's displayed briefly once the 6th boss is defeated. The opening to Crisis Force is straight to the point and shows twin siblings waking up to their true legacy after Tokyo is bombarbed by an alien fleet. You'll see them again if you manage to overcome seven areas filled with enemies and guarded by bosses that tend to be large and move all over the screen. Even though there are opportunities for milking I couldn't find any spot where it'd be possible to safely break the game, so eventually all enemies will perish. Ancient grounds compose a good chunk of the gameplay with Egyptian motifs in more than one level, as well as volcanoes and a sci-fi touch that reaches its peak in the boss rush of the final stage. Each weapon/ship can be handy in several parts of the game, even though the weapons fired by the default ship are the most powerful ones. Nevertheless it's very important to always get a power-up upon getting hit and not be greedy with bombs, especially in areas where enemies tend to enter the screen attacking with no prior warning.

Speaking of bombs, it's also important to mention that every ship form has a specific bomb animation. For the straight shot we get a round blast that expands outwards, the rear shot blows up a hole that sucks everything around it and the side shot sees the ship disintegrating and reintegrating again while being invincible. The best one in my opinion is the round blast, even if it doesn't come with invincibility. By the way, abusing the invincibility window that comes with the ship's special form is a safe way to deal with tricky passages, at least while you're learning them. Aggression and brute force is always the best alternative if you know what lies ahead. From what I could notice extends are granted with 50, 100 and 200 thousand points with another probable one at 400K.

If there's one thing that's technically below other aspects of the game is the soundtrack. It's a good one, but there's repetition of BGMs and none of them is actually mind blowing. It's interesting to note though that the boss theme seems to have been honored with a new rendition in the amazing Judgement Silversword, which in some ways is a successor to the 8-bit tour de force presented in Crisis Force.

The picture below shows my score right after I beat the 6th boss on my way to a 1CC on Normal difficulty. It's most likely the worst photo I have ever taken in the history of this blog because is was daytime and my cell phone hasn't been in its best shape for weeks now. In any case it should read 325.300, and that's my goodbye to this excellent little shooter. 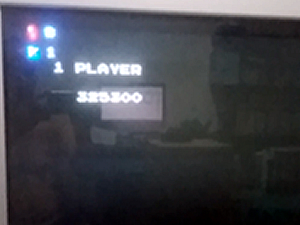