The horrors of a gaming library are usually a chapter of their own for collectors. Case in question: Search & Destroy for the Playstation 2. Why in hell would anyone put money and effort in products like these, that seem to have been developed to mock both Sony and gamers alike?

If there's anything redeeming about dealing with such crap is that the history surrounding some of the most infamous publishing companies lives on through our channels, like purulent spores spiking out of sick tissue. Leave it to us, masochistic players, to show everyone the way of the crap and help you avoid it, lest one of the products by Phoenix Games ends up falling onto people's laps.

It was a hot afternoon and I was stuck to a bureaucratic task in my room. I needed to vent some air but was too tired to invest my focus on anything minimally demanding, and there were so many boxes piling up everywhere that the only part of my shelves that I could reach was the PS2 section. So Search & Destroy it was. More Phoenix Games. However, having gone through Guerrilla Strike before, this time around I was prepared for whatever hid within that blue European case, asinine gameplay and boredom included.

The year is 2050 AD. Two groups are fighting for an artifact. Your group is teleported into the enemy camp to capture the artifact. The mission is completed, but you are the only survivor. Your goal is to get out of there alive. Soon after this briefing is shown your helicopter is dropped over cloudy green pastures and the ordeal begins. Players have only one input at their disposal, which is button ×. The first stage drags and seems to last forever while uninspired waves of aerial enemies cross your path, but every once in a while some of the destroyed enemies will randomly leave behind an item for immediate pick-up.

Items can be either a power-up, a shield, an energy refill or an extra life. Power-ups are responsible for upgrading your firepower until you acquire a neat mix of fixed + bending homing shots when maxed out. The shield adds a 6-hit additional protection even though it also increases the already enormous hitbox of the helicopter. Finally, energy refills recover 40% of the vertical lifebar while extra lives can be stocked up to a maximum of 5.

Saying that Search & Destroy is boring is an understatement. Prepare to face fifteen long levels flying over farms, deserts, mountains/ravines and industrial landscapes whose texture seems to have been borrowed from those Magic Eye books (the single exception to that is an ice stage that appears only once). As for the enemy gallery, it's a sorry joke simply rearranged stage after stage. For example, those lonely tanks you see on ground level every now and then are just for show. Since the programmer apparently forgot to activate them, only aerial enemies are to be seen throughout the whole game as you listen to unremarkable music and sound effects that are often way too loud.

Search & Destroy is also very easy when you're fully powered up, yet dying in later stages leaves you quite underpowered, terminating the credit fast if you're not familiar with the enemy spawning routine. And since collisions are the only thing that can kill you or deplete the shield instantly, there is always one type of enemy per level that likes to enter the screen at a higher speed, thus offering some sort of actual peril to the player. 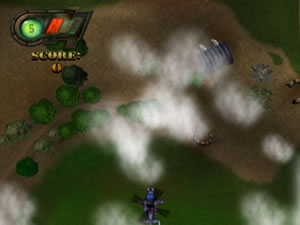 Get out of there alive!

Amidst all the mediocrity of the package, if we look closely to isolated aspects of the game it's possible to notice a few decent touches that could result in something at least less inane, had the developer tried to go beyond the trivial. The fully powered shot, for instance, has a rather satisfying animation. The zoom-out effect that's generously applied in co-op play could also have been used all over the place in a solo credit, and not only prior to those bosses at the end of stages 5, 10 and 15. Having more ice stages would also help marginally, as well as having the basic staple of one boss per level.

We don't even get a proper opening or title screen at the start of Search & Destroy, just an access for co-op play and the options, which allow you to adjust audio volume and activate autosave/vibration if desired. I searched and I destroyed in between lots of pauses to resume work and have some sips of soda. Here's my final 1CC result: 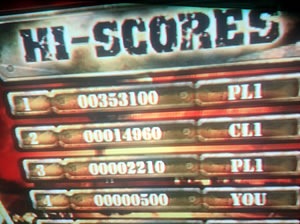