And here we have it. Thunder Force IV. One of the defining moments of the shmup genre during the 16-bit glory days.

I've been replaying the game on and off for a while now, savoring all those spiky corners of the wide open stages presented by Technosoft. Let's be honest, the company had a huge responsibility at hand back then, for surpassing the technical and critical success of Thunder Force III wasn't an easy task at all. And having lived my youth through those days, at the height of the 16-bit console wars, I can definitely vouch for the incredible anticipation created on its release. Nintendo lovers had Axelay, but Segaphiles had Thunder Force IV. As fans we did clash from time to time, but all in the name of healthy gaming. Oh how I miss those days!

In essence, Thunder Force IV amplifies everything about its predecessor. It's more ambitious in graphics, in music, in challenge, in scope, and by doing so it pushes the Mega Drive hardware to its limits. It's a beautiful game to look at either in motion or in screenshots, oozing with effects and diversity while offering an exhilarating, often over-the-top experience. Precisely because there's so much going on we get several moments of slowdown, the only real draw when comparing this entry to previous Mega Drive chapters. Fortunately it's the intelligent kind of slowdown, the one without any frame-skipping or jerkiness, which actually helps to tame the challenge during the busiest moments of the game. Nevertheless if you want to get rid of the slowdown without overclocking the console you can always go to the port released years later for the Sega Saturn in the Thunder Force Gold Pack 2 compilation. 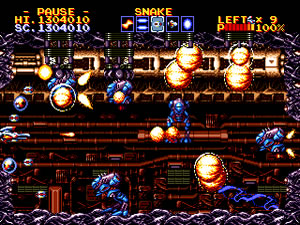 Following one of the most amazing openings of all time, which sees the Rynex-R ship flying through the huge moving titles, Thunder Force IV kicks off by allowing players to choose the order of the first four levels (since it's so badass I always go for Strite first). The basic gameplay of Thunder Force III is preserved so you do everything with only three controller inputs: shot, speed selection and weapon selection (B, A and C in the default configuration). Just like before there are five weapons to choose from, but only the twin shot and the back shot are available at the start. They're also the only weapons you don't lose when you die using them. Weapon/power-ups available for pick-up consist of B (blade, upgrade for the twin shot), R (rail gun, upgrade for the back shot), S (snake), F (freeway) and H (hunter). Other obligatory items are the claw (adds two rotating satellites that enhance your firepower), the shield (can withstand three hits, turns red when all that remains is the last hit) and the extra life (a small ship that can also be hidden in tricky areas or must be shot at to appear).

All changes applied to the series beyond the weapon scheme add to the flexibility of the gameplay and the epicness of the story. Most stages now span more than a single screen, demanding multiple playthroughs so that you can explore everything. Each level is also a challenge in itself, with very strong motifs and great momentum build-up. Resource management is still the best way to conquer the game, with good balance between weapons and real need to tinker with the main speed settings especially when weaving through some of the maze-like corridors. Speed can even be adjusted in unit steps, just keep the speed selection button pressed and watch!

What I mentioned above could certainly be enough for people to name Thunder Force IV as the best shmup of the 16-bit generation, but another aspect that stands out is definitely presentation. The awesomeness of the opening titles are just the tip of the iceberg, which is then followed by several moments of cinematic grandeur. For example, a few massive enemies appear in key moments of the game, such as the alien battlecruiser that houses Strite's boss Gargoylediver and bridges the two halves of the journey in stage 5, as well as the invincible robot that takes on the role of harbinger of fate when that ship goes down in flames. Parallax galore, fluid transitions between levels, turrets firing into the screen in the Air Raid stage, high speed scrambles, they're all neat and cool but the wildest bit is reserved for the end of stage 5, when the ship receives a "mohawk" add-on that allows players to trigger the almighty thunder sword, the ultimate weapon in the game.

Using the thunder sword is pretty simple, but you need to have at least the rotating satellitles provided by the claw (which also receive a make-over at the end of stage 5). When you stop shooting the satellites will glow with energy, discharging a potent sword-shaped beam at the press of the fire button. In fact, the thunder sword is so powerful that it pushes the ship backwards a little bit, an aftereffect that can kill you if you're too close to a wall. Using the thunder sword wisely is key to dispatching enemies and bosses faster and more elegantly. Just note that there are two charge levels, with the quicker charge resulting in a shorter reach.

Bosses in Thunder Force IV are able to put up a good fight, and even some mid-bosses have what it takes to keep you on your toes. Most of them are quite creative, menacing or just plain stubborn, frequently equipped with multi-jointed limbs. One of the highlights is the insect lair of the 8th stage, which is preceded by a rather tortuous path and a series of insidious mid-bosses. The whole soundtrack is remarkable, but the music in this particular level has got to be one of the most memorable of all times in the shmup genre. If I haven't done it yet I always crank up the volume when I get there.

The inherent awesomeness evoked at all corners of the game is obvious, but I admit the gameplay requires some getting used to at times due to issues often related to bullet visibility. Regular ones tend to be shiny and can get foreshadowed by explosions or be confused with backgrounds, while stage 9 has these sonic-like projectiles fired by the mid-boss that are a bit tricky to spot due to some weird color choices. There's also the odd nature of the blade weapon, whose sprites are very large and can't do much damage against restricted targets such as Gargoylediver's weak spot. If Strite is your first choice for level the remedy for that is either not upgrading twin shot to blade at all until you get there or taking the hidden freeway in that same level (fire at the bottom of the screen as the ship goes underwater, right before the extra life located at mid screen).

Continuing with the series tradition, great performances are rewarded with nice bonuses during the game and after the ending (one of the most emotional of that era in my opinion). Every surplus item is worth 10.000 points each, so getting out of your way to get all those power-ups is very important for score-chasers. At the end, every extra life and unused credit adds even more points, but the most important reward of all is the huge no-miss bonus of no less than 2 million points. Difficulty plays a part as well, with Maniac obviously granting a higher bonus in the end. Options can be seen by pressing A, B or C + START at the titles, allowing players to choose other difficulties, select distinct controller configurations and even set the default ship speed.

In one of those inexplicable marketing stunts, Sega of America decided to release the game in US as Lightening Force - Quest for the Dark Star, which obviously made me go after the original Japanese release (against my policy of always getting the Western version of a game whenever possible). I heard that besides granting a huge score addition in the end the US version also has a slightly lower difficulty. No matter which variation you decide to play, be warned that Thunder Force IV is one of the few Mega Drive cartridges programmed with region lock. The high score below was made during a no-miss run on a completely Japanese set (cart + console), Normal difficulty, and represents an improvement of 81% over my previous best. Note that beating the game unlocks several omake songs that can be heard in the options. 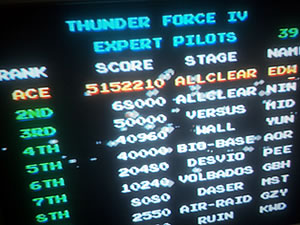