Allow me to start this short essay by saying that I almost gave up on Gadget Twins. Not once, but twice. First when I suspected it was just an action game instead of a shoot'em up (only when I realized you could fire projectiles later in the game I moved on). The second time I was about to give up was when I thought it was too hard for all the wrong reasons, the most aggravating one being the stupidly short reach of your attack. But as soon as I said "this will be my last credit in the evening and ever" I unexpectedly cruised through the game and got the clear. Talk about first impressions and deceiving gameplay.

Released exclusively in the West (US), Gadget Twins belongs to the cute'em up subgenre and can be considered quite unique as a shmup. Shooting and dodging, for instance, is rarely to be seen unless you stick to bosses or persevere into at least the third level. Before that all you have at your disposal are short-range punches used to navigate colorful autoscrolling landscapes, in an up-close sort of action game that feels really uncomfortable due to the unintuitive gameplay that requires you to press button B to choose the direction you're going to shoot/punch by using button A. And in one of the many inspirational references to Sega's Fantasy Zone, there's also the shop where you're able to buy upgrades (press button C to enter whenever you see it).

The story goes that a special gem was stolen from the king's royal room in the magical gadget land. Bop and Bump (players 1 and 2) go out on a mission to get it back from villain Thump's evil hands. This is told in a cute opening, which is followed by an equally cute closure when you complete the quest. The fluffiness transfers into the game in the form of soft, cutely drawn creatures you must defeat, from cannon fodder to gigantic bosses, and while it remains faithful to this single motif throughout the overall result is relatively underwhelming, not to say boring. I don't mind childish designs as long as they're backed up by engaging gameplay, and unfortunately Gadget Twins completely fails in that regard. 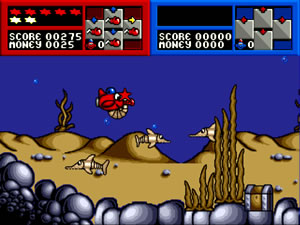 When the game starts you're equipped with weak spring gloves in all four directions, but soon a shop will appear for you to buy enhancements with the coins collected from defeated enemies (small coins = $5, large coins = $20). There's more than one shop per level, which allows you to experiment with all sorts of weapons/gadgets until you find the best ones. Up front I can say that most of them are just junk and you'd better stick with the big gloves until you find the vacuum suckers. The hammer and the yoyo are awful, with the other ones failing to surpass the big gloves or the suckers. Don't hesitate to purchase the weight for the downward attack, which gives you the ability to drop as many heavy blocks as you want and makes players feel like a super powerful version of Fantasy Zone's Opa Opa. The only other bullet-like attack, the hover mine, is so slow and useless that you need to pray for it to hit anything while you wait to fire another couple of them. Use it at your own risk.

Each stage in Gadget Twins has two bosses. They all attack with a selection of simple patterns, but some of them can surprise you with sudden ramming moves. Being patient and studying them as they appear on screen is a good strategy to prevent failure, after all they can take a long beating before the yellow stars for health fade and you put bastard Thump to run into the next huge machine. In between stages you'll enter a special bonus area if you were able to collect the BONUS item during the level. The purpose of these intermissions is to collect as much money as you can before finding the way out. However, if you fail to find the exit before time expires you'll lose all the money you gathered.

Items such as the BONUS token mentioned above are to be found by punching chests. There are also speed-ups and speed-downs, temporary shields, screen-clearing bombs, extra lives and energy refills. These refills are very important because they completely restore your health meter, which is displayed in the upper colored stars in the HUD; the white stars below the health meter indicate your current speed. Most of the time speed isn't a problem unless you accidentally collect too many speed-downs, a situation that can easily happen due to poor item visibility caused by the action and the constant scrolling. Speaking of which, if you get crushed by the scrolling effect you just get pushed forward at the cost of a little health instead of losing a life.

Coming to grips with the switch mechanic for punching direction can be a pain, one that might kill the fun factor of Gadget Twins even before it has the chance to show anything of value. Should you get through that, soon enough you realize this is yet another case where the game just gets easier as you progress. Sloppy programming is to blame: there's no correlation between new weapons and challenge increase, the game starts granting extra lives like candy and money collecting becomes completely redundant and useless. Once you get the weapons you want there's no need to buy anything anymore, and even if you have to (by failing to retake the lost weapon icon upon death) there's no inflation at all in gadget price. Since the extra money can't be used for anything else (such as turning into points upon game completion), all those bonus areas are just a complete waste of time – unless, of course, your idea of fun is to aimlessly collect coins for their inherent "cuteness".

Perhaps the only redeeming quality of this game besides the cute designs of some creatures is the soundtrack. On the other hand, sound effects are mostly mute and lack the punch to convey power to Bop and Bump's punches. Considering how clunky the gameplay is and how lame the weapons and the money scheme turn out to be, Gadget Twins can't be described as anything more than an utterly failed, almost disastrous attempt at recreating the magic behind games like Fantasy Zone. Some of the projectiles from bosses can be destroyed for points for as long as you can, which configures a broken score, but who would risk his/her sanity by incurring in such a boring ordeal?

My final 1CC score is shown below. Note that there are no options at all in the game, which tries to sell itself with the "simultaneous 2-player action" tag in the box cover. In all honesty, I seriously doubt it gets any better when playing with a friend. 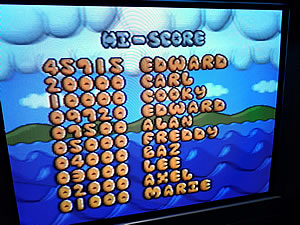