Home conversions of arcade games have been around since the dawn of the 8-bit generation. By then they could never dream of being equal to their sources, but that certainly wasn't the case when the 32-bit era came along. The ports had everything they needed to be a perfect mirror of the arcade experience, yet a few of them insisted in being "something else".

Case in question: Gun Frontier. Those who played the original arcade will definitely vouch for its savage, brutal, relentless difficulty. The game is well-known for vandalizing people's dignity with balls-to-the-wall ferocity, demanding fierce dedication from even the most accomplished gamer if he/she by any chance accepts the challenge of adhering to the simple genre convention of the 1CC. On the other hand, the Saturn version of Gun Frontier, which was part of Xing's Arcade Gears series of arcade ports, can certainly be qualified as one of the most easygoing and breezy vertical shooters in this console's library.

So we're left to wonder... what in the name of Taito happened to this particular port?

A manga series of the same name came out during the 70s, but manga and game are completely unrelated as far as I know of. In our case, the game takes place in a planet raided by pirates who're trying to scavenge its precious resources (gold!), wreaking havoc and spreading terror in the process. The player pilots a winged flying gun to stop the invaders and bring peace back to the population with the aid of a shot input (button A or button C for autofire) and bomb input (button B). The twist in this basic gameplay scheme is that you're able to affect the direction of the bomb as it leaves behind a fiery path of destruction. 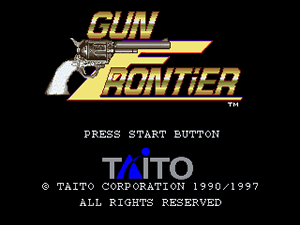 A horizontal row of five enemies descends upon the player every now and then, and for each one you kill a medal is released. Players must collect five of these medals to gain an upgrade for the main gun, whereas picking up gold bars from defeated ground targets adds up to the bomb stock. Once you get twenty gold bars a full bomb is added to the ship's reserve, but it's also possible to deploy incomplete bombs with reduced range and power. A maximum of four full bombs can be stocked, and all power-up coins in excess are saved for an immediate upgrade once you respawn after dying. Speaking of which, checkpoints are active during the levels and inactive during boss fights.

Barren landscapes alternate with cloudy skies above waterfalls and ravines in a sci-fi wild west setting that feels completely different from anything else in the genre. While this might not impress anyone in today's world of HD graphics and exaggerated explosions, the influential nature of the game's design is one of the most talked about within the hardcore community. Gun Frontier is regarded by some as one of the cornerstones of the shooting genre, serving as inspirational source for more acclaimed shmups such as Battle Garegga and Taito's own Rayforce, which came out a few years down the road and also have (excellent) ports on the Sega Saturn.

On the matter of Gun Frontier's excellence on the Saturn, I have already pointed out one of the discrepancies between port and arcade a few paragraphs above. The difficulty is severely toned down and offers nothing but a pale shadow of the original challenge, a disparity that's supposedly related to the complete absence of rank. Don't expect any of the suffocating enemy flocks or the deadly swarms of thin bullets anywhere throughout the credit. Also absent are some of the known tricks of the arcade version, such as the points you get when bombing at specific spots in the game. At least the part where you bomb the large planes in stage 2 is preserved, even though the checkpoint in this specific section has also been made different. It's still possible to milk it for successive points and extra lives since an extend is registered at every 20.000 points, another huge change that makes the game even easier than it already is.

Extra lives are very important for scoring because each one is converted into 30.000 points at the end of stage 5. A maximum of four lives is allowed below the score display, but you can get as many extends as possible. For a moment I thought the score would be broken, but there comes a point when the extend routine stops. Therefore players should not expect to counterstop the game in stage 2.

With no graphical downgrades whatsoever, especially when the game is played in TATE mode (it looks great), it's just baffling that Taito and Xing decided to add so many changes to this port. Although most people might say it's a disfigured take on the original game, there's nothing basically wrong with it. In a nutshell, it's got all the looks but takes a completely different route regarding difficulty. Good and bad endings are properly preserved depending on how you handle the awkward duel above the skies against the last boss: fail to kill him with your six shots and the credit is over regardless of how many lives you have in reserve, plus you're denied the 1CC; shoot him when his shields are down and enjoy a happy ending.

Anyway, if you're looking to put another easy clear under your belt take note of this particular version of Gun Frontier (the alternative for a faithful home conversion is the port included in the Taito Memories Vol. 2 compilation for the PS2, even though that one lacks TATE). Released only in Japan in a double jewel case, the Saturn CD also comes with a special booklet dedicated to strategies and secrets on the game, I just don't know if these are applicable to the Saturn version.

My final 1CC score is below, playing on Normal difficulty. It's an improvement of 84% over my previous best achieved way back when I didn't even consider myself a true shmupper. Unfortunately the disc has no save functionality and no further difficulty setting beyond Normal. 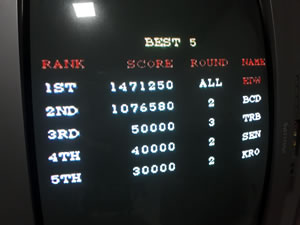