In 2009 the Xbox 360 was already established as the console to go for shmups in its generation. Nevertheless the hype surrounding the announcement and release of Mushihimesama Futari for Microsoft's console was immense. Bullet hell fans were rejoicing everywhere, myself included since I had been a longtime fan of Mushihimesama. However, upon a brief contact with Futari I thought it kinda felt too much like the first game so I didn't invest much time in it. Unsurprisingly so, I was wrong: the true nature of the sequel only starts to be unveiled once you decide to dig deep into its gameplay. And having now beaten a few of the game's modes I realize that this first impression came up due to the similar early aesthetics more than anything else (especially the soundtrack).

Besides being a great addition to the Xbox 360 library, Futari is also remarkable for its extremely gamer-friendly porting job. It was, for instance, the first Japanese-exclusive 360 title released with no region lock. And in an attempt to cater to all skill levels, it initiated the trend in Cave ports to include a "Novice" mode aimed at beginners. Granted, the content on the disc and its DLC alternatives consist in a multitude of variations of the core experience, to the point of seriously overwhelming the player with so many game modes.

Here’s a list of all variations of Mushihimesama Futari that can be played by means of the Xbox 360 disc: 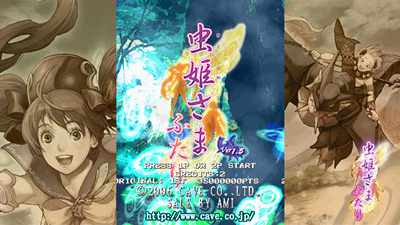 While Mushihimesama was no pushover in the realm of intensity and flashiness, Mushihimesama Futari Ver 1.5 (the full name on the game box) manages to be even flashier thanks to an amazing upgrade that results in even more vibrant colors as well as a larger spectrum of scoring possibilities. Princess Reco is now sided with a young boy named Palm, who according to the game’s story convinces her to follow him to his village. With a few exceptions depending on the game's variation, they can be chosen in solo or co-op play in both “Normal” and “Abnormal” playing styles, a choice that represents the main departure from the gameplay of the original chapter.

The three basic inputs at the player's disposal are deemed A (shot), B (bomb) and C (autofire). According to regular Cave standards, by holding A you get a focused shot that reduces the character's speed, but in Futari that isn't always true. With each choice of character you must also select the abovementioned Normal or Abnormal shot type: reducing speed by holding A applies to all character choices except for Abnormal Reco, which achieves the same effect with input C (autofire). While that is certainly cause for confusion up front, the differences in character power and shot patterns should compensate for that. And besides the several similarities with the M- and S- power variations from Mushihimesama, you can easily notice influences from other Cave titles such as Dodonpachi (Normal Palm A shot) and Ketsui (Abnormal Reco C shot).

Depending on which kind of gamer you are, diving into the world of Mushihimesama Futari can be a journey with no brief return. I say that because there's so much diversity in each of the game's modes that you might be entertained for years just trying to perfect your performance in a few of them. They're all quite addictive, and a testament to Cave's ability in producing engaging, mesmerizing shooting experiences. In order to keep things under normal conditions in my gaming routine, my mode of choice this time was Ver 1.5 Original, even though I fiddled around with all other variations and can certainly vouch for their inherent fun factor. 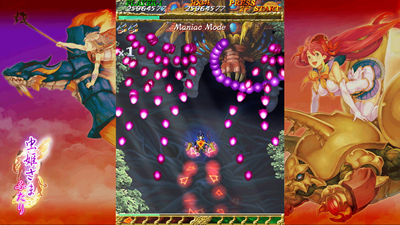 Palm takes on the 3rd boss

In Original mode bullets are faster but their patterns are less dense, as opposed to the slower but more numerous bullets of Maniac mode. Survivalwise Original is much like the same mode from the first chapter, but scoring rules are totally different. There are two counters that increase as you collect golden gems from defeated enemies, and the basic rule is that to get large gems you need to destroy your targets with the C shot whenever the hundreds digit is between 0 and 4 (green counter) or with the A shot when this digit is between 5 and 9 (light blue counter); in essence, at every 500 gem count you should switch your shot type. Enemies killed with the incorrect shot result in smaller and less gems. The large/overall counter increases throughout the whole game with no ceiling, the smaller/stage counter maxes out at 9.999 and is reset in every level. Both of them tie into multiplying the base values of your kills for higher scores, but let's not forget the end-of-stage bonuses that also contribute greatly to the scoring results.

Extensions to the basics above include the bullet cancelling nature of larger enemies (all their bullets are turned into gold), collecting gems very fast when they appear to take advantage of their green aura and higher value (either idle or C shot sucks airborne gems, A shot sucks ground gems), counters decreasing during boss confrontations, loss of gem count whenever you bomb or die and a few specifics that help enhance scoring/survival, such as maximizing icicle kills in stage 2, killing the 3rd boss and 4th midboss with the C shot regardless of counter status, destroying all ground lanterns in the final level for a massive score boost and uncovering a 1UP in that same stage (do not bomb!). Speaking of extra lives, in Original mode the extends come with 35 and 100 million points. Each life in reserve is worth 10 million points when you beat the game.

With all those bug nests, huge beetles and deadly eggs pouring over the player, stage 3 is the first big challenge in any serious credit. The slingshot effect from the slowdown moments can be a serious source of anger in that particular section, as it clearly splits the game into the easygoing preamble of the first couple of levels and the slaughterhouse that unfolds afterwards. That's pretty much when the final aspect that pushes players to their limits in Original mode rears its shiny head: rank. The higher the main counter gets the faster bullets become, with max rank achieved at the 70.000 figure. In any case, the dragon-infested village of the final stage will put all your abilities of micro- and macrododging to a serious test. Be prepared.

So much for Original, but what about the other modes? This supposedly short essay could be much, much longer, even if we stuck to Ver 1.5 only. To keep things short, Ver 1.5 Maniac mode uses a single multiplier counter and a chaining meter that work in conjunction with how you employ your shots: use C shot to start the meter and fill it until it turns red by shooting a large enemy; while red, all enemies killed with the A shot result in many more gems to be collected; these gems increase the counter to the maximum value of 9.999 (reset in every stage); to turn counter figures into points the player then has to kill enemies with the A shot when the chaining bar is empty, thus generating blue-aura gems whose base value is multiplied by the counter value; as these gems are sucked in the counter goes down, and there you go raising it up again. Yes, Maniac mode is a complicated one at first glance. However, once you get the hang of how to survive the bullet curtains and manipulate the chaining bar for best results everything starts to click.

Ver 1.5 Ultra mode is just stupidly hard, aimed at really gifted players or masochistic people. It's got the same rules of Original mode, but the overall multiplier changes status at every 2.000 count, stage multiplier doesn't max out at 9.999 and a True Last Boss appears at the end of the game (in Black Label God mode you need to destroy all lanterns in the last stage and get to the end without dying). Both Maniac and Ultra modes have no rank whatsoever, while extend intervals are of course different from Original mode. For now I'll refrain from commenting on the other variations of Futari, suffice it to say that with the obvious exception of Ver 1.01 they're all very likely to be as fun as Ver. 1.5.

The great porting job of Mushihimesama Futari on the Xbox 360 also allows all kinds of tweaks for visuals, training and special modes. Instant replay save is possible after you finish any credit, and if you play on Score Attack your performance is saved in the online leaderboards (you can also download and watch any online run). An interesting detail about this port is that it lacks conventional difficulty settings such as Easy/Normal/Hard, etc. My copy of the game is the Limited Edition, which came with an extra 2-disc arrange soundtrack for both Mushihimesama and Mushihimesama Futari.

Below is the best 1CC result I could get on Ver 1.5 Original mode, beating the game with Normal Reco and two lives in reserve in the end. Next time I'll come back for Maniac mode on Ver 1.5 or Black Label. :) 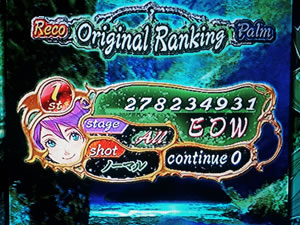