The sound of the word is neat, but what exactly is "Robocco" supposed to mean? My best guess is that it's a colorful world where robotized creatures live in and a gallant human hero named Lance battles evil robots inside a heroic robot codenamed R-10. At least that's what can be ascertained from the ending sequence, but in order to see it players must fight their way across ten stages that intercalate platforming and shooting in equal measure.

I'm not very familiar with Taito platformers from the 8-bit era, so I can't really touch on the subject of in-house connections or influences. In any case I think Robocco Wars sounds a lot like Mega Man in its platforming sections, which is of course a good thing. There's an obscure charm to them that extends to the shooting levels, all of them designed with nice variety and a few unexpected and interesting references to the Darius series. The main problem with the game, which saw release only in Japan, is that most of the time it's very easy, ramping up in difficulty and annoyance in its final level only.

During the platforming areas button B is used to shoot and button A is used to jump. Most of the time it's not possible to return once the screen scrolls as you move, which reduces the importance of exploration except for a few areas where you must fall through long shafts or need to choose between a few splitting directions or platforms. Every once in a while you'll enter a dedicated chamber to fight a miniboss before proceeding with the next area in the level, and when the stage boss appears it's often a larger mechanic foe that requires some jumping around and a little shooting to be defeated.

Surviving the challenge imposed by the mechanized enemies shouldn't be of much trouble for anyone in Robocco Wars thanks to the wide assortment of items to be collected. More important than the P for power-up, the S for speed-up, the star for temporary incinvibility and the occasional extra life are the heart-shaped items that extend the lifebar (blank heart) or refill it (colored heart for 1 refill, blinking heart for a full refill). Extensions to the lifebar are preserved for the rest of the credit regardless of deaths, plus the lifebar is completely refilled at the start of a new level. Dying comes from receiving too much damage and depleting the lifebar as well as falling into ground holes/pits (the number of lives and the ongoing score can be seen when you pause the game).

As expected, shooting sections are even more straightforward than the platforming areas. Button B is the main weapon and button A is the secondary weapon, which is either a ground bomb in the spaceship form or a vertical torpedo in the submarine form. It's not possible to fire both weapons at the same time (secondary takes preference when both buttons are held), that's why players must exert some rudimentary choicemaking at certain points. All the items from the platforming parts still apply here, as well as the frequent miniboss encounters prior to the stage boss. Due to their linearity, the shooting stages are also a tad easier and only start to show a little flair when you find yourself facing none other than Mother Hawk from Darius II. And if that wasn't enough, in the next shooting area you also have to deal with a variation of Guard Savage, one of the bosses that appears in the PC Engine Darius games. 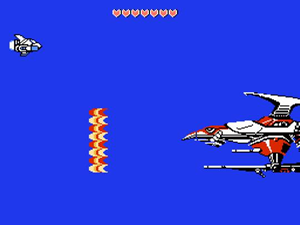 Taking power-up items will eventually bring up some more nods to Darius during the shooting areas, as seen in the wave shot and the needle laser you acquire in the second half of the game. Strangely enough you don't see these upgrades in the platforming parts, which are restricted to a few more powerfurl shots only. Dying does away with all upgrades, but since the game is so easy it won't matter much unless you're fighting a boss (boss fights are checkpoint-based, unlike the rest of the game). Mistakes are much more common while platforming, especially when sliding heavily during the levels covered on ice. R-10 seems to be subject to some sort of minor inertia, which is much worse under the ice effect.

Robocco Wars does everything right in regards to music and graphics, only with the occasional 8-bit sprite flicker. More than once you'll notice strong similiarities with Parodius, and it even adds some Sonic the Hedgehog flair in the Starlight Smile level. The walk in the park ends after two consecutive shooting stages prior to a final platforming level appropriately called Square Magic. Because "magic" is almost what must happen for you to figure out what to do in a cylinder maze that doesn't seem to have any way out. I entered multiple doors, fought the usual share of minibosses and wandered around like an idiot for a long time before realizing where the final boss was. The trick is to follow the green arrows until you see what looks like a portal at the very center of the screen.

And just to make the last stage even more out of synch with the rest of the game, the final boss is more difficult than all other bosses combined. One could say in the end Robocco Wars finally shows a boss that's worthy of its Mega Man inspiration. This odd difficulty spike might probably make you remember the game long after you've played it, since without it Robocco Wars would be just another colorful oddity in the Famicom library.

My 1CC mission was accomplished with the high score below. Note that projectile milking is possible during some boss fights, but it requires constant moving and would take forever to actually be worthwhile. 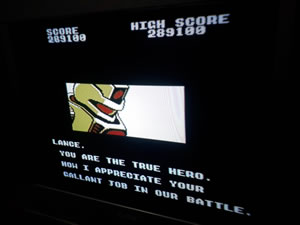