Once upon a time there was an obscure video game company named Oriental Soft. Many of its games were released in the arcades on poorly made boards that would soon break, as was the case with a 2002 vertical shooter called G-Stream G2020. Following the closure of Oriental Soft it was expected for the game to disappear from the face of the Earth, but thanks to the efforts of its main programmer and future founder of Triangle Service the source code for the game was safely preserved. With the publishing rights back in his hands, in 2013 the game was renamed as ΔZeal / DeltaZeal and re-released as one of the two titles in the Shooting Love 10th Anniversary compilation for the Xbox 360 (the other half of the package is XII Zeal).

By putting the Zeal suffix in the game's title, Triangle Service imposed a pseudo-retcon in its library and made ΔZeal the first in an unofficial series that continues with XII Zeal, Trizeal, Exzeal and the most recently released and extremely weird CombatZeal. Many aspects of ΔZeal's gameplay can be found in the sequels, so fortunately this is not just a matter of cheaply rearranging names for a little more profit. Even though the quality of their products is certainly debatable for fans of the genre, there's no denying that the much propagated Shooting Love is the heart and soul of Triangle Service, a company that has always been known as a one-man endeavor.

With seven stages, no extends of any kind and a strong mix of military and sci-fi themes, ΔZeal comes off as a seemingly straightforward shooter with some unique mechanics thrown in. The "seemingly" part is due to the dynamic branching that sends you off completely different paths in certain stages and require a good deal of knowledge to be properly treaded for survival or exploited for score. 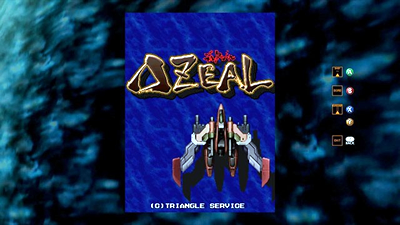 Gameplay inputs consist of three buttons only: shot, rapid shot and bomb (which I have mapped as A, B, and RB in my Xbox controller). You can actually tap shot to obtain rapid shot, but the very nature of a specific attack pretty much requires having separate buttons for them (keep reading). Powering up the ship is achieved by collecting the colored icons released at a regular interval from defeated enemies, which then fill up a 10-slot power bar from the inside out; when the bar is full each new power-up pushes the oldest one out in the queue, with the current item combination determining firepower behavior. Red contributes with vulcan, blue with laser and green with homing missiles. Getting the desired firepower formation isn't as easy as it seems though because the power-up icon has a rather fast cycling routine and it often drifts off the screen or into bullet curtains.

The only other item related to firepower that you might come across is the extra bomb. Quick and powerful, the bomb animation is quite satisfying but it doesn't grant the player with invincibility outside of its hit zone. For total invincibility and other goodies the ship is equipped with a black hole device (sometimes called void-bomb or cancel-bomb) that creates an energy sphere that melts everything that's caught inside its radius except for your own ship. In order to be able to use it players need to collect the small green particles left behind by destroyed enemies (you need to pay close attention to see them, normally no one would even notice), stacking up the green little number that appears above the power-up bar. When an OK sign is shown close to it you're ready to use the black hole by holding and releasing shot. The higher the little green number when the black hole is deployed the longer it will last.

Going from survival to scoring in ΔZeal comes naturally the more you play it. The game is a slow burner for sure, with intrincacies that only become less confusing with repeated plays. Medal chaining is the biggest source of points, for instance. Every destroyed enemy or part of an enemy drops a medal that increases in value and size provided you don't let any of them fall off the screen; it starts with 10 then goes through 20, 30, 40, 50, 100 and 500, maximizing at 1.000 points. Medals generated at the same time have the same value but add to the progression regardless (e.g. four initial ones are worth 10, next one will be worth 50).

Losing just one medal sends their value back to 10, except for one particular situation: when a black hole is deployed medals are frozen at their current value, which opens up a huge opportunity for scoring if you can manage to use it when medals are maxed out because every single bullet that's caught within the black hole is turned into a medal (likewise, creating the black hole when you have a low medal value is an obvious waste). It's a great rush to get showers of maxed out medals from dense bullet streams fired by bosses, however it's imperative to adapt to the timing of the black hole deployment since it might appear at the top of the screen if you hold the shot button for too long. That's the worst that can happen because the black hole is then pretty much useless. There's also no way to cut it short for another use, it will simply consume all its energy. Then you have to restart filling it up from scratch.

There are other scoring resources, such as collecting only one type of weapon so that once the power bar is full each successive item of the same color will give you 10.000 points. The problem is that the only worthy color to stick to is red. When maxed out it provides excellent spread and inflicts devastating damage at point-blank distance. Blue is good for medal collecting but awful for survival, whereas green hits all over the place with distributed power. This power-up scheme can be extremely annoying if you play for score because if you eventually take a different color you end up losing 100.000 points until you get rid of the unwanted item (or 90.000 points if you decide to completely change the power bar). That's why you can't be too close or over the enemy when killing it if you realize a power-up is about to be released.

The final touch in the scoring system is the quick killing of incoming enemies, which appears in small 5.000 point tags. I couldn't care less about this aspect though, sometimes I got them but most of the time I did the exactly same thing with no results whatsoever. Equally cryptic are some of the branching areas that bring up completely different sets of enemies in the initial stages of the game. I did assimilate how to get the railroad section in stage 2, but eventually learned to live with the randomness that's present in the first level. The alternate versions of stages 3 and 5 are chosen simply by sticking to the left and right halves of the screen once the previous bosses are destroyed (left for 3A/5A, right for 3B/5B).

Besides the obscure meanderings in its gameplay, ΔZeal incurs in some minor design choices that require a little patience from the player. There are many occasions where bullets are just plain white or gray, which makes visibility a chore when you're flying over similarly colored backgrounds and explosions. The safe distance from ground targets is also very limited, and it's rather common to be shot in the face when approaching such enemies. Bullet spreads with varying degrees of density are the norm when you're fighting bosses, which often cave in with well placed bombs (the 5th boss tended to drift off screen when I bombed too much; I even thought the game had bugged on me once because he took more than a minute to show up again). The minor screen tearing from the HD resolution didn't bother me at all.

Since there's no rank in ΔZeal practice soon leads to success no matter how tough or crowded some sections appear to be. The game sure has a few highlights in the graphical department, such as the huge bomber that flies over something straight out of Sonic Wings in stage 5 (the New York scramble) or the whole post-apocalyptic industrial look of the final level, but overall it's rather plain looking and pretty much serves as a preamble to what Triangle Service would deliver later in XII Zeal. The music sort of follows the same trend, with the ominous tune for the final stage being the clear highlight for me. Replay saving, online leaderboards, the unlocking of stage select (score attack), timed extra credits and several image/audio tweaks are all included in the Shooting Love 10th Anniversary region-free package, both in the regular and limited edition variations.

My 1CC high score playing on Normal difficulty is below. I chose the player 1 side (slower ship, player 2 is faster) and went through stages 3A and 5B, which I admittedly found the easiest choices. I just wasn't prepared to take a photo of the high score table, if you miss it as you input the initials you won't be able to see it again unless you score a new valid entry! 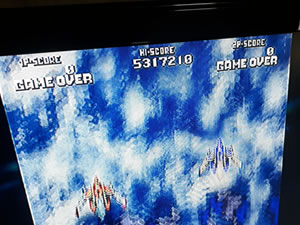