What’s interesting about the hentai in Steam-Heart’s for the PC Engine CD is that non-Japanese players might actually go through the whole game without noticing any of the sexually charged content. The problem is that the several pseudo-explicit cut scenes showing the game’s protagonists raping the defeated female pilot bosses take too long to load, have too much dialogue for too little imagery and can only be skipped in their entirety. In a nutshell, impatient pervs won't be too happy. Despite the cheaper production values, for example, Divine Sealing on the Mega Drive did a better job with its panel-by-panel skipping.

There are two characters to choose from, a guy named Blow and a girl named Falla. They're both able to fire two types of shots selected with proper items, but their attacks differ a bit: Blow has a straight laser and his vulcan shot acquires some spread when upgraded, Falla’s vulcan has no spread but her thin laser gains two spread side shots later on. Vulcan (V) and laser (L) are powered up by always sticking to the same item. Auxiliary weaponry exists in the form of straight missiles and homing orbs, which have no upgrades and always disappear when a new level starts. Temporary shields and health/energy refills complete the item gallery.

As indicated by the HUD on the right side of the screen, the ship starts out with seven energy points that can be replenished with the abovementioned refill item. However, you also recover one energy cell in every transition (stage to stage and stage to the final boss chamber). If this health gauge is depleted the credit ends, but continues and stage selection are allowed for every level you have already reached. Besides shooting, which is accomplished with button I, button II provides a secondary input that's used to make the ship move very fast in a dash maneuver – it's the same gimmick of the Rayxanber series, only without the overheating limitation.

In terms of visuals, Steam-Heart's is a game with lots of highs and lows. The backgrounds of the first two levels are so bland that first impressions might be the worst possible. The first stage is also too long, which doesn't help either. Provided you're able to get past this initial lethargy you're in for a surprisingly busy third stage though. From that point on the game picks up both the pace and the quality of the graphics, peaking in stage 6 as you face a shower of indestructible asteroids prior to dealing with a series of drone waves and bulkier ships. It's nothing fancy but it works (there's no parallax scrolling, for example). In between you'll fly over alien bases and forests while avoiding tricky enemy fire. The dash mechanic certainly helps at times, even though crowd control and clever bullet herding are still the most important strategies for those who want to succeed.


Overall there's enough action to offset the average visuals, but all things considered the soundtrack is certainly the best aspect of the game. Since the challenge in Steam-Heart's is built around quick sprays of aimed bullets and multiple enemy waves that can't always be completely destroyed, staying alert at all times is essential to not deplete that energy bar in a snap. Still you can take a good number of hits because the game throws lots of those energy refill items in later stages. 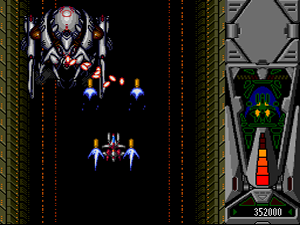 Against the mechanized clutches of the third boss

In order to skip the in-game conversations that happen at the beginning of a level or prior to a boss fight you need to press START twice, which is quite odd. Some conversation bits cannot be skipped though, and in these cases it's always good to be ready for new boss phases with cheap, almost unavoidable surprise attacks. A few bosses have two or more forms to be defeated, ranging from the quintessential large ship with several cannons to mechas that tend to mix bullet spreads, lasers, homing shots and melee attacks. They might look familiar to PC Engine veterans because they're very reminiscent of other games such as Nexzr and the Soldier series. Note: you're forbidden from pausing the game during a boss fight.

An interesting quirk of Steam-Heart's is that the weapon upgrading process keeps happening until very late in the game. That's why it's not really a good move to switch weapons at will, at the risk of reaching the final enemy without maxed out firepower. On the other hand, every single item you take gives you 1.000 points, which actually mounts to a nice extra if you aim for a high score. Score chasers are also bound to blow up the destructible parts from bosses for a few more points, of course.

My best 1CC score on Normal difficulty is below. I played with Blow and used exclusively the vulcan shot, never switching to the laser weapon. The picture was taken during the escape sequence after you beat the final boss. 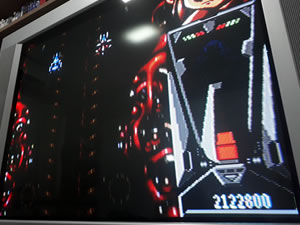