One of the most common things when it comes down to obscure Mega Drive titles, especially shooters, is the widespread pummelling most people like to give to Divine Sealing. Notorious for the inclusion of some really aggressive in-game color choices and a handful of softcore sexual imagery, this unlicensed vertical shmup does have its share of flaws but in the end it's not nearly as bad as most Internet opinions/articles make it out to be. To keep it 16-bit Sega only, look out for Earth Defense or Xenon 2 Megablast for a couple of really bad shmups. Divine Sealing tops both with ease.

If you turn on the console and let it be, the game will remain forever on the screen that displays the title. Once you press start a wall of Japanese text appears, followed by a blue-haired maiden who's about to burst in tears in what seems to be a cry for help. I always wanted to find a proper translation to English, but alas! Since it doesn't seem to exist I have come up with the idea that the player is some sort of Don Juan, to whom all women from the intergalactic federation cling to. He goes from one planet to the next exerting justice on behalf of the ladies, which in turn must grant him a private show whether they like it or not. You see, going by their faces they don't always seem to be willingly doing it. 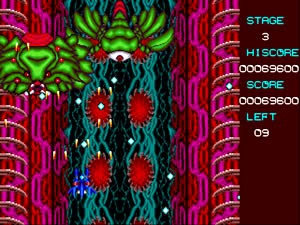 This is the 3rd boss

What’s left of Diving Sealing when you disregard the hentai stuff? The answer couldn’t be more simple: it’s a very basic shooting game with five stages and a single difficulty level. Only one button (B) is used to fire the ship’s weapon, which gets upgraded whenever you score 10.000 points within the stage itself – points acquired in-between levels for boss kills don’t count. Max power is achieved after four upgrades and resembles the famous 5-way spread of the Star Soldier games, while some enemy patterns definitely indicate that Star Force must have been one of the main sources of inspiration. After all, what we get as gameplay is a very similar scheme of wave after wave of abstract and insect-like creatures entering the screen in predefined formations.

Divine Sealing surely presents some of the worst traits common to unlicensed games, such as bland graphics and bad sound. The people behind it probably wanted to do something different with the aggressive parallax layers you see here and there. However, the problem with it is that some of the graphics underneath the ground layer are so bright and fuzzy that you can’t help but feel overwhelmed in a bad way. The worst moment is when a screen-covering white net overlaps with the parallax laden ravine-like section in stage 3, making it almost impossible to see enemies and bullets. Most of the sound design is equally awkward, with a characteristic high pitched noise you hear when your shot hits an enemy. There's also this horrible stirring sound that's used to convey the invincibility period you get when you die and the ship is respawned. Be careful with those enemies that cross the screen at blazing fast speeds, since you can die by moving into their explosion sprite right after destroying them (rare and weird, but true).

Excluding the slightly excessive speed of the ship, everything else in the gameplay doesn't do anything blatantly wrong. Levels get increasingly cluttered and busy, and when those creatures start coming from the bottom you'll certainly be thankful to the generous amount of extends. They come with the upgrades, meaning you gain an extra life for every 10.000 points. Dying sends the ship back to its default power but you might get lucky and preserve the max power short-range round pattern with the pea shot for a brief while. With the exception of that ugly 4th boss, all bosses follow almost the same naive pattern, moving or teleporting around the screen while spewing aimed bullets from wherever they are. As a result, they're very predictable and easy if the player is constantly on the move.


Hey, I want to see the lady undress!
(courtesy of YouTube user Patrick So)

It’s possible to see a few good aspects in Divine Sealing, but to do it you need to play the game to the end. The initial tone of the music is a strange mixture of cheesy and gloomy, but throughout the stages it changes for the better and ends with a remarkably decent theme in the last level. I’m sure people's overall impressions would be a whole lot better if that BGM had been used in the first stage instead (but then again, it wouldn’t fit the action’s initially lethargic pace). And behold, those crazy bright parallax layers that don't work at the beginning magically "click" prior to the last boss, creating an awesome effect that's borderline 3D without glasses. Too bad it lasts too little and appears too late.

Each side of the cardboard box for Divine Sealing presents a different cover art, and unlike most unlicensed releases it even comes with a proper instruction manual. Its rarity far exceeds its qualities as a shmup though, but from a broader point of view it definitely holds a special place in the history of obscure video games developed for mainstream consoles. Its value or impact might be trivial today, however we need to consider that today's teenagers have absolutely no idea how hard it was back in the 90s to have access to such forbidden material. Can you imagine the excitement of getting your hands on a Mega Drive game with naked chicks back in the day? I bet all kids on the block would’ve felt the same way!

Such was the need for nudity here that the developer completely forgot to also give some love to the scoring system... The last glimpse you’ll ever have of your score appears as you fight the last boss. Once the final strip-tease takes place the screen halts at the ending message and you’re forced to reset to get out there, that’s why the picture below was taken as I was about to dispatch that last monstrosity. I have managed to improve my old high score in 7%. 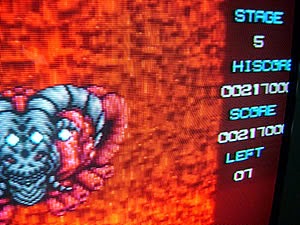