When it comes down to the cosmic roster of Marvel Comics characters, Silver Surfer is probably the coolest one of them. Initially appearing as a supporting character in the adventures of the Fantastic Four, he was the first and most famous herald of the all powerful Galactus, devourer of planets. Rising up from a tragic past and a slew of ominous duties, the Surfer soon gained his own series and more notoriety, to the point of starring in his own video game. I can only imagine how awesome it might have been for a fan back in the 90s to control such an iconic comic book character in a shmup. Silver Surfer's reputation, however, soon delved into the ranks of oblivion thanks to successive reports of extreme difficulty, which for many people was reason enough to shun the game and make it infamous for all eternity.

The question that lingered since then, at least for me, is whether Silver Surfer is indeed the beast everybody says it is. I'm a sucker for comic book based media so I was already kinda engaged before even trying the game. As soon as I put my hands on it the reason for the hate became quite clear to me: kids at the time probably weren't akin to using turbo controllers, and since Silver Surfer is a shmup that demands a steady, intense firing rate, playing it without any means of autofire would be the equivalent to video game torture. On the other hand, if you have autofire from the get go there's no reason to fret as you accept yet another heroic mission imposed by none other than the almighty Galactus.

Following the game's introduction the player must choose one of the five worlds that hide a piece of a powerful cosmic gadget. My suggestion is tackling the default order, which sees you battle through the domains of Reptyl, Firelord, Possessor, (Skrull) Emperor and Mephisto. Only when these five worlds have been conquered will you have a shot at the realm of Magik, apparently run by none other than X-Men's notorious villain Mr. Sinister – this is technically a spoiler, but one that doesn't make any sense storywise as you'll see from the visual appearance of the final boss. Each stage has three segments, with at least one of them being a vertical section where you see the character from above.

Shooting a single bullet is what button A does. SELECT triggers a screen-clearing bomb, provided you have one in stock. Button B is only functional once you get a silver orb that serves as an option and increments your firepower. It moves the orb's position around Silver Surfer: in horizontal parts the orb is switched between front, below and behind, whereas in vertical parts it's positioned at the front, sideways and behind. Additionally, with two orbs you're able to fire two additional bullet streams in vertical sections, as opposed to just one in horizontal ones. Besides the orb, which might appear from destroyed enemies or floating in fixed places, you'll also come across other very important items: F increases your firing rate and power, B gives you an extra bomb, an orange S acts as a speed-up and a silver S gives you an extra life (extends are also granted for every hundred thousand points scored).

Silver Surfer shows very nice production values. Graphics are creative and reflect the environments of the boss characters with a decent amount of detail (lame boss fights notwithstanding). The soundtrack composed by the revered Tim Follin is energetic enough to make you forgive the fact that there are only two very similar themes that repeat from beginning to end in all levels. As for the gameplay, all I can say is that Silver Surfer is a very demanding game that's best approached with an open mind. The rule is simple but allows little room for error: get shot or touch anything and you're dead meat. Die and restart at a previous checkpoint stripped of all powers you had already acquired. That said, it's important to mention that the extreme difficulty of the game is a myth. 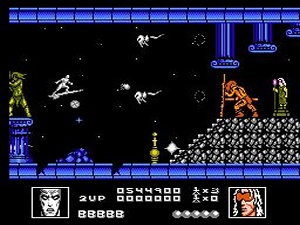 I'm well aware there are those who will fiercely contest my assessment of the game's difficulty. Many times I hear people stating it is "unfair", when in fact it's just "very strict". Yes, touching walls is deadly, often times you ram into something that kills you, the hitbox of that surfboard in vertical stages is huge and later levels tend to add enemies with erratic behavior on top of the character being clearly underpowered upon death. However, even though our hero comes out as a wimpy wreck instead of a badass cosmic entity, there are a few breathers we can rely on. The Surfer is able, for instance, to destroy some of the enemy bullets, and he can also wipe all enemies at once with a single bomb, a very useful resource that many people take for granted since it's activated by the SELECT button. After some practice the player can also hoard lots of extra lives, which is in line with the benefits brought about by successive credits. After all, just like in every classic shmup memorization is of utmost importance, especially when you realize all items are spawned in the very same place in every run.

My feeling is that Silver Surfer is a very special game in the NES library due to its particular setting. It's quite unique, even though Irem and Konami can be seen as the main sources of inspiration for gameplay and aesthetics. The game is definitely challenging and fun, frustating at times but never unfair. And the story bits shown in the introduction and in the intermission prior to the final stage are a treat for Marvel fans. Unfortunately Silver Surfer can't be played for score since it's easily exploitable by infinite milking on bosses. Those 4.000 points you get for each item picked up in excess will merely serve the purpose of gaining extends faster.

The picture below was taken as soon as the last boss was defeated. 1CC mission accomplished, now let's move on to the next challenge. 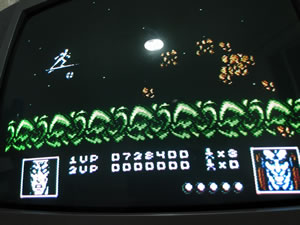