The best thing that can happen to a video game sequel is the feeling that things have really evolved and you're not just playing more of the same. I'm happy to state that Nanostray 2 is a prime example of that: a good, well designed sequel that takes the best out of the first game while moving things around a little in order to deliver a fresh, different and worthwhile shooting experience. Nanostray had flair, explosions and a nice challenge backed up by a neat sci-fi environment. The overall style and interface remains the same for Nanostray 2, but graphics are enhanced even further and stages now alternate between horizontal and vertical (which now unfold in a standard plane instead of the tilted perspective seen in the first game). Throw in a few gameplay changes and the improvement package is complete.

Another striking difference in Nanostray 2, at least for the more experienced shmuppers, is the amount of diverse influences developer Shin'en was able to incorporate into the gameplay. Think Gradius/Salamander meets Trizeal, with extra nods to games by Taito and even Cave. Of course everything is tailored to the handheld format with nice results, from the density in bullet patterns to the varying scrolling speeds you face across eight stages/planets with relatively long and varied campaigns. On top of that you're bound to listen to one of the best sci-fi soundtracks ever composed for a video game, an aspect that definitely plays a major part in understanding why Nanostray 2 is so engaging from the get go. And if you care about the story there are fully voiced intermissions between levels that flesh out the narrative quite nicely.

In every selected world you need to equip the ship before diving into the action. There are three preset speeds to choose from, as well as the choice of a special weapon and the preferred shot direction of your pods. Button A shoots, button B deploys a special attack and buttons L/R switch the position of the pods (no need to use the touchscreen at all, yay!). These pods/satellites are always absent when you start a level, but are also the first two items you get when destroying full enemy waves. That's an odd take on the weapon system, but it only causes real pressure in the Naizoh Habitat level (the 3rd one in the default order) since you must navigate a shower of organic flocks for quite a while with your pea shot until the first enemy wave appears. 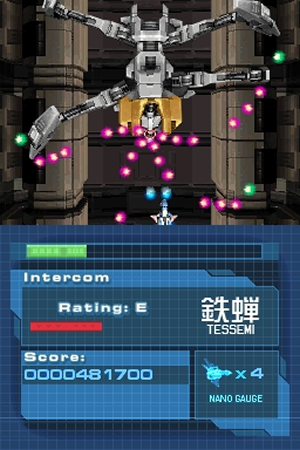 Against the bullet sprays from boss Tessemi

Once the pods are acquired every single enemy wave that's obliterated will release a blue coin that refills a slice of the special attack gauge. Larger enemies and mid-bosses release yellow coins that give you some points. Coins always drift towards your current position as soon as they appear but never change course, so take that into consideration if you want to plan on getting them before they disappear (there's no attract effect as in the first Nanostray, unfortunately). The other item you might come across is the 1UP, which will only appear once per level if you happen to be on your last life. Pods aren't lost upon death if you have already got them within the stage.

Speaking of which, stage structure is always the same regardless of the scrolling orientation. Halfway into the level you must defeat a mid-boss, with a stage boss waiting at the end. An energy gauge tells you how much damage you must inflict before they fall, and in the case of some bosses the confrontation does seem a little longer than usual. These are the only moments where the game drags, but fortunately most boss fights are quite fun, requiring unique strategies from the player. The battle against second boss Tessemi, for instance, is one of my favorites because it's very claustrophobic. The overlapping pattern of fourth boss Ishigani om the other hand demands quite a few twitchy dodges, which is always a fun thing to have in a vertical shooter.

Completely up to the player's approach is the choice of special weapon. Their energy drainage of the special attack gauge varies, but since you're always refilling it with blue coins that doesn't pose any serious restraint in the long run. Each of the first three levels unlocks a new special weapon, so by the end of the third stage you'll have all six types available for selection. More important than the choice of special weapon, however, is your strategy for satellite usage. Knowing where the enemy is coming from is of course imperative, but beware of a minor dead zone up close to the pods where your firing stream does not do any damage. Enemies might get through it and inevitably kill you.

Nanostray 2 is a game that excels in diversity from beginning to end, especially with regards to the enemy gallery. Every level is unique, and some of them are just plain beautiful to look at. The sewer level, called Kohai City, is a prime example of amazing graphics, exquisite stage design, intelligent 3D modelling and outstanding music. Himuro Base, the final level, feels like a natural extension to the initial moments of Gradius Gaiden mixed with several other elements of Konami's most famous shmup frachise. With these observations I have come to the conclusion that in the case of Nanostray 2 stage highlights are in the horizontal sections, whereas vertical levels shine a little more during boss fights.

The main mode in Nanostray 2 is Adventure, where you select stages and play them all until the end. Each level won is then unlocked for individual play in Arcade mode. Strangely enough, high scores are not tracked/memorized for Adventure mode, only for Arcade mode. The scoring system doesn't seem to change between them, and is primarily based on chaining enemy kills according to the time limit of the "nano gauge" (imagine a less strict Dodonpachi-like system and you get the picture). Unfortunately only Arcade mode includes some sort of visual aid for players to track their chaining progress, in the form of tiny multiplier tags that appear when enemies die. Adventure mode has no indication whatsoever, so I just tried to come up with a general sense of timing and worried only about destroying full waves to get their rewards (blue coins are also worth a few points). No end-of-stage bonuses exist this time around, unlike what we got in the first Nanostray.

Other variations available besides Adventure and Arcade (which also serves the noble purpose of single stage practice) include Challenge mode (where you must fulfill several short missions in order to unlock four simulators), Simulators (which consist of the mini-games unlocked by completing Challenge mode) and a couple of two-player distinct modes to try out with a friend. Given the fact that all simulators were available when I checked them out and I hadn't completed any challenge, I suspect that once you beat the game on a single credit they're all unlocked at the same time.

Except for the missed opportunities related to the scoring system, Nanostray 2 is by all means a truly awesome game. I beat Adventure mode on Normal difficulty with the final score shown below (pause as soon as the last boss dies or you won't be able to get a picture of your score). I followed the default stage order and used special weapons seeker in stages 1 and 2, pulse in stage 3 and spin for the rest of the game, with speed set to 1 and no alteration of pod positions from beginning to end. 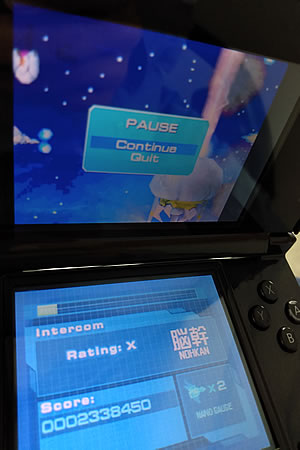 Next in the Nano series of shooters is Nano Assault on the Nintendo 3DS.
Posted by Edward at 12:43 AM