Created by a talented cartoonist during the 80s and based on a famous Brazilian children's song, Sapo Xulé (which translates to something like "Stinky Feet Frog") was adopted by Tectoy and promoted to a local mascot a few years later. Starting with a plastic frog toy that exuded a bad odor when stripped off of his sneakers, the company soon followed with three video games released exclusively for the Master System.

The stinky detail about these games is that they are all official hacks, meaning they were all hacks officially endorsed by Sega at the time. Sapo Xulé Vs. Os Invasores do Brejo is a hack of Psycho Fox, whereas Sapo Xulé - O Mestre do Kung Fu uses Kung Fu Kid as a basic mold. In the case of Sapo Xulé - SOS Lagoa Poluída the game in question is Astro Warrior. The latter is also the only one that got an European release in Portugal.

All Sapo Xulé titles are nicely packaged in late Master System boxes, with sympathetic art, specific instruction manuals and rather detailed backstories. They are nice collector's items in their own right, but all they offer in terms of gameplay is an experience that's identical to the original template. In SOS Lagoa Poluída (or SOS Polluted Pond), Sapo Xulé must battle three underground areas in order to free his environment from evil greedy scientists. Astro Warrior's star-dotted backgrounds are recolored in green to resemble a swamp, and all sprites of the enemy gallery get replaced by cartoony renditions of garbage and a few random objects. 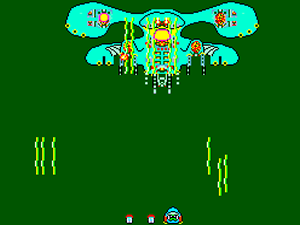 As you fly over terrain that resembles Star Soldier you can shoot around at will and collect the items that arrive floating in the middle of the screen. Even though these items seem to come at random spots as you play, they are actually spawned by destroying successive ground tiles. A red pepper serves as speed-up, a funny face is the power-up and a tiny thingie grants you a trailing option to increase firepower. It takes two power-ups and two options to achieve max power, with plenty of speed-ups to send you rocketing around the screen if you so wish. Beware not to let the option item pass by, if that happens you won't have the chance to collect another one for the duration of the current life. At one moment speed-ups stop appearing, but power-ups keep coming no matter how long it takes for you to pick them up.

By trying to make a sci-fi shooter look like a wacky cute'em up, Tectoy was only able to go halfway and doesn't really succeed. Sure, you will be shooting at rotten apples, dirty boots, banana peels, watermelon slices, amoeba flocks, matchsticks and other unidentified flying objects. Boss sprites are retouched in order to look like vehicles piloted by creatures from the pond (the detail of final boss Sblug's ugly face inside the cockpit is nice, for example). But that's it, essentially. Bullet patterns are unaltered and the music is unchanged. It's just like having a regionally different Astro Warrior. We couldn't ask much from a hack anyway, I guess.


Sapo Xulé to the rescue!
(courtesy of YouTube user Anarki)

With just three stages, Sapo Xulé - SOS Lagoa Poluída is a rather short game that loops forever, as I mentioned above. Difficulty is already maxed out on the second loop, however playing marathon runs isn't a trivial endeavor simply because recovering from deaths can be quite tricky. Blame it on the extremely slow default speed of our poor little stinky feet frog. And once all four extra lives are gained you won't get any more extends (the extend interval is 50.000 points, but note that the current score is only shown in between levels).

In my pursuit of a better performance in the game I had a few surprises. The first one was that upon beating Plurb again in stage 6.1 I noticed my score had rolled over on the mark of one million points. Suffice it to say my will to continue playing faded right there and then. However, upon reverting back to the start screen I found out the game actually has a counterstop on 999.900 points, as we can see in the picture below. Upon a quick research I discovered that this is also the case with Astro Warrior. Well, better late than never, I guess. Nonetheless I did have fun with SOS Lagoa Poluída, and I believe achieving the counterstop in either version still stands as a fun little challenge for all Master System owners. 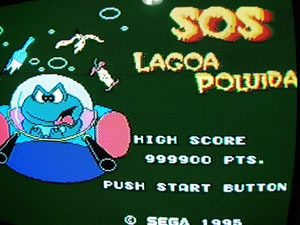