We all know that being late to the party often comes with some sort of loss, and chances are we’ll end up partying alone. Nevertheless there are occasions when this is actually a good thing, as in approaching a game that had a healthy share of praise and fame in the past only to find out it’s actually very disappointing at its core. And by keeping a distance from hype one gets to know the real content beneath raving reviews, nostalgia patrolling trolls and any sort of rose-tinted glasses devised by gaming or marketing phenomena.

In my humble ignorance for a long time I thought Star Soldier was originally an arcade title, mostly because it’s considered to be a spiritual sequel to Tecmo’s Star Force. Only very recently did I know that Star Soldier was actually born on home platforms, more specifically the NES and the MSX – since I can’t precise which one came first I’ll assume both were released simultaneously by Hudson Soft in Japan in 1986. For some reason I can only relate to clever reading of audience preferences back then, Star Soldier became very popular and spawned a series of similarly designed games, some of them as spin-offs and some as proper sequels.

Having played this for the first time ever, I was left wondering in what sort of trance gamers in the 80s were to even consider it a good game since almost everything about it rubs me the wrong way. Just for the sake of comparison, in my opinion Star Force for the NES is leaps and bounds a more pleasing experience in its basic yet brutal simplicity. 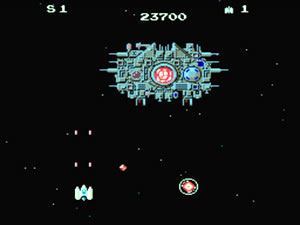 On the outside Star Soldier looks a lot like Star Force. In every stage players fly through outer space then over terrain, destroying ground blocks and a series of different enemies that arrive in specific formations. The order of the enemy waves is always the same and no wave (or wave group) appears before the previous one has been obliterated or has left the screen, that’s why after a while you can have different enemies in the same places even between stages. The normal boss to be faced is the star brain, but every four levels you’ll be fighting a larger boss called super star brain. A hidden timer exists for every boss fight, and if you take too long to beat the boss you’ll have to replay half the level in order to have a second/final go against him. And if you time out again the boss will start to shoot nasty homing bullets.

Bullet count and overall enemy aggression is slowly increased as you make your way across 16 stages. These are of considerably repetitive nature since there’s no special aspect at all about the graphics, which basically just change colors and tiles from beginning to end. When you hit little Ps on the ground you release a floating S icon that serves as the basic power-up: the first one works as a speed-up and a firing rate enhancer, the second one adds an additional stream to the main shot an a single rear shot (2-way) and the third one grants the ship with the famous 5-way spread shot the game became known for, as well as providing a shield that protects the ship against bullets (collisions are fatal). Further power-ups will work as smart bombs and kill all enemies on the screen.

Besides the S power-up there’s also an extensive gallery of hidden items to be discovered, and this is one of the many aspects of Star Soldier that I seriously dislike. Just thinking about it makes me angry because what’s the objective point of having an item hidden in the scenery but only being able to uncover it if you have a certain combination of digits in your score? Make life unnecessarily harder, suck the fun out of the game? In all my sessions, for example, I was simply unable to collect any of the 1UPs even though I knew exactly where they were! I won’t discuss how you’re supposed to unveil this or all the other hidden tiles in Star Soldier, so I’ll just recommend the reader to check the Strategywiki page on the game. Suffice it to say, I think I haven’t dug up any of the other items except for a big P (instantaneous maximum power) maybe once or twice. It sucks, but at least you get three score extends at 50, 200 and 500 thousand points...

That being said, would it be okay to say that I probably lacked the patience to really appreciate Star Soldier? I don’t think so, especially when I remember how I first felt when my ship wasn’t able to shoot. When I started playing I thought those bursts of unresponsiveness were due to a faulty controller, but then I noticed there are chunks of the scenery where the ship “hides itself” from the enemy. It wouldn’t be that bad if it weren’t for the fact that you also can’t shoot while covered. Knowing when this cloaking effect will take place is impossible because there’s no clear border anywhere, and until you realize what’s really going on confusion kicks in hard, with the ship resurfacing over enemies and precious items being out of reach. Tip: if you find yourself hidden get out from the closest border and you’ll be able to fly back over the terrain.

What makes me really sad about this game is that it comes out as a missed development opportunity over all the good there was in Star Force. As if the above annoyances weren’t enough, if you get hit with the 5-way weapon the ship is downgraded to 2-way but the next S item won’t restore 5-way. In order to recover the 5-way shot you need to take another 4 hits to lose the shield, only then being able to collect the S for the 5-way upgrade (successive power-ups while shielded in this condition will only result in the smart bomb). If things become too hectic while chasing bullets in order to get hit, guide yourself by the music. There are only two BGMs in the whole game after all, one for a default-powered ship and another that plays while you have an active shield (there's a very brief window of invincibility when you lose it).

Given all the weird traits I pointed above, what’s left to go for in Star Soldier? I’d say try to kill everything possible, including the big head that materializes from four pieces before these pieces are put together (80.000 points). There are six hidden X tiles in each stage that can be easily uncovered and destroyed while increasing in value, and if you find them all the last one will be worth 80.000 points (don’t wait to destroy them in the lower half of the screen though, they become “invincible” in their way out). And if you manage to blast both big eyes that precede the boss fight at around the same time you’ll also get 80.000 points. Lastly, don’t even think of entering the battle with a stock controller… Turbo function is a must, otherwise you can kiss goodbye to most of these bonuses.

Honestly, I don’t think I was ever this annoyed with an NES shmup. I don’t find the idea of hiding hidden items even more the least bit fun. Being hit to power back up again? No-no. Being prohibited from shooting? This last aspect only made a little sense in the last quarter of the game. At that point enemies start spitting the same timeout homing bullets from bosses, which remain on screen for a few seconds chasing you around and to which hiding beneath the ground does become a valid resource (another way to avoid the homing missiles is to downgrade the ship to its default firepower).

Compared to the evil difficulty of predecessor Star Force, Star Soldier is at least fairly manageable. Both bullet count and enemy speed aren’t as crazy, and the few overlapping waves aren’t nearly as brutal. I’m glad I’m done with it and I just hope the next chapters aren’t as annoying as this one. When the last super star brain explodes you’re treated with the following screen showing your completion score. I played it straight and didn’t time out any boss. The next game in the series is Super Star Soldier. 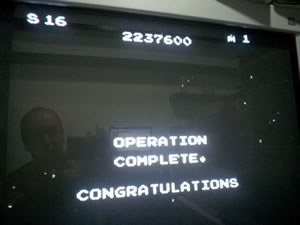