The Time Bokan Japanese anime series received many chapters since its debut on Fuji TV in 1975, courtesy of Tatsunoko Productions. Since then many video games appeared based on the franchise and its characters, of which some of the most awkward are Bokan To Ippatsu! Doronbō and its direct sequel Bokan Desu Yo, both released for the Playstation only in Japan. Translating to something like Time Travelers (or Time Fighters, as it became known in English), Time Bokan is a wacky cartoon with well defined characters for heroes and villains.

An interesting detail about the abovementioned games is that players take on the role of the Doronbō Gang, the official villains of the second Time Bokan series (Yatterman). Although odd at first sight, this choice actually comes from the fact that these clumsy villains were by far the most popular characters in the history of the anime. In Time Bokan Series: Bokan To Ippatsu! Doronbō (the game's full name) the gang goes against several main heroes of the franchise, so at least in a video game they finally get a chance to succeed in their comically villainous endeavors. Besides, that bossy female leader called Doronjo is certainly sexy, I'll tell you that.

Judging from a few descriptions I read, the game is aesthetically very faithful to its source material. It also includes lots of low-res cut scenes depicting the three members of the Doronbō gang plotting their evil deeds. The game itself is quite a colorful cute'em up and visually reminds me of stuff like Detana!! TwinBee. I have no idea how successful the Time Bokan series was back in the 90s, but since fan service is so strong in this one I assume the game must have been at least a minor hit with Japanese audiences back then. For me and practically for everyone else, these days it just comes off as an obscure oddity whose gameplay intricacies still remain rather misunderstood. 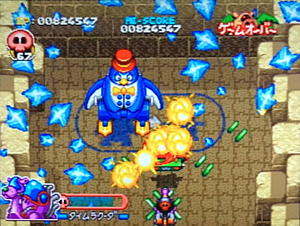 One of the mid-bosses in stage 6

For each stage the player must select one vehicle from an initial assortment of six (after the third level another three become available). Each vehicle has its own firing pattern and different stats for power, movement and shield/health, with basic commands in the form of shot (×), bomb (□) and a "fast dodge" (L or R). They're all standard shmup fare, except for the bomb. In this game bombs must first be armed: a first press of the button brings it out from the vehicle, which then carries it around until you press the bomb button again to actually use it. In flying and swimming areas bombs go out as straight missiles, whereas over regular terrain they're thrown in front of you with some minor aiming capacity.

Another uncommon trait for bombs in Bokan To Ippatsu! is that they are unlimited. Bombs are great to eliminate minor and medium-sized enemies, but be warned that they don't come with any invincibility. Shot and bomb can be used at the same time, but if a bomb is armed you won't be able to use the fast dodge command. Even though it's seemingly pointless, the fast dodge actually makes the player invincible at the cost of a brief period of recovery. It's a very important resource against some of the trickiest bosses.

Most of the items you come across in the game are the skulls left behind by defeated enemies. Silver skulls add +1 to the skull counter, golden ones add +5. Once the counter reaches 100 the vehicle transforms into a huge invincible mecha that's able to wreak havoc anywhere in the screen as the counter decreases. When it reaches zero the mecha then reverts back to vehicle form and the shield bar is fully recovered. Other items are either released by special skull carriers or by selected enemies: power-up (D), health refill (green/blue birds), temporary turbo speed (pink cat), power down (a dark helmet), point bonus (diamonds), extra credit (potion) and vehicle reassemble (a shining helmet). This last one only appears after you've lost the vehicle and the Doronbō gang is forced to ride a bike with very limited firepower.

Being forced to ride the weak bike is the worst thing that can happen in the game because in this condition the next hit means GAME OVER. Such dreadful downgrade only happens under one circumstance: getting hit while carrying a bomb. No matter how much health you have, even with a full shield bar you will be forced to go into bike form if you get hit with an untriggered bomb armed over the vehicle's hull. And now we come to the fine line between survival and scoring in Bokan To Ippatsu! Doronbō: the more enemies you're able to kill with a single bomb blast the more points you get from multiple score tags generated. By bombing you also get a lot more skulls to fill up the skull counter, even though skulls aren't worth any points whatsoever.

Once you realize that killing enemy flocks in a single blow is the secret to more points, timing bombs well becomes your main objective if you're a high score chaser. However, the punishment for getting hit with a bomb on your hands will certainly make you think twice in crowded areas. The only way to avoid the bike downgrade completely is to never use bombs, an approach that suits some of the hardest parts of the game such as the high speed chase full of mines in stage 5. Using bombs on bosses is only relatively safe when you do it in between those types of attacks where they leave the screen for a few seconds.

With a learning curve that provides a good incentive to get to know the game well, Bokan To Ippatsu! Doronbō offers quick fun and is rather competent as far as variety goes. Those huge bosses and mid-bosses are the natural highlights and main sources of difficulty, at least until you figure out how to deal with their attack patterns. Bullet count is never overwhelming but bullets might get clouded by your own firing and bombing sprites, so that must be taken into consideration. If you're down on health the best way to recover is going into mecha mode, that's why sometimes it's good to keep the skull meter close to 100 if you want to get back on your feet at specific points in the game. Just bear in mind that constantly turning into huge robots is detrimental to scoring since you can't use bombs when in mecha form. 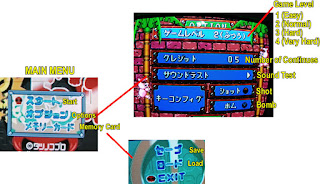 Click for the option menus translation for Bokan To Ippatsu! Doronbō

My favorite vehicle is the last one to the right from the group of extra three. It's kinda slow but also extremely efficient once you reach maximum power (it takes three Ds to max out firepower in every level). Too bad you can't pick the same vehicle twice in a row, because once it's used it must "rest" / go for repairs for the duration of one stage. Co-op play is possibly quite amusing if both players know what they're doing since they're able to cover a wider area of the screen together. The horizontal span of the game is wider than a single screen, so when playing solo you'll often have to choose from deviating or splitting pathways.

Bokan To Ippatsu! Doronbō comes with basic features such as a manual save/load function and the ability to remap buttons (only shot and bomb). The game received an enhanced port for the Sega Saturn two years after its release under the name Bokan To Ippatsu! Doronbō Kanpekiban, which I should be checking out in the near future. For now, my best 1CC result on the Playstation version is below (Normal difficulty). Bear in mind that the act of continuing does not reset the score in this game. 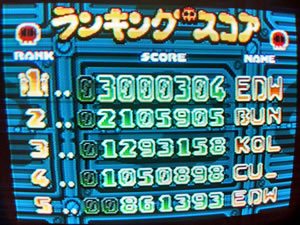