Even though video games tend to be easily categorized in genres, some titles clearly defy the norm with offbeat gameplay. SDI, Tekkaman Blade, Rez and Gadget Twins are notable examples I have tackled in the past and somehow made me question if they should actually be considered shmups. And now TRL - The Rail Loaders makes it into this special list with its unique approach to the vertical shooting subgenre.

First and foremost, this game is disappointing no matter the genre it belongs to. You play as a train that moves on rails, so you don't have freedom to move around as you wish. You shoot and exert some minimum degree of dodging as you glide through predetermined tracks, only gaining full control of your movement during boss fights, the only parts where you play in a regular shmup-like environment. The Rail Loaders is also unremarkable in every design aspect, no matter how weird it decides to get throughout its five stages.

The oddball nature of this game probably comes from its Korean roots (see this page for reference). Yes, the whole package is in Japanese, but there's practically nothing of the Japanese school of thought in the game as far as shmups go. 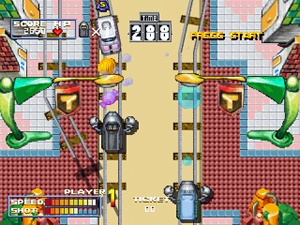 Moving your train forwards and backwards is possible at all times, so there's no need to worry about coming to dead ends (unlike a hauntingly similar gimmick in Xenon 2 Megablast). Just watch out for the timer because once it reaches zero the game ends abruptly. Button × is used to shoot, button □ makes you jump and button ○ punches levers to switch track directions. The shot sprite is a slow-moving bubble that's perfectly tuned to the overall pace of the game, and since it lacks autofire you'll either need to mash that button hard or arrange some sort of turbo function. In single player mode your train shares the screen with a second train whose control is taken over by the computer AI. This companion starts the level on the other side of the rail tracks, moving and shooting on its own while following you up and down. He's invincible but not very smart, so don't count on him to do anything for you.

The purpose of the bubble shot is to actually engulf enemies and make them float away, one of the most obvious indications that the developer took on a childish tone to the overall appearance of the game. Powering up is achieved by collecting P items, while powering down happens whenever you pick up the mushroom or when you get hit. Every life has two health cells, and new lives are granted for every 10.000 points you're able to score. The gallery of regular items also includes speed-up, speed-down, hourglass (to increase the timer), medical kit (+1 HP) and lots of things that give you a few points (candy, gold coins, gift boxes, popcorn). Tickets collected are accounted for so that they are traded for time in secret bonus areas located at specific dead ends. Note that the AI-controlled train is also able to help you out in picking up these tickets.

The dark medical kit (that looks like a coffin) must be avoided at all times because it takes away your health, but you also need to watch out for a brown invincible fluffy thing that moves down along the rails. Any unwanted contact is avoided either by jumping or by moving backwards. Finally, hitting specific enemy trains grants you with special weapons such as a straight or a 3-way pattern shot made of musical notes. Both are very efficient but are lost immediately if you get hit. If you manage to reach bosses with them they'll be gone very quickly. Weak points on bosses are either the star(s) on their foreheads or the eyes, never mind the triangle laser formations that pulsate and make the fights confusing at first.

Amidst its sleep-inducing gameplay and some unexplained weird details (such as your shot randomly sending items to the other side of the screen), TRL - The Rail Loaders occasionally comes up with something that tries to infuse some variety into the short yet repetitive design. Once you get into the cemetery area, for instance, it starts raining while harmless ghosts emerge from the ground and try to slow you down (bats do the same thing in the tunnel area). The rain effect is actually kinda cool, the only problem is that it's as slow as the rest of the game. The final theme park stage is split in two halves by an inexplicable "roller coaster" section where players control a bulky vehicle in a straight line while avoiding blocks that move left and right. This is the only checkpoint-based section in the whole game, but the good news is that just like in the rest of the credit this part is extremely easy once you get used to how fast you're supposed to move.

As if the mediocre gameplay wasn't enough an indication of the substandard ilk of The Rail Loaders, the disc is also completely devoid of any noteworthy functional resources. The only thing you'll find in the options screen is the possibility to reduce the volume of the music, and that's it. I believe one could try to maximize scoring by pursuing optimal routes, assuming boredom isn't a problem for those brave enough.

The game doesn't even have any sort of high score table, so the picture below was taken by pausing right after the final boss went down (60.9000 points). 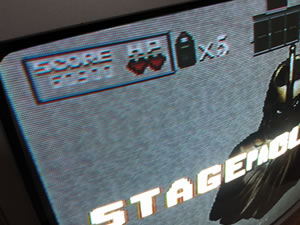